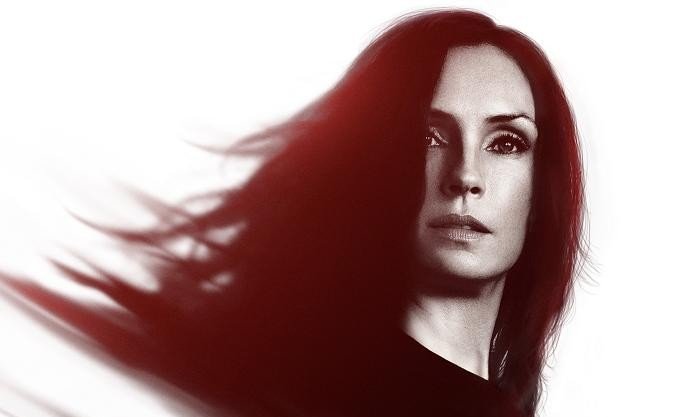 Famke Janssen stars as Olivia Godfrey in Hemlock Grove, the horror monster mash-up with family issues. Famke is a fantastic talent and has numerous roles of note, but our audience will always have a fond place in their hearts for her as Jean Grey from the X-Men films. Season 2 of Hemlock Grove will debut in its entirety this Friday July, 11th and sees new showrunner Charles “Chic” Eglee taking over the reigns. “Chic” will bring his vision to the show along with a hefty resume including Dexter, The Shield, The Walking Dead, Dark Angel and the forthcoming Playstation Series Powers.

Netflix was kind enough to give me time to speak with them both in anticipation of the new season, so read on to hear all the gory details, and beware spoilers from last season’s finale.

Olivia went through some pretty traumatic events in the Season 1 finale. Is she still that same conniving instigator for Season 2?

Famke Janssen:  Well, she’s been humbled. With what happened in Season 1, it’s not a surprise to anybody from when we last saw her in her body bag with her tongue ripped out by her son, obviously coming back from that is a bit of a humbling experience. Having to re-learn how to speak, having to be a bit more at her son’s mercy, having to relinquish some of the control to other people. The outside world has attacked her in a way, because she’s always been on top and always in control of things. So some of those things have changed. Things are different. It’s a harder, but also more interesting, way to see Olivia.

Charles “Chic” Eglee: It was really excited to write for a character that has been so traumatized physically and emotionally. That’s a life-changing series of events for anybody. So to have that happen to Olivia, you have to question how does she carry herself after that, and in what direction.

Stepping  in as showrunner for Season 2, what did you feel most excited about that you could bring to Hemlock Grove?

Eglee: I think just having the opportunity to walk into this incredible environment that was generated on film last year, it was so haunted and haunting and evocative and beautiful, and then the opportunity to work with these gifted actors. It’s such an exceedingly well cast show with people that are so good at what they do and really exciting to write for.

I don’t come from a particularly “horror” background – early on I did some work with Roger Corman, but mostly I came out of social realist storytelling – so to bring that paintbox to this world is really kind of fun. It was just writing about characters, writing about people in the real world. So all of the phantasmagoria of Hemlock Grove, if you approach it as somebody’s day-to-day real existence, it takes on an adrenalized quality in the writing, and it was just fun to do that where anything can happen.

Do you both view Olivia as a redeemable character, or do you just enjoy playing her off as simply pure evil?

Eglee: Oh, I don’t think Olivia is simple or one-dimensionally evil at all. Even people that history judges as being evil or demonic, they never wake up thinking that they’re bad people. Olivia has kind of lived her life…

Janssen: I think as an actress, certainly when you look at a character you try to fall in love with this person you’re going to embody for a long period of time, especially in the case of a series, you find what you think are the redeeming qualities in this person. Of course sometimes some people are extremely happy to wallow in this misery, others in this state of being evil or whatever comes with that, but a character like Olivia is so incredibly complex.

Season 1 had the “vargulf” (werewolf) and obviously the interpersonal conflicts, but will there be a “big bad” as an over-arcing threat for Season 2?

Eglee: Yeah. Obviously “the money” in the show is really what happens with our characters, jointly and separately, what they are going through individually, but the idea that we are putting some sort of external stress on them as a unifying field for the season is something that we do. I learned the term “big bad” while working on Dexter. It gives you a unified field of action, gives the season a motor behind it, it’s a way to put all of our characters in motion against each other with something infringing from the outside.

Famke, you haven’t consistently done TV work outside of your role on Nip/Tuck. What goes into your decision to commit to long form of storytelling like Hemlock Grove?

Janssen: I think that we’re in a really exciting time in the entertainment industry. I just realized that in the last five years or something, we went through such a tremendous transformation where all of a sudden independent films took mini-steps back, it was really hard to get them into theaters. Then of course with the start of On-Demand and watching a movie, the same day it came out in the theater, on your television and these endless amounts of content available to anybody at all times, that movie theaters became for event movies like the X-Men films.

All of a sudden everything was changing around us and then comes the Netflix model. Of course, television was already showing that filmmakers were turning toward it as a storytelling medium – it’s just a big way to tell stories – but part of this whole Netflix model is that the quality of every part of their storytelling is on-par with the best films that are being made right now. A-list writers, directors, producers, actors, production design, music, you name it. All of a sudden it opened up this whole universe for all of us to explore.

Obviously, it was a long time ago that it was taboo or you were typecast as either television or movie actors, all these lines… everything is gone now and it’s prestigious to be part of a Netflix show. It’s a really great opportunity for us to explore that kind of storytelling and the new challenges and benefits that come with it. All of the eyes in the industry are on Netflix and what they are going to do next. How is what they are doing successful and not successful?

So it’s really exciting to be a part of that, and of course as an actor it enables you to act consistently for a long period of time. Not constantly going out and having to look for another job, wait for the phone to ring, whatever. For me the most exciting part is to be a part of something that’s new and exciting and really high quality, with tremendous filmmakers.

Eglee: Famke talks about how there is a certain novel-esque quality to this storytelling, that you can tell a story over time in many increments. The thing that drew Jim Cameron to TV some years back when he and I did [Dark Angel] together, he said “We finish a movie and just as we started to understand the characters and know them, and like them, and fall in love with them, the movie is over.” The idea is that in television these stories can continue on over time, over a course of years over many seasons, in which you can continue to excavate and pull back the layers of the onion. It’s very exciting.

Going back to what Famke said about looking for a job, will there be threads left open at the end of this season to continue for a Season 3 or did you try to tell a self-contained story?

Eglee: No more stories, it all just comes to a grinding halt. [laughs] No, with characters as rich and wonderful and with actors as gifted and as the ones we have, the television gods will let us know. But yeah I think these characters are so rich that they could go on and on to continue to surprise and entertain us for many years.

Season 2 of Hemlock Grove will debut in its entirety on Friday, July 11th, exclusively on Netflix.