Movie Review: ‘Dawn of the Planet of the Apes’ 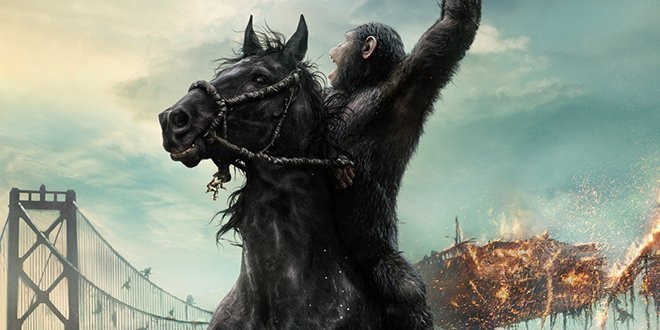 Nearly three years ago, just a few days after officially launching this website, I posted my review of Rise of the Planet of the Apes. It was the first film that I had reviewed in a professional capacity – although admittedly the term “professional” is loosely applied in my case – but also served as the launching point for one of the most enjoyable and rewarding periods of my adult life. So it only makes sense that I would insist on being the one to review the sequel, as it feels somewhat like coming full circle.

Dawn of the Planet of the Apes picks up some 10 years after the events of the first film, with human civilization decimated by the outbreak of the ALZ-113 virus, colloquially known as the “simian flu.” Survivors have hunkered down in refugee camps, and a complete lack of basic resources and infrastructure has left once-thriving cities like San Francisco overgrown with rust and moss, not unlike a scene from post-apocalyptic video game The Last of Us.

Meanwhile, Caesar (Andy Serkis) and the apes have prospered, establish a sprawling community in the forests of Northern California. Genetic enhancements have been passed to their offspring, allowing for the development of a rudimentary communication system that combines sign language and spoken words. The apes hunt wild game to feed the village, and elder members of the primate community teach a basic code of ethics, with “Ape Not Kill Ape” being the most important lesson.

It’s been two years since the apes have encountered a human, but when a small group of survivors stumbles into their domain, it doesn’t take long for all hell to break loose. The humans are trying to gain access to a dam, hoping to restore functionality and route electricity to their encampment in the remains of San Francisco, but a terrified and trigger-happy member of their party immediately sets the stage for violence. The act is forgiven, much to the chagrin of Caesar’s lieutenant Koba (Toby Kebbell), whose lifetime of laboratory testing has left him with a battery of scars both physical and psychological.

While Caesar agrees to allow the survivors passage through their land in hopes the apes will be left in peace, Koba’s distrust of humans and thirst for revenge sets events on a fairly predictable, but no less effective, collision course between the two factions. Caught in the middle are Caesar and his human counterpart Malcolm (Jason Clarke), a former architect who appreciates the need for cooperation between the societies, and who recognizes that the value placed by the apes on life, family, and a supportive community are ideals the humans could stand to learn from.

Experienced moviegoers will be able to spot significant plot points from a mile away, but while some elements of this story may feel familiar, it’s never been presented quite like this. The protagonists may be primates, but never before have computer-generated beings felt so human, a testament to the combination of motion capture technology and staggeringly emotional performances from Serkis, Kebbell, and the rest of the cast. Serkis in particular continues to prove himself as one of the most talented actors working today, and it’s a shame that his performance will leave him ineligible for a Best Actor award when Oscar season comes around.

Director Matt Reeves hasn’t made the sequel that most people would expect, with the apes cast in heroic roles opposite their human oppressors. Instead, neither side of the conflict is painted as wholly virtuous or villainous – instead, Dawn of the Planet of the Apes explores the capacity for good and evil in all of us, and manages to pepper in a fair bit of sociopolitical commentary along the way. Reeves shows remarkable restraint in keeping the running time reasonable and not allowing the action scenes to exhaust the audience, while at the same time crafting a tale that we can all relate to, no matter who we are or where we come from. Dawn of the Planet of the Apes is a sequel that surpasses its predecessor in every conceivable way, yet also manages to stand on its own as an exceptional piece of filmmaking.