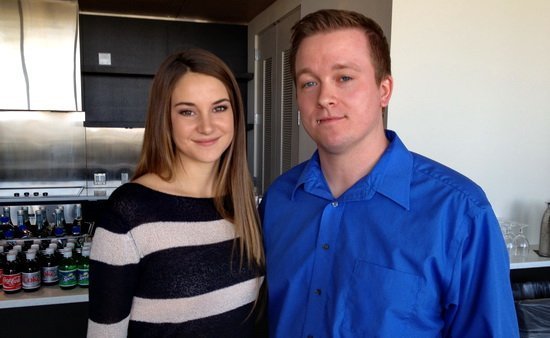 It’s a sunny afternoon in downtown Phoenix, and Shailene Woodley is flitting from table to table in the penthouse suite at the Hotel Valley Ho, warmly greeting members of the Phoenix Film Critic’s Society and engaging them in conversation. The 21-year-old actress is best known for her starring role in ABC Family’s The Secret Life of the American Teenager, but she’s making her feature film debut this week alongside George Clooney in The Descendants, the latest offering from Sideways director Alexander Payne that she describes as “an emotional rollercoaster that deals with really tragic scenarios and makes you laugh hysterically during the entire process.”

The film centers around Matt King, a father that must attempt to pull his family together after a tragic accident, which turns out to be much more complicated than he anticipated. Woodley plays the pivotal role of Matt’s feisty, rebellious older daughter Alexandra, and admits to being a little bit starstruck when meeting her co-star for the first time. “I wasn’t nervous at all until the table read,” she recalls. “He walked in the door and I started sweating, I was like `oh my God, that’s George Clooney and he’s walking towards me and trying to make eye contact.’”

But despite her initial reaction, Woodley says that she felt comfortable with her onscreen father almost immediately. “He’s so normal and so down-to-earth,” she says. “He’s such an amazing human being, and he gave me so much as an actor. He’s so professional, he’s never in his trailer, he’s always on set, and he’s available for you whether he’s on camera or off camera.”

The rift between Alexandra and Matt gave Woodley an opportunity to explore a wide range of emotions, which was one of the key factors in her interest in the role. “The reason I was so attracted to this script is because it’s so raw,” she says. “They don’t try to cover up any of the messy stuff. It’s so rare that you get a good script, because so often you get scripts that say ‘and then she burst into tears’ and you look at the words and think ‘that would never make me cry in real life.’ This script was so beautifully and truthfully written that there wasn’t a lot of acting to be done, and the emotion was naturally evoked because the words were so truthful.”

“And arguing with George was really great,” she says with a laugh. “He’s a really good arguer, so I had to be on top of my game.”

Woodley was also thrilled to work with Alexander Payne, and credits the director with her enjoyment of the experience. “Alexander is such a comfortable, happy human being. He doesn’t take himself too seriously and he doesn’t take life too seriously. Everyone was so grateful to make this beautiful piece of art, and I definitely think it was the four months that shaped my young adult life. I really tapped into who I am and who I want to be, and what I don’t want, and I’ll forever take it with me.”

After four seasons playing a rebellious teen on Secret Life, Woodley seems to be navigating some pretty familiar territory, but insists that her own adolescent experiences are not a source of inspiration for her characters. “I was about fourteen when I thought I knew everything,” she remembers. “I think every teenager goes through their angsty period, whether they want to admit it or not, but I was never the kid who snuck out at night. My parents always trusted me and I never game them reasons not to trust me.”

After making the transition from television to film, Woodley is eager to take on more projects. “I love the creativity that film brings,” she tells us. “You have so much more time to play, and bring different things and try out different colors of your character.” And with this film hitting theaters, she hopes that the portrayal of her onscreen family will strike a chord with audiences. “It deals with really dysfunctional, disconnected families,” she says. “Everyone goes through things in life and everyone has their own dysfunction, so I think there’s something for everyone to latch onto and relate to.”

The Descendants opens today in theaters nationwide. You can check out our review here.