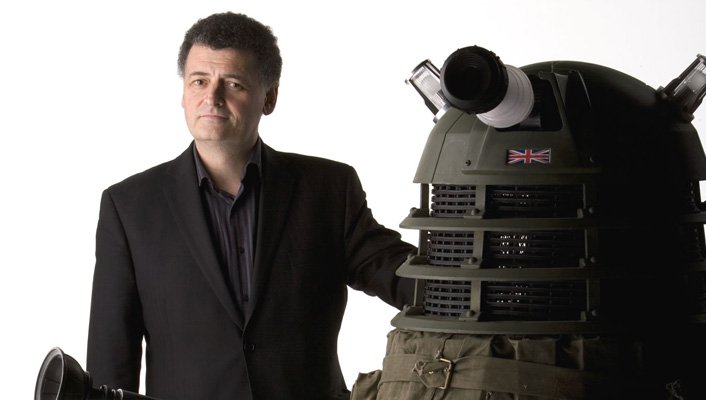 Doctor Who is back for the second half of Series 7, making its triumphant return this past weekend with The Bells of Saint John. Recently, we had an opportunity to speak with lead writer and executive producer Steven Moffat, who talked about some of his experiences working on Doctor Who, as well as what to expect from the upcoming episodes. Here are the highlights.

Can you tell us a little bit about Jenna and what she brings to the series and to the relationship with the Doctor and with Matt?

Well in a way Doctor Who is almost more in a way of the story of the companion. It’s her take on the Doctor, it’s her adventure. The companion changes more than the Doctor ever does.

So what Jenna in particular brings, she has a tremendous speed and wit and sort of an unimpressed quality that makes the Doctor dance a bit harder I suppose, he works a bit harder with Clara.

Clara is always just a little bit out of reach, secretly devoted to him but a little bit harder to impress. She’s tough, she’s fast and she’s hard to impress, exactly the way the Doctor, generally speaking, doesn’t like them but of course he’s absolutely devoted to Clara.

That’s very much driven by Jenna’s particular style, which is a very, very fast, snappy style. A very, very beautiful girl but there’s a real sense of toughness in that face of someone that, you know, who can be a real adversary if she wants to be.

Do you have a favorite episode or favorite scene from the upcoming season?

I think there are a number of highlights. I think The Bells of Saint John is a great episode. I think Cold War is a terrific traditional episode. The Ice Warriors. I think we’ve got a great finale. We’ve got some new cybermen. But you know, I change my mind all the time about which my favorite is and it’s almost invariably the next one.

You’ve created some of the most recognized and iconic monsters on Doctor Who, but in all the episodes you’ve written, which monsters were the most fun to write and why?

I’m tempted to say the Weeping Angels, because I’m standing looking at one because it’s in my back garden. I probably – the one I got the most kick out of might have been the Silence.

I loved the gimmick of the Silence – you couldn’t remember them. I just thought finding ways to employ that and finding ways to make that frightening was a very exciting thing.

I (hugely) enjoyed writing the Silence. The Weeping Angels are of course, by far the most popular adversary I’ve invented and I’m sure will always be the most popular ones I’ve invented. But they are a bugger to write because they don’t move and it’s always really hard to work out how you’re going to do a chase scene this time.

We’re looking forward to the return of the Ice Warriors in the upcoming episodes. What was your impetus for wanting to bring that particular villain back, and what were some of the challenges in reimagining that old foe?

The impetus really was Mark Gatiss. I wasn’t that keen initially on bringing the Ice Warriors back. They’ve never been any special favorite of mine in the old series. I thought they were good, but I never quite got into them, but Mark Gatiss kept nagging me about bringing them back and then he came up with an idea, which – I’m going to leave that as a surprise in Cold War, which really made them come to life for me. I think that could be brilliant.

So at that point I really got into it but that was Mark’s creativity rather than mine. The challenge, well there were a number of challenges I can’t talk about, but one I will talk about they are far, far less familiar to the general audience than say the Dalek or the Cybermen or any of those things, where you feel you have to bring the changes a bit with the look of them because, you know, they’re very familiar.

With the Ice Warriors they wanted to create a really good, super duper version of the one that’s already there. So it’s a design classic buffed up a bit for HD rather than change or revise, and that was the challenge to make.

A big conflict of your era has been the Doctor needing to not be alone. People keep telling him that he shouldn’t be alone because he’s not himself when he’s not with a companion. Why doesn’t he just always get a companion, why does he resist that?

Well, if you were told the way to heal yourself and to make yourself a better person and function better was to permanently endanger another human being, you might be hesitant too.

He is aware that he causes damage to those people, or can cause damage to those people he travels with, and he puts them in terrible danger. He’s also aware that a relationship or a friendship for him, like it or not, is postponed bereavement and it’s not even postponed that long. You know that he will outlive them, they will die and he will be roughly the same age. So I think those two factors make him very, very hesitant about taking someone on board.

And also the fact that he’s the Doctor. I mean, can you imagine trying to tell the Doctor something, trying to put him right, trying to explain something to him and have him believe you?

In the Internet prequel to The Bells of Saint John, we saw the Doctor encounter Clara as a small child. That encounter seemed similar to the Doctor’s first encounter with Amy. Was that a parallel you purposely tried to draw for longtime fans of the series?

I liked the idea because he had such an odd introduction to Clara, having met her twice and lost her twice in such exotic surroundings, you know, in the Dalek and then the governess who was also a bar maid and all that.

I sort of thought, wouldn’t it be nice if we just did something quite sweet and ordinary, and something that specifically goes back to Amy, which I’ve done twice now. It sort of keys up the fact that that relationship, whether he likes it or not, is coming back.

And there are resemblances and I suppose I’m always a bit interested – maybe too interested, I’m sure some people would say – in the fact that the Doctor’s lifespan and time traveling ways means really, when he knows somebody, he probably knows them over a huge amount of their life span and a tiny span of his.

During the course of the season, will Clara remember her other incarnations?

Well I would know the answer to that question and I certainly wouldn’t give it to you. And you will uncover the mystery of Clara in the next eight episodes, all will be made clear and you’ll get your answer that way.

New episodes of Doctor Who  will continue to air Saturday evenings on BBC America. Check your local listings for showtimes.