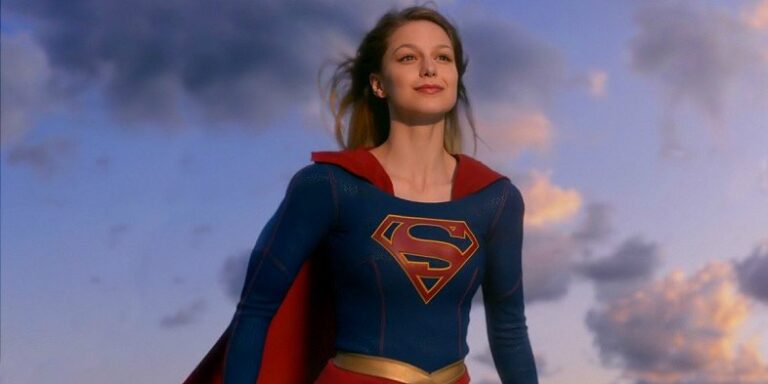 Superman’s cousin Kara Zor-El, aka Supergirl, is breaking up the boys club of lead comic book superheroes on television in a big way when the show debuts on CBS this week. Whiplash‘s Melissa Benoist stars as the optimistic Kryptonian as she struggles to balance her personal life and her newly blossoming superhero career. Oh, and you know, just trying to live up to that long shadow cast by her beloved cousin.

Over the summer, we caught up with the tremendously talented and irresistibly likable Benoist, where she gave us details on bringing the iconic character to life.

On being cast as Supergirl:

The whole feeling about being cast is just overwhelming. It is a lot of things. Obviously, I’m excited, I’m overjoyed, I feel so grateful and privileged to be taking this on. But it is a scary thing. It feels really big. And it feels like a responsibility, a good one. But I love Kara already – I think she is such a ray of light. Kara is often a character that is searching for herself in such a way that other minorities are in life and knowing her journey.

What was it like putting on the suit for the first time? Did it have a power to it?

Oh, of course! First time I put on the suit was like automatically this instant kinda chemical change. It’s part of me, and I feel like a different person every time I put it on, you know? I feel like Kara in my everyday life. I feel like this awkward, weird girl and that goes away when I put the suit on. Yeah, it’s weird! Its funny what a leotard, a cape and tights will do.

Did you have fun with all the various versions of the suit in the pilot episode?

Oh yeah, that was really fun. That one, that version, the midriff version, they wanted to do that to get that out of the way. To be like, look this is what I know some people expect from the character, but this is not what we’re doing. They did have a hair-do [like the classic comic book Supergirl]. Originally my hair was like teased and this high with the headband [gestures above her head]. I was so into it, but they ex’ed it. It would have been great.

Her quirkiness, her eccentricities. I really had a lot of fun playing that. How much of a nerd she is, you know?

On whether Melissa will get to use her singing talents as Kara on the show:

Well, there is this idea if a villain comes in and actually makes people break into song or something, because almost all of us on the show sing. I don’t know if Calista [Flockhart] does, but almost all of us do. That would be a really funny thing to explore. We’ll see.

What is a strength in Kara that you would like to have personally?

Wow, that’s a good question. There are a lot of them, but I think her perseverance. It’s easy I think, everyday to get bogged down and to feel like nothing’s giving. I just would like to have that perseverance to never give up when you are so afraid.

You’re the first woman to headline her own superhero show since Lynda Carter as Wonder Woman. How cool is that?