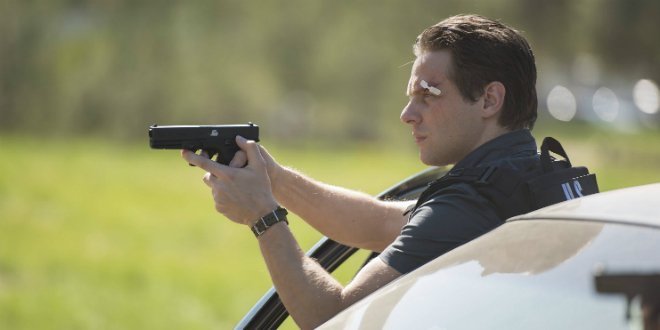 If you’re a fan of FX’s hit series Justified, then you’re probably also a fan of star Jacob Pitts, who plays Deputy US Marshal Tim Gutterson. As an expert marksman with a dry sense of humor, Pitts has been known to steal plenty of scenes right out from under series headliners Timothy Olyphant and Walton Goggins, and the actor is every bit as entertaining in real life as he is on the screen.

We’ve been fortunate enough to chat with Jacob a couple of times, including a memorable appearance on the Drinks and Discourse podcast that currently holds the record for most downloads in the show’s history. While his current shooting schedule on the final season of Justifed is keeping him busy, Jacob was still gracious enough to answer a few questions for us via email. Check it out below.

How was your real-life, honest-to-goodness Eurotrip (originally discussed in this podcast)? Any great adventures or mishaps to reveal?

A couple friends and I went to Normandy the day after the 70th anniversary of D-Day. Starting early in the morning, we took a tour of Omaha Beach, Pointe du Hoc, the American Cemetary and other highlights. By midday, the area was overrun with men and women in period uniform, jeeps and trucks from the day – there were even a couple C-47s flying overhead. People were setting up camps, running barracks, marching about. It was a trip.

At the end of our tour, I asked our guide who exactly these people were. They seemed so authoritative that all morning I had just subconsciously associated them with real military, plus I’d heard the word “volunteers” thrown about to describe them.

“So, they’re volunteers, huh? All from America?”

So, basically, we were there with a bunch of military LARPers.

With Sons of Anarchy and Justified both heading into their final seasons, have you reached out to any of those cast members to ask for advice on reaching the end of the road? Or perhaps sought advice from Walton Goggins, who’s already been through this scenario with The Shield?

I think the best advice I could get from any other actor on this show comes from just watching them work. Past that, I’m not really sure what you mean. It’s not like my mother’s died or something. How, oh how, do I transition out of this stupidly high paying job that’s not really a job and into a decent haircut for the first time in six years? Is this the scenario you mean?

Not that you’ll be able to go into much detail, but will Tim Gutterson get some more screen time in the final season? And maybe even a romance?

I’m in the first couple episodes, which is all I’ve read. Of course, it’s really good stuff. For a short while, there was even a scene where I had my Shaft moment, but that’s been dropped. Maybe they’ll use it later.  I’m not sad – what we’ve got now is even better.

As for a romance – Graham Yost and I have had so many drawn-out, hurtful arguments over whether Tim would be more of a Dawson or a Pacey that I just don’t think it’s gonna happen, unfortunately.

What are your thoughts on Sam Elliott, Garret Dillahunt and Duke Davis Roberts joining the cast for the final season? Can we look forward to you crossing paths with them?

In what possible context would Sam Elliott not be welcome? Can you think of one? Not me. And I’m thinking of some deeply personal, traumatic moments – only Sam Elliott’s there, just purring away. Or narrating. Couldn’t hurt, could it?

I was working with Garret Dillahunt just yesterday. He’s great. Duke Roberts, too. He’s so talented, I don’t think he even knows what he’s got. Hopefully someone does. Scott Grimes, as well – a total privilege. Good. Bring ’em on. More people to steal from.

I’ve heard you’ll be doing a guest spot on the next season of Elementary. Is it just a one-off, or will you be around for a few episodes?

The Elementary thing’s just a one-off. Basically, I come in and explain the internet for the older demographic. It was a good gig, everyone was good people. Jerry Levine (“Styles” from Teen Wolf) directed it, so there’s another childhood dream come true.

In grade school, I used to “wolf out” in class, begging the teacher to let me use the bathroom, where I would then go and run the sinks, throwing water in my face, “Don’t change… no – don’t change!” Just waiting for someone to bust in and demand to see my hands. No one ever did. That teacher let me make that trip numerous times, come to think of it – and I was an eight year old kid who must have clearly seemed like he was in distress. Or maybe it looked like I was just hamming it up. Either way, she let me go nearly every time. Maybe it was a Quaker thing, I dunno. She was a Quaker.

We’ve talked about Preacher being adapted into a series, and you had expressed interest in possibly playing Herr Starr (although it’s worth pointing out that Entertainment Weekly shares my opinion that you’d make a great Jesse Custer). It seems the idea of Justified cast members being involved in the series is a popular one – IGN thinks Goggins and Olyphant could both be ideal for the lead, and Zap2It envisions Goggins as Cassidy.

What’s your opinion on these – and if you could cast the series, who would you pick?

Ah, c’mon – I’d take any role in that one. “Expressed interest” – as if I’ve got anything better going on. Anyway, I think you could fill that one out pretty well with the cast of Justified. Tim and Walton’d be great in those roles, I’m sure – though I’d rather see Walton as Herr Starr, myself. Joelle Carter’d be an ideal Tulip.

The leads are some friends of mine. I don’t really follow actors enough to know who’s the thing these days, and anyway, my friends are the thing enough for me. Back when we were shooting The Pacific, Badge Dale struck me as the first person I’d ever run across who would be a good fit for Jesse. Tom Budge – also from The Pacific but mostly The Proposition – has lived his whole life completely unaware that he’s doing a Cassidy cosplay, anyway. Nicole da Silva, another Aussie, is just tough as shit. I’ve literally seen her laugh off a shark attack. While I’m being so brilliant at this, I’d also cast my friend Damien Echols as Morpheus in a Sandman series. Look him up. It’s a no-brainer.

And thanks for endorsing me as Jesse Custer, man. That’s not bad to hear.

Justified returns for its final season in January, exclusively on FX.