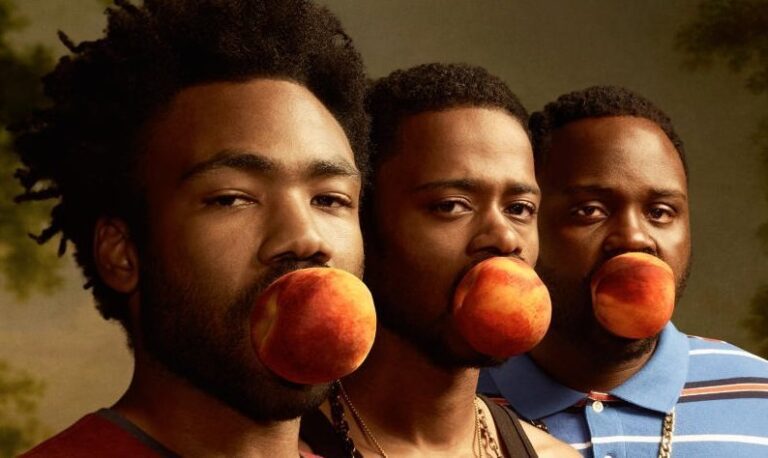 Community star Donald Glover returns to television – this time on FX – with his passion project Atlanta, that he not only stars in, but writes and produces as well. The series focuses on Earnest “Earn” Marks (Glover), a Princeton dropout trying to find himself upon returning to his hometown city of Atlanta just as his cousin Alfred “Paper Boi” Miles (Brian Tyree Henry) sees his rap career gaining momentum. Earn sees an opportunity in Alfred’s talent and convinces his cousin to let him manage his career, but the streets of Atlanta and their own personal demons could derail everything.

After viewing the first four episodes, while Atlanta is billed as a comedy, the show really centers itself around the personal drama of Earn and Alfred. Earn is next to broke and still trying to find a way to provide for his ex-girlfriend Van (Zazie Beetz) and their daughter, while Alfred is still wrapped up in his life of smoking weed and selling drugs to finance his studio time to record demos. Many of the most truly comedic moments come from Alfred’s seemingly aloof sidekick Darius (Keith Stanfield), but consistently astounds with hilarious moments of insight and lucidity that surprise everyone – including the viewers.

Donald Glover pulls heavy-duty by starring, producing and writing quite a few of the episodes, and makes it quite clear that his history with Atlanta has highly influenced how he wants this story told. The three stars also have very clear chemistry that displays a familiarity that feels akin to watching a reality documentary. Glover writes these characters’ voices with an ease and understanding that feels sincere right from start with the shocking cold open of the first episode.

Director Hiro Murai, a Tokyo-born filmmaker known mostly for music videos, reconnected with Donald Glover after previously working with Glover’s musical persona Childish Gambino, and helms all of the early episodes of Atlanta. Murai handles this series with impressive fortitude, from the aforementioned cold open to the awkward, small social interactions that produce some great moments of ironic humor. Atlanta is smart television without throwing it in your face, and each viewer will most likely take something different away from the series.

The first four episodes dig into many interesting and poignant societal issues from the current definition of family, to social media exploitation and even the current state of the music industry. Atlanta is a love letter to its people, while also skewering some of the more absurd aspects of that culture through the eyes of these three very nuanced characters – each trying to look out for each other, while getting out of their current lives. If Glover’s departure from Community and his recent low profile as a working actor are what was needed to bring us Atlanta, television viewers are all the better for it.

Atlanta debuts on September 6, and will continue to air Tuesday nights exclusively on FX.

This intelligent and poignant approach to the more absurd aspects of Atlanta culture is more drama than comedy, but takes on current definitions of family, social media exploitation and even the current state of the music industry through excellent direction from Hiro Murai and Glover's talented acting/storytelling skills.