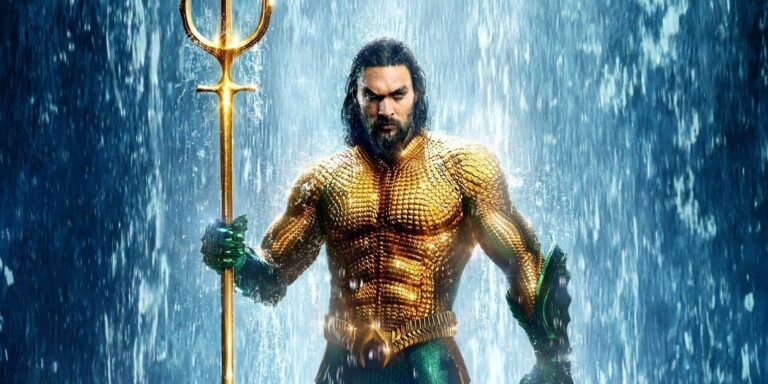 DC Comics hero Aquaman has long been the butt of numerous pop culture jokes for being seen as the weak link in the Justice League. When bringing the character to the big screen, Warner Bros. made sure their live action version could never be mistaken for weak as they cast Game of Thrones alum Jason Momoa in the role for a cameo in Batman v Superman: Dawn of Justice and his full-blown debut in Justice League. Now the King of the Seven Seas is getting his own solo adventure and it looks like following the success of Wonder Woman, DC Comics films are officially back on track and also a whole lot of fun.

Director James Wan’s vision for Aquaman is colorfully bombastic, but at times uneven with more than a few tonal issues, but there’s just something infectious about the film that makes it easy to look past these shortcomings. Momoa’s big lug of a superhero and the feeling that Wan is obviously having a blast paying homage to numerous beloved blockbuster films that have shaped his career carry the weight of the epic scale of the film.

Everything pops in Aquaman as the film expands its visuals from the first time audiences see the gorgeous weapons and outfits of Atlantean soldiers to the first ride through Atlantis and ending on the bonkers climactic battle. The plot is fairly thin and full of expositional jargon, even by comic book film standards, but the movie sure has fun getting from point A to B.

The ensemble cast is very enjoyable, but also a bit uneven in quality. Nicole Kidman shines as Atlanna, Arthur Curry’s mother, as she pulls off a warm loving side, while also kicking some serious ass and will survive by any means. Amber Heard is Arthur’s love interest Mera and also provides some badass action, but Heard never quite settles into the role.

On the other side of the battle, the villains are led by Patrick Wilson as the unexpected scene stealer of the film with his wonderfully over-the-top performance as Arthur’s half-brother Orm aka Ocean Master – whom is perfectly recreated for the live action film. Comic nerds also rejoiced at the picture perfect adaptation of arch enemy Black Manta’s tech-suit, but actor Yahya Abdul-Mateen II is given a hilariously bad C-plot backstory and is easily one of least complex super villains of recent films – the good news is his fight sequences are pretty darn cool.

To say that Aquaman as an overall film is rough around the edges, would be underselling it. Despite being visually stunning for the majority of its runtime, some CG is embarrassingly sub par. Additionally, the inclusion of popular music like Pitbull’s atrocious cover of “Africa” will induce groans in theaters nationwide. Lastly, as fun as Momoa is in the role, he crosses the line from cool to campy more than once giving Aquaman an occasionally weird and corny vibe.

But James Wan’s film is still an explosion of cinematic caffeine buzz with the director holding nothing back and letting his imagination run wild. Despite its many flaws, Aquaman is just crazy enough to work and sets up an amazingly lush aquatic world with many realms to explore in the hopefully numerous sequels.