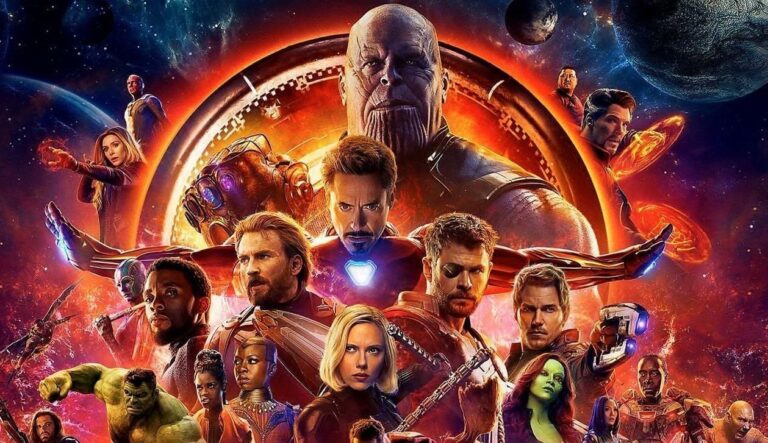 Everything has led up to this moment. Ten years of Marvel Studios films and a brief sneering cameo by the Mad Titan Thanos at the end of Avengers have built to what is to become the end of the first era of the Marvel Cinematic Universe, with Avengers: Infinity War. This well-oiled machine that is the MCU has surprised yet again and delivered a wonderfully entertaining, risky, and elaborate popcorn adventure that will have fans buzzing as they exit the theater.

What Avengers: Infinity War exceeds at from the very first scene is jumping right into its massive story with zero hand-holding for anyone that isn’t caught up on the MCU films up to this point. Events kick off right from the end of Thor: Ragnarok as the film slowly rolls out the cast in some impressively paced introductions, especially when you consider the size of the cast and story. This allows the film to use crucial exposition time to build up the villainous character of Thanos (Josh Brolin), whom we’ve scarcely seen onscreen before, and the time with him is extremely well spent.

Marvel Studios films have taken a fair amount of criticism for their lack of solid villains and Avengers: Infinity War lives or dies on whether this unprecedentedly long buildup towards Thanos as the Big Bad of the MCU pays off – and thankfully it does, in many expected and even unexpected ways. Brolin’s motion-capture portrayal of the always calm and collected Thanos is masterful, vividly bringing to life the insanely powerful Titan’s motivations that begin to become more clear giving a rich, nuanced adversary for the heroes. Whether in a quiet scene with his adopted daughter Gamora (Zoe Saldana) or brutally bashing beloved characters to pulp, Thanos begins to take shape as the most layered and well-executed villain any Avenger has faced onscreen.

Also impressive is the way screen time is balanced out among the massive roster of heroes and villains. The film makes some terrific pairing choices with characters audiences didn’t know they needed together until you actually see them interact. Tony Stark (Robert Downy Jr.) and Doctor Strange (Benedict Cumberbatch) are two sides of the same coin and watching that friction is a blast, while seeing Thor (Chris Hemsworth) travel the cosmos with the Guardians (and more importantly Rocket, voiced once again by Bradley Cooper) is full of so much great comedy and character moments audiences will be begging for more. Tom Holland even manages to steal almost every scene as Spider-Man, even when surrounded by the biggest heroes (and actors) in the business.

Avengers: Infinity War doesn’t skimp on the funny either. Heroes fall, there are huge moments of change, but the constant in the script by Christopher Markus and Stephen McFeely are well-earned laughs that are almost always beautifully timed and well-executed. Audiences are so endeared to every franchise’s characters that the script really digs deep into the humor, much in the same way that Thor: Ragnarok really opened the playbook on finding the humor in these larger than life characters.

The other element of the film that really surprised me, and had me contemplating the film long after the end credits stinger (yes, there is one), were the huge risks the filmmakers took with the storytelling, leading up to a very ballsy cliffhanger/resolution. Critics can argue all they like that MCU has a formula that works and just milks it, but Avengers: Infinity War will go some places that fans haven’t even theorized could happen. It’s a testament to just how impressive and historical Marvel’s accomplishments have been up to this point, and especially including this film.

There isn’t a whole lot of negative to dwell on here and sure, there will be things to nitpick here and there. Certain fans might possibly feel like their favorite character got short-changed on screen time (Chris Evans as Cap could’ve used a bigger arc) or the two and half hour-long running time is too much, but it’s hard to poke holes in this behemoth of a popcorn superhero film. The emotions are high, everything has weight, and the action and laughs are nonstop, making the worst thing about the film the year-long wait until the unnamed sequel.

10 years of backstory and buildup converge into a bombastic, fast-moving, epic adventure that has just as much humor as heart, made all the more complex by its fascinating villain and ballsy story turns.