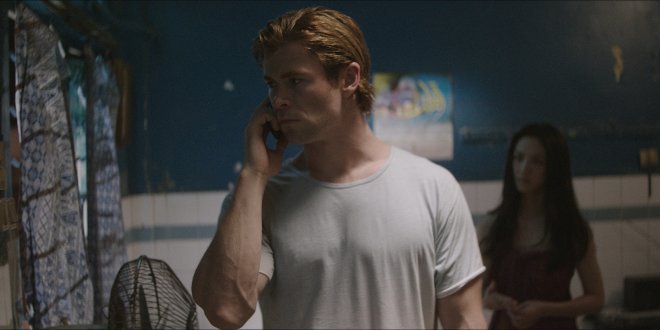 Sometimes, watching a bad film – and in my case, subsequently writing a review of a bad film – can be an enjoyable experience. There are some films that are so painfully awful that they actually become somewhat fascinating, and there’s a part of you that wants tell others about them, mostly so you can sit around afterward saying things like “do you remember that part when…” and sharing a laugh.

And then there are films like Blackhat, which is so appallingly atrocious that it borders on being offensive. While it probably isn’t fair to believe that every film from Michael Mann to be as engaging as Heat or as exciting as Collateral, audiences should still be able to expect a certain level of competence from the veteran director. In this case, those competencies aren’t just missing – it’s almost as if they never existed. If it weren’t for a handful of signature shots, I would never have believed that Mann had anything to with this mess of a film.

Chris Hemsworth, best known for his role as Thor in the Marvel films, is laughably miscast as Nicholas Hathaway, an MIT graduate currently serving a 15-year sentence for hacking into a series of banks. After a disaster in a Chinese power plant is traced back to a malicious piece of code, Hathaway gets furloughed in order to help a no-nonsense FBI agent (Viola Davis) and his former roommate, now a Chinese government official (Wang Leehom), track down the culprit – because of course, Hathaway just happens to have a special connection to the code.

And speaking of special connections, there’s also his old pal’s sister (Tang Wei), who gets a few looks at Hathaway and his constantly unbuttoned shirt and falls right into bed with him. There’s a throwaway line about her being some sort of network engineer, but she exists solely as a plot device, an effort to shoehorn a preposterous romance into a film that is already full of things that make absolutely no sense. For starters, if Hathaway has been in prison for most of his adult life, when did he find time to become an expert marksman with a handgun, or a master of hand-to-hand combat?

This is just one of many, many questions that Blackhat raises, without offering a single satisfactory answer. Michael Mann goes to great lengths to extend the film’s already overbearing running time by subscribing to the “style over substance” theory. Take, for example, the film’s opening sequence, which finds the camera doing a microscopic zoom into phone lines and over motherboards, showing us what it believes are the inner workings of technology as data is being transmitted. It’s an arrogant, ham-fisted attempt to create excitement where none exists, and the truth is, we don’t care about seeing the data travel from Point A to Point B – we just want to know what happens when it gets there.

Rarely have I found myself so overwhelmingly frustrated with a film, and I honestly can’t remember the last time I sat in a theater checking my watch as often as I did during Blackhat. This is the first theatrical release I’ve seen since before the start of the new year, and I almost feel ashamed by the fact that I wasted the title of “first movie of 2015” on this garbage. Unlike the aforementioned so-bad-they’re-good films, there is nothing redeemable, interesting, or enjoyable about Blackhat. Don’t make the same mistake I did.