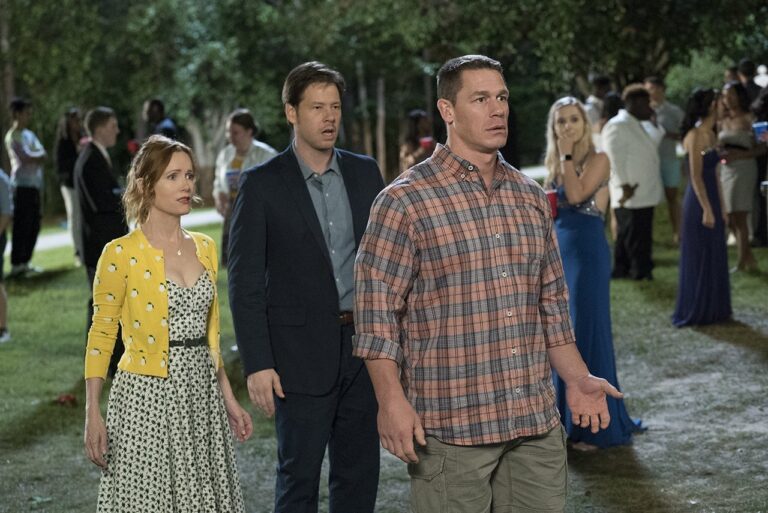 On its face, the premise of Blockers is troubling: upon discovering their teenage daughters have entered into a pact to lose their virginity on prom night, a trio of parents set out to sabotage their efforts (the title, which features a prominent silhouette of a rooster, is a marketing-friendly version of the term “cockblockers”). Luckily, in the hands of first-time director Kay Cannon, the finished product is significantly more intelligent and hilarious than its setup might suggest.

Single mom Lisa (Leslie Mann) has a great relationship with her daughter Julie (Kathryn Newton), the kind of bond which finds them embarking on morning runs together and mixing protein shakes in tandem. But Lisa is a bit on the overbearing side, which prompts Julie to clandestinely apply to several out-of-state colleges in order to establish some distance – and Julie certainly isn’t comfortable revealing her desire to close out prom night with the sort of magical first-time sexual encounter that only seems to happen in movies (that Julie draws inspiration from “the romantic comedy American Beauty” signals how elaborate – and potentially misguided – her expectations are).

When sports star Kayla (Geraldine Viswanathan) learns of her friend’s plan, she decides that she wants in on the action, but Sam (Gideon Adlon) is less than enthused about throw her hat into the ring. “What if he has a weird-looking one?” she frets, which prompts Kayla to point out that male genitalia rarely makes for attractive eye candy. “Penises are not for looking at,” she advises. “They’re for use – like plungers.” Unbeknownst to the other girls, however, is that Sam is questioning her own sexuality – although staring longingly at Lord of the Rings cosplayer Angelica (Ramona Young) and Photoshopping herself into photos with Xena the Warrior Princess should remove most of the “question” from that equation.

Countless films have been made about teenage boys trying to get laid, with Superbad and the American Pie series among the most prominent, but it’s rare for Hollywood to explore the other side of the coin – which makes Blockers feel all the more refreshing and empowering. The film goes to great lengths to repeatedly point out the absurdity of the sexist notion that young women aren’t capable of making decisions about their bodies and their sexuality, or that parents have a duty to “protect” their daughters from “making mistakes.” Cannon also revels in putting the trio of adults through a series of increasingly cartoonish trials, such as a scene where Kayla’s dad (John Cena) agrees to a butt-chugging contest in order to prove that he’s not a cop trying to bust up the party.

The adults pull their weight, with Cena in particular showcasing a strong aptitude for comedy (a skill that was previously best glimpsed in Trainwreck), but the film truly belongs to the girls, with Viswanathan emerging as the standout. As the night progresses and her character samples all manner of drugs and alcohol in order to steel her resolve for the big moment, Viswanathan consistently delivers some of the film’s punchiest lines. Meanwhile, Adlon – the daughter of Better Things creator Pamela Adlon – shares her mother’s gift for wry humor while expertly navigating some of the film’s most emotional material.

As should be expected with any teen sex comedy, Blockers contains a few gross-out gags (note to studios: vomit is almost never funny) and a constant barrage of raunchy dialogue, but there’s a surprising amount of heart beneath the film’s decidedly R-rated surface. Things wrap up a little too neatly when the parents’ scheme is ultimately revealed, and it feels like a missed opportunity to further the commentary on the double standard applied to teenage boy sexuality when compared to girls, but Cannon’s film is ultimately focused on laughs – of which there are plenty.

Regressive premise aside, Kay Cannon's directorial debut is actually a sex-positive film with a strong feminist perspective, layered with raunchy laughs and the requisite gross-out gags.