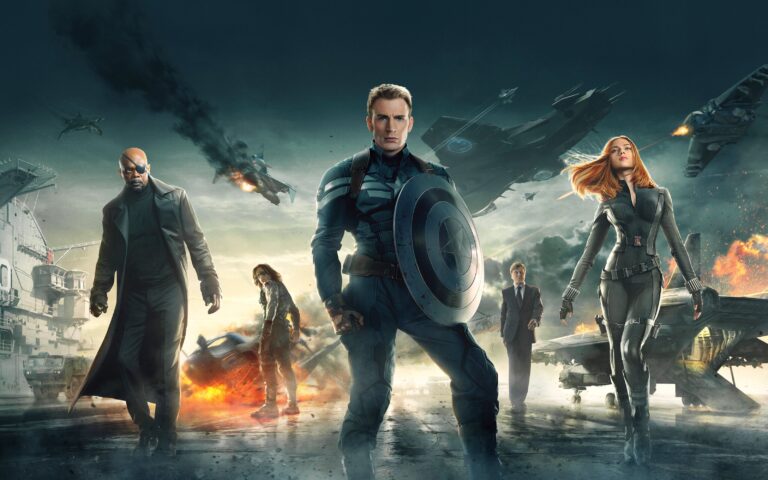 Captain America: The Winter Soldier is a film that I’ve had circled on my calendar for quite some time. I adored the footage shown at Comic-Con 2013, and if you got to see my hand-made Halloween costume from a few years ago, my affinity for the character becomes obvious (not to mention that Captain America: The First Avenger was the first film I reviewed for this site).

But the idea of a sequel to the first film always worried me. How well could a non-period piece Cap film actually translate to a sophisticated, modern movie going audience? Pretty damn well as it turns out, because Marvel has something special on their hands with Captain America: The Winter Soldier.

The sequel is a Marvel film for people who don’t really like Marvel films. This is a very mature, very grounded tale (for a superhero film) and unexpectedly digs deeper into many real modern issues (something these films tend to stray away from). This is not the America that Steve Rogers fought for in WWII and the longer he spends in our time, the more he starts to see it. Today’s growing fear of the government peering into our lives and invading our privacy rights in the name of “freedom” is placed front and center, and the ramifications are not only scary for our characters, but for the audience itself when we consider how close to home these issues are hitting.

Chris Evans is so effortless in his portrayal of Steve Rogers, especially now that he’s got two prior films under his belt going into this, that I can only compare it to Christopher Reeve as Superman. I just can’t see anybody ever nailing the subtleties of the role the way Evans does, and these are absolutely a necessity for the character to come across as one that inspires you rather than to roll your eyes at.

We find Rogers has gotten over the shock of his time jump and is starting to dig in and grasp the world around him. What seems most tragic is that when we meet him at the beginning of the film, he truly seems ready to move on. But the events of the movie and the appearance of The Winter Soldier (including his connection to Rogers’ past) rock Cap and shatter any comfort he was taking from his new life working for S.H.I.E.L.D.

And boy is the world ever shattered. Not just Cap’s world, but the entire Marvel Cinematic Universe, and especially S.H.I.E.L.D. The sheer boldness of the film’s secrets and their impact are the stuff normally reserved for comic books, and seem like only the tip of the iceberg of what Marvel can accomplish now that they have their confident swagger in an established universe.

The MCU has never felt bigger or more cohesive than watching Agents of S.H.I.E.L.D. on television the week before the film’s premiere, seeing the seeds planted for these events and how they directly tie into this film. I’m honestly at a loss at how that show can continue after what is revealed in Captain America: The Winter Soldier, but I can’t wait to find out. Needless to say, it makes you want to go back and revisit certain events in previous movies, and makes even a few frivolous characters seem a bit more important.

While Joe Johnston was the perfect choice to direct the first film, Community’s Anthony and Joe Russo really took the ball and ran with it while modernizing the look and vibe of the franchise into an almost entirely different genre. Captain America: The First Avenger is akin to The Rocketeer in the same way Captain America: The Winter Soldier is to the Bourne franchise. The film’s colors are muted with colder tones and the fights are gritty, visceral and punishing in the numerous hand-to-hand combat scenes. But the Brothers Russo get the heart and the humor of Captain just as well as Whedon and Johnston did in their films, which is important to get right right so that everything still feels connected.

The supporting cast is also tremendous and is most importantly anchored by a very surprising appearance by Robert Redford in a rare, big budget spectacle film role. I’ve long thought a young Redford would’ve made the quintessential Steve Rogers back in the day, so it certainly seems I wasn’t alone when Marvel pursued him for the role of S.H.I.E.L.D. senior leader Alexander Pierce. His character is much larger than I expected and is absolutely integral to the main plot, and Redford may even just be having a little fun.

Scarlett Johansson returns as Black Widow, and for the first time is actually given some well rounded material to work with that results in her finally being a more fully realized character, rather than badass eye candy. Her interactions with, and possible affection toward Cap really give them a great relationship to play with in this story’s conspiracy.

In addition, Anthony Mackie had the most to prove in his debut as Falcon, and I can honestly say that I hope he is at Cap’s side in every appearance from here on out. Mackie delivers some really terribly written lines and makes them work with ease, creating Sam Wilson/The Falcon as the buddy every superhero needs and can rely on when the chips are down.

But what about The Winter Soldier? I mean, he’s in the title of freakin’ film, right? All I can say is that he is an absolute force in this movie. He’s the shark in JAWS. After his first appearance, his presence looms over every scene and whenever he reappears, things get brutal very quickly. My only complaint is that Sebastian Stan as The Winter Soldier isn’t given much more to do other than the physical side of things (and glaring at Cap) for reasons you’ll discover over the course of the film.

Captain America: The Winter Soldier follows in Thor: The Dark World’s footsteps, by being a Phase Two film that actually outdoes the original. The sequel doesn’t suffer the same problems during the third act, and has very few of the sillier moments that hampered the tone of the WWII period of the original. But the biggest badge of honor that I can give the film is saying that it is easily Marvel’s best film since the original Iron Man (and some may even prefer this film to that one). Captain America: The Winter Soldier feels the most fresh of all the sequels and is the strongest proof yet that the MCU can continue to experiment, evolve and expand.