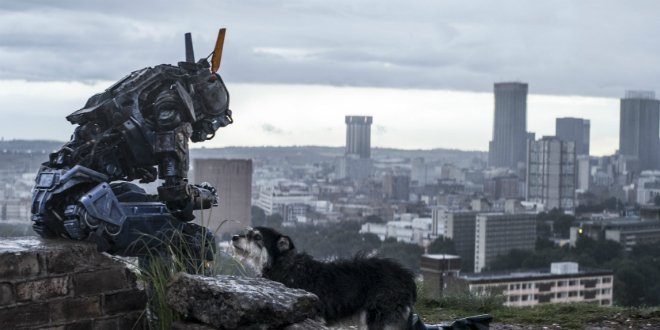 Six years ago, South African director Neill Blomkamp burst onto the scene with District 9, a captivating sci-fi tale featuring a breakout performance from Sharlto Copley, and heralding the arrival of a bold new cinematic vision. Blomkamp’s unique style landed him a job on the ill-fated adaptation of Microsoft’s Halo videogame franchise, and even though the project fell apart, the additional exposure allowed him to secure financing for Elysium, an ambitious endeavor with a $115 million budget that didn’t exactly set the box office on fire.

Now, Blomkamp is back with an equally ambitious follow-up, and although the production budget for Chappie hasn’t been disclosed, it likely clocks in well below his previous effort. Chappie imagines a near future where the crime-ridden city of Johannesburg has implemented the world’s first robotic police force, in an effort to take back the city from the gangsters and warlords that have reigned supreme for so many years.

The robots were created by Deon Wilson (Dev Patel), a brilliant young engineer at a weapons manufacturing company that is raking in huge profits thanks to the South African government’s interest in its titanium protectors. Deon wants to improve the machines, and he’s on the verge of creating a fully functional AI, but his boss (Sigourney Weaver, who could’ve used more screen time) isn’t interested in “smart” robots. Neither is Vincent (Hugh Jackman), a former soldier whose bloated, expensive war machine, “The Moose,” was deemed too expensive and impractical, and who harbors resentment toward Deon and his mechanical offspring.

Determined to see his experiment through to completion, Deon absconds with a damaged robot marked for destruction, but finds himself hijacked by a pair of street thugs (Ninja and Yolandi Visser from South African rap group Die Antwoord). The duo wants Deon to shut down the existing police robots so they can pull of a heist – not exactly an easy task – but they’ll settle for taking possession of the machine that Deon salvaged for his new AI program, a childlike creation that calls itself Chappie.

Motion-captured and voiced by Blomkamp mainstay Sharlto Copley, Chappie is a delightfully endearing marvel of cinematic magic. The CG animators have done some truly remarkable work here, crafting an incredibly detailed creation that is more expressive and engaging than most of its human counterparts. The film’s best moments are derived from Chappie’s sense of wonder as he interacts with other characters and tries to absorb the vastness of the world around him.

Unfortunately, those moments often get lost in the surrounding chaos, as the film struggles to maintain a consistent tone. There are some interesting questions here about the nature of humanity and what it means to be truly alive, but Blompkamp seems more interested in devoting entirely too much screen time to Die Antwoord than providing answers to those questions. Ninja and Yolandi are certainly an interesting pair, but it doesn’t take long before the novelty wears off and their antics grow tiresome.

It also doesn’t help that the film’s third act goes completely off the rails, as Jackman’s character morphs from a somewhat likeable goof with a bit of wounded pride, to a full-on cackling madman, bent on violence and vengeance (and that’s not an exaggeration, he actually cackles). Chappie‘s ultra-violent finale feels like it belongs in a completely different movie – maybe Robocop, a film whose DNA permeates the landscape here, and manages to be far more cohesive than this one.

Chappie features a handful of great ideas, and a truly marvelous performance by Copley, but it’s all squandered on a film that has no idea what it wants to say, or even what it wants to be. There are enough pieces here to assemble a great experience, but it never really comes together into a satisfying whole. Once again, Blomkamp has failed to live up to the promise and potential he showed in District 9, and that’s a shame.

A handful of great ideas squandered on a film that has no idea what it wants to say, or even what it wants to be. There are enough pieces here to assemble a great experience, but it never really comes together into a satisfying whole.