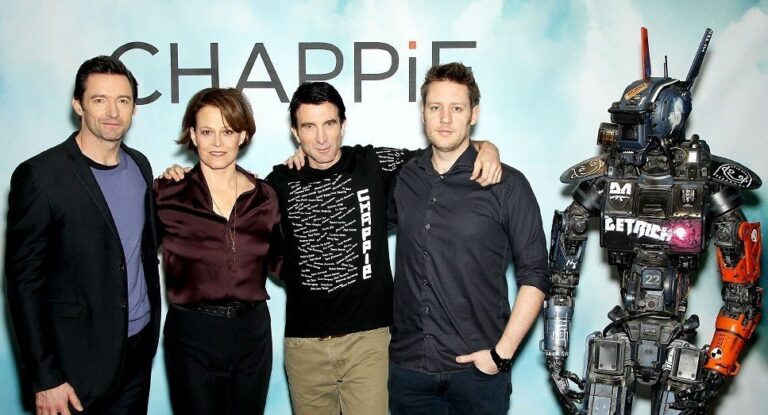 Early in the month of February, I was invited by Sony Pictures to fly out to a frigid, post-snowstorm New York City to take part in the press junket and attend an advance screening of Chappie, the new film from sci-fi visionary writer/director Neill Blomkamp. While I can’t tell you about the film yet due to embargo, Nerd Rep can bring some of the insight that Blomkamp and three of the film’s stars – Hugh Jackman, Sharlto Copley, and Sigourney Weaver – gave us during our coverage of the junket.

Since the film is not released the article below will remain spoiler free, but be sure to check back this Friday on the film’s release date for a more in-depth look at Chappie that will include some minor spoilers from the film. But you’ll be safe reading some of our spoiler free highlights below until you’ve all had a chance to see it.

Chappie director Neill Blomkamp on his view of artificial intelligence and whether he sees the film as something that could actually happen:

“My point of view, actually, on artificial intelligence, which ties into the nature for humans constantly looking into the reasons for why we exist and why consciousness exists, changed during the making of Chappie. I’m not actually completely sure that humans are going to be capable of giving birth to A.I. in the way that films fictionalize it.

So you have weak artificial intelligence, which is a robot or a computer system that follows a list of protocols and it’s like “yes,” “no” answers that can be as complex as you want and then you have strong A.I., which is basically like a human. Something that can think up a thought that’s never been thought of, or paint a painting, or write a poem.

So in the realm of strong A.I. or human consciousness, I think that it’s been something that troubles humans or forces us to look at it over and over for a millenia or as long as we’ve really been conscious, because there is no answer. There is no explanation, even for 1% to grip on to and hold on to.

So we just don’t know why we’re here. We don’t know how consciousness is created and we don’t know the nature of consciousness – whether it becomes a spiritual and philosophical discussion or whether it’s simply running electrical currents through synapses and it leads to consciousness. I think it isn’t that, by the way. So it’s probably the most core fundamental question that humans can ask and I think that’s reason we constantly keep asking it.”

Hugh Jackman on the mullet his villainous character Vincent Moore sports in the film:

“One of the images that was first sent to me was of an Australian character who had a mullet, that Neill sent to me, and it included the shorts and the mullet and I just loved it. I had forgotten, though my wife reminded me, that the very first job that I did I had a mullet when she met me.

So it was kind of great for me. It’s a nice throwback to 20 years ago. It just seemed to fit who he is. He’s one of those guys that thinks he’s the coolest. He thinks that everyone at the office likes him. He thinks that he’s got it all together and he doesn’t realize, from the haircut to the shorts to the way he acts, that nobody really likes him. He really thinks he’s the man and the mullet seemed perfect.”

Sharlto Copley on his motion capture performance and bringing Chappie himself to life:

“It was a fun experience, really, to get to play a kid, most of the time. We used a process that is really, I think going to become more and more prevalent in Hollywood, like a performance capture process where I wore a gray suit and was able to engage with everybody on the set, just as you normally would – just act the robot.

Then an incredibly skilled team of animators – I’ve actually got this shirt made that has their names, just as a way of trying to, you know I come from Visual FX, and I think these guys are the real unsung heroes of our business. This actually has a back too, which I believe is over 200 people that were involved in putting Chappie on top of me and having to try and, with the very limited face that Chappie has, convey the emotion that obviously I got to use my whole face, the animators only got certain tools: ears and little things they could do with the eyes.

But it was an amazing, almost magical, experience you feel like together, me and these 200 hundred people kind of gave birth to some totally new creative being. In a small way, it was like creating A.I. and as an actor you sort of made some new being.”

“I must say, I think every science-fiction film that I’ve done, they’re pretty distinctive in terms of their world, and what I love about Neill’s films – all three of them that I’ve seen – you know sometimes people think of sci-fi as “film light” and Neill’s films always have such an underpinning of something that’s actually very important for us all to discuss and think about.

So we had a riotous good time making the movie. It was so happy and it was so exciting for me to work in South Africa with such an international crew, to work with Hugh and Sharlto and Neil.

But I also felt the movie had so much to say about us in terms of “What is it to be human?” and in a sense that word ‘human’ is a hard word to define now because there are so many inhumane acts in the film perpetrated by humans and not perpetrated by robots.

So I just love how he has this cauldron going of all these very important issues underneath a very entertaining movie.”

Chappie will hit theaters on Friday, March 6th. Be sure to check back then for our more in-depth coverage of the press junket, that will include minor spoilers from the film.