Movie Review: ‘Fantastic Beasts and Where to Find Them’ 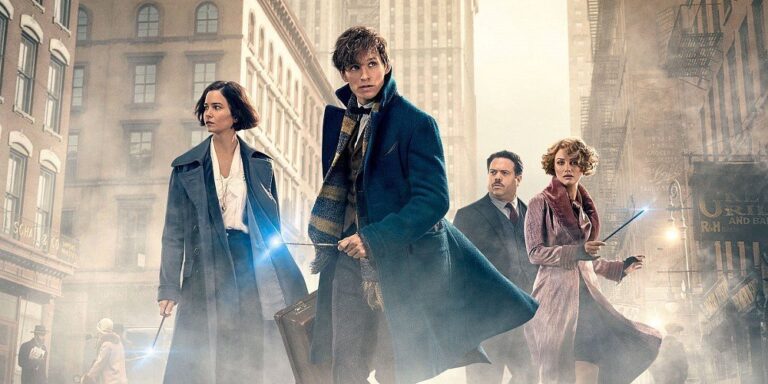 The wizarding world of Harry Potter is back and getting a lot bigger with the long-anticipated release of Fantastic Beasts and Where to Find Them. Oscar winner Eddie Redmayne (The Theory of Everything) takes over the lead actor reigns as Newt Scamander, author of the famous Hogwarts textbook, to kickoff a new series of films with this entertaining tale that falls short of greatness, but is still highly imaginative and shows much promise for further installments.

When adventurer and lover of all magical creatures Newt Scamander arrives in New York City in 1926 with a personal mission and a suitcase full of fantastic creatures, he finds himself embroiled in an ongoing battle to keep the wizarding world from being exposed to the muggles – or “No-Majs” as they’re called in the United States – all while concurrently a mysterious dark wizard figure begins to rise.

As a film, Fantastic Beasts at its best when dealing with the lighter sides of wonder and beauty of the wizarding world. The movie has a pure heart and it is never better on display than in the scenes where Newt and his newly acquired No-Maj sidekick Jacob Kowalski (Dan Fogler) are searching 1920s New York for a handful of instantly lovable creatures that have escaped his magical suitcase.

The film mixes the old and new in impressive fashion with elements like the goosebump-inducing Warner Bros. logo opening with the John Williams theme cue that then cuts to the harbors of New York – a previously unseen location as the original films never journeyed to the US. As Newt introduces the viewers to the world, it is quite spectacular to focus on adult wizards and witches leading their regular lives. From casually apparating, to repairing buildings with a small gesture, the film displays just how interesting and powerful these individuals are when compared to the children that took main focus in the previous Harry Potter franchise.

Newt’s tangles with the MACUSA (Magical Congress of the United States of America) and their employee and ex-Auror Porpentina “Tina” Goldstein (Katherine Waterston) is the lovely relationship at the center of it all, and wonderfully portrayed by Redmayne and Waterston in a understated way that doesn’t detract from the story. Tina’s sister Queenie Goldstein (Alison Sudol) also brought a fun dynamic to our crew of heroes with her skills in Legilimency (mind reading) being both terrifying and humorous as displayed by her overall sweet nature.

But David Yates, director of the final Harry Potter films, returns to helm this one and brings his overly grim visuals that often overwhelm the lighter moments of the film. In the previous Harry Potter installments, they each earned the darkness that permeated the later films in the series, but in Fantastic Beasts it feel gritty and dark for the sake of being gritty and dark – which has been a common problem with Warner Bros. films as of late.

One of the main plots of the film revolves around a family of “New Salem” followers that are trying to revive the Salem Witch Trials with hate and persecution of the closeted magic community. Future The Flash Ezra Miller plays adopted child Credence Barebone in this family and is physically and mentally abused by his mother in some very dark sequences. The film doesn’t get overly visual with the abuse, but the sequences are definitely disturbing for adults and especially children.

Colin Farrell’s Percival Graves, a high ranking Auror in the MACUSA, is using Creedence to track down a child within the family that he’s previously glimpsed in a vision and potentially is very powerful. Graves’ motivations are murky and confusing for the early parts of the film and Farrell seems a tad wasted in the role – especially when Graves’ mysterious past is finally revealed in the second half of the film.

Rowling’s stories have always had these types of themes of discrimination and abuse, and Fantastic Beasts is also her first screenplay, but the darkness felt heavy-handed and unnecessary throughout. Fantastic Beasts would have been better suited with more tilt toward an adventure film with a growing threat rather than feeling like a story in the midst of a full-blown war.

Whether racing through (and destroying) the streets of 1920’s New York or introducing audiences to numerous incredibly cool new creatures inside Newt’s very TARDIS-like, bigger-on-the-inside suitcase, Fantastic Beasts and Where to Find Them is full of tremendous visuals and likable new characters in a new corner of the Harry Potter universe – unfortunately some of the family charm is dulled by an overall dour vibe and unnecessarily dark plot lines.

While much darker in content and tone than necessary, this uneven but entertaining return to the wizarding world of Harry Potter is still full of imagination, spectacular creatures, dazzling effects, and a decent amount of heart - solidifying the staying power of this new spinoff franchise of J.K. Rowling's universe.