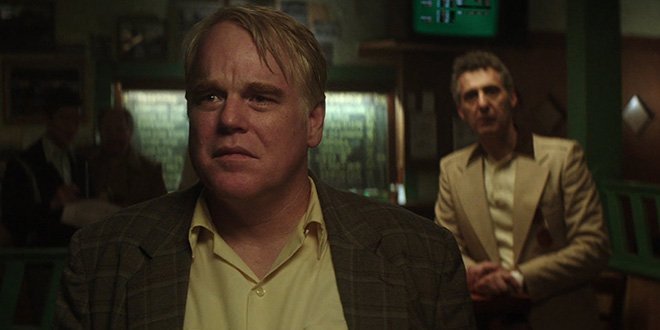 It’s 1978, and in a little working-class neighborhood on the south side of Philadelphia, Mickey Scarpato (Philip Seymour Hoffman) scrapes together a living as a small-time criminal alongside his best pal, Bird (John Turturro). Mickey’s always been something of an outcast in God’s Pocket – unlike most of its residents, he wasn’t born and raised here – but his devotion to wife Jeanie (Christina Hendricks) and his ties to organized crime have at least garnered him a bit of respect.

When Jeanie’s son Leon (Caleb Landry Jones) turns up dead on a construction site, the police tell her it was an accident, but she doesn’t buy it. Eager to please, Mickey agrees to make inquiries into the circumstances of the boy’s demise, and also arrange for the funeral services – sadly, he’s woefully incapable of performing either of these duties without leading to some sort of calamity. Meanwhile, a well-known newspaper columnist (Richard Jenkins) is also investigating the death, but his first meeting with Jeanie leaves him far more concerned with getting under her skirt, rather than to the bottom of the mystery.

First-time director John Slattery (Mad Men) coaxes brilliant performances from the immensely talented cast he’s assembled, with Hoffman’s portrayal of a man broken and beaten down by life serving as a haunting reminder of the tragedy that would occur shortly after the film’s Sundance debut. Hendricks is the lone weak point in an otherwise flawless cast, with her character’s motivations for succumbing to the advances of an aging, alcoholic newspaperman straining the limits of credibility.

Much like the neighborhood where the film takes place, God’s Pocket is populated with an assortment of interesting, colorful characters that we’re anxious to learn more about. It’s a shame, then, that none of these characters are ever fully developed. Slattery’s debut plays more like a collection of scenes rather than a completed work, leaving the audience to only ponder what lies beneath the surface.