Movie Review: ‘Guardians of the Galaxy’ 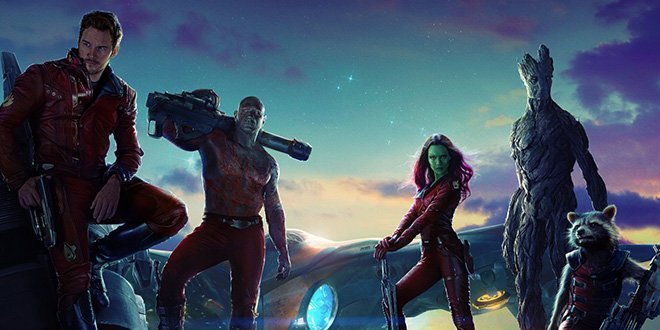 I remember sitting in Hall H at Comic-Con two years ago, when Marvel first announced Guardians of the Galaxy. This came on the heels of the title reveals for Captain America: The Winter Soldier and Thor: The Dark World, and my initial reaction was one of utter confusion. What the hell was Guardians of the Galaxy? I was completely unfamiliar with the source material, and upon learning that the team featured a gun-wielding raccoon and a fighting tree creature whose could only speak a single phrase, I was even more puzzled.

Fast forward to Comic-Con 2013, when James Gunn appeared onstage in Hall H to showcase the first trailer for the film. It was so unlike anything Marvel had ever done before, so far outside the box that I immediately fell in love with it and couldn’t wait to see more. Although that first trailer was well-received by the Comic-Con audience, the general public seemed to be scratching their heads in much the same way that I had when the film was first announced. Marvel fans would love this, no doubt, but could this bizarre little sci-fi romp with a cast of unknown characters actually work?

The answer is a resounding “yes,” as Guardians of the Galaxy is not only an exceptionally well-made comic-book film, but an exceptionally well-made film, period. It’s a sprawling space opera with a host of memorable characters, a joyous sci-fi romp through beautifully realized worlds, wildly inventive action sequences, and an almost nonstop barrage of humor and fun. The protagonists are a bizarre assembly of losers and misfits, with the CG-created Rocket and Groot providing some of the most emotional and human moments of the film, and it’s all brilliant. Marvel should be applauded for allowing Gunn the opportunity to realize his vision, because rest assured, this film wouldn’t have been nearly as good with someone else at the helm.

Guardians of the Galaxy has a distinct personality that sets it apart from other Marvel offerings, yet there are enough recognizable elements to remind audiences that it exists in the same world. Clocking in at just under two hours, the film maintains an impressively well-balanced pace, avoiding the problem of over-inflation that many superhero films fall victim to. I can’t think of a single moment when I wasn’t completely enthralled with everything that happens onscreen, and as soon as the credits began to roll I was ready to watch it all over again.