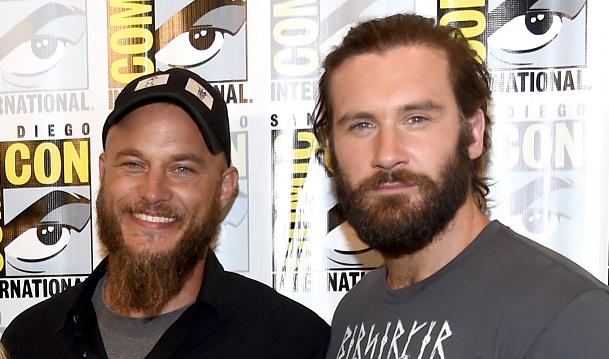 History’s Vikings returned to San Diego Comic-Con 2014 for their second appearance at the massive pop-culture event, where I was once again given the opportunity to catch up with cast members Travis Fimmel and Clive Standen. Season 2 has now come to a close and the cast was able to reminisce about the past and future while taking a break from filming the third season overseas.

The Vikings team made it back stateside specifically to take part in Comic-Con, where I was able to pull some tidbits from Travis and Clive about Season 3, currently scheduled to air in 2015 on The History Channel. Check out the highlights below and be sure to keep checking the site for part 2 of our Vikings SDCC coverage with Katheryn Winnick (Lagertha) and Alexander Ludwig (Bjorn Lothbrok).

On Rollo and Ragnar’s tumultuous relationship and reconciliation during Season 2:

Clive Standen: “We see in Season 2, Ragnar punishes [Rollo]. The brothers know each other more than any other character and [Ragnar] knows that Rollo wants to go and raid and fight. I’ve said it myself in Season 1, it was what I was born to do and the one thing he can do – it’s like punishing a child – [Ragnar] says “I’m going to go raid into England and you’re not going to come with me.” We see all that progress of Ragnar always punishing him, because the relationship is so scarred.

Scars do heal, but they’re scars and I think the relationship won’t be the same. But we’re now getting to a point in Season 3 where the brothers are back together and there are some things they are going to be forced to compromise on and work together on for the greater good of Kattegat.”

On whether it was hard finding out his character would betray Ragnar:

Clive Standen: “We knew it was going to happen, Michael [Hirst] kind of talked to me about it before leading up to the end of Season 1, we knew what was going to play out in Season 2. I think that’s what I find fascinating, that Rollo decides he’s going to trade in everything to be king for a day and it doesn’t actually work out, how he thought it would feel.

All I can say is that as much as he is on Ragnar’s side now, there’s still one thing that’s nibbling away at him and that’s his ambition. And that’s never going to go away. Because as a Viking in that society, your name means everything to you. He’s to’ing-and-fro’ing between going ‘Is this it? Is this all my life is now? My life is to just be second fiddle to my brother and worship the ground he stands on and just do whatever he says, and we’ll do this together as brothers?’

But there’s still something gnawing away at the inside of him. Is there more? Can you find another way of doing it, where maybe it’s nothing to do with betraying Ragnar? But he’s got to find somehow of fulfilling what he believes is inside.”

On how Siggy (Jessalyn Gilsig) fits into Rollo’s aspirations:

Clive Standen: “Siggy has always been there. I think Rollo has never realized how much Siggy has done for him behind the scenes. The big crux for that is she sleeps with King Horik . Out of love, she cheats on him. She says “I did it for YOU, Rollo!” but anyone would say that. Can you really ever deal with that kind of information? Can you really have a proper relationship with someone who is saying that they are sleeping around because they are doing it for you? It is very much a wedding of convenience. It’s tempestuous. That’s my new favorite word.”

Travis Fimmel: “We just saw him. We just saw Donal down in the lobby. He was here for Gotham. I had no regrets killing [King Horik]… he’s a great bloke, I wish Donal was still on the show.“

On what’s ahead for Ragnar in Season 3:

Travis Fimmel: “The first scene starts out off with all the trouble that power causes. I think throughout this year it really becomes alive, how hard it is to be a leader and all the sacrifices you have to make and all that sort of stuff.

Which I’m excited about this year, we go to Paris! Last year got caught up with so much family drama in Kattegat. So much drama that Ragnar and the boys, we didn’t get to explore like we wanted to. We set the farms up in England this year and then we’re like ‘What do we want to do next?’

Ragnar is a very curious character and he wants to see what else is out there. So he gets back to Season 1 where he just wanted to sail somewhere. So we do that at the end of the year. I haven’t read the scripts. But we go to Paree.”

On whether getting back to raiding in Paris gets Ragnar back to his strengths:

Travis Fimmel: “Yeah. He has women issues, a lot, Ragnar.”

On whether or not airing on The History Channel restricts how much license they can take with Vikings:

Travis Fimmel: “We take a lot of license.”

Clive Standen: “It’s more freeing than anything. Because everyone knows the beginning and the end of history. But it’s about how it plays out and that sort of gives Michael [Hirst] quite a lot to play with. You can know how some of these characters end up, you can just pick up a history book and you can read about Ragnar, Rollo, and Lagertha. It’s the bits in between. It’s getting from A to Z and that’s what Michael’s job is, to create all the way and make it exciting and fresh.

Because no one wants to be bogged down by stuff everyone has read before. History, the channel itself, gives us more creative license. But obviously our budget is not a film’s budget. I think what we produce with the limited money we have is amazing.”

Clive Standen: “We got an important one for us. We got visual effects.”

Clive Standen:  “Julian Parry, who is our visual effects supervisor. It’s incredible and the reason I think it’s incredible is: you don’t actually realize he’s done anything. It’s all about supporting with visual effects. It’s creating backdrops and matte paintings. Creating mountains that aren’t there. Snow and deer running across a scene and it all looks real. It’s so viscous and visceral and…

Clive Standen: “But it’s all thanks to him [Julian] and the reason I’m bringing this up now is because he’s the last person to take any credit for it and he’s now the one that’s been nominated for an Emmy. I’m so hopeful he wins it, because it should be about that. It shouldn’t be about seeing big dragons and things like that and going “Oh wow, that’s a visual effect!” You shouldn’t even know there are effects in the show.”

Travis Fimmel: “Actually, one of the actors did not know. You’re not going to find out who, but he was like “Oh! I didn’t know that was visual effects! [laughs]”

Clive Standen: “But that’s the greatest compliment to give someone like Julian.”

On new characters for Season 3:

Travis Fimmel: “I haven’t actually got to any of the new ones yet. We’re in England and they’re back in Scandinavia. We haven’t actually worked with Ben [Robinson, who will play Kalf, Lagertha’s trusted second in command] or, who else is there? A couple of people are coming in this next episode.”

Clive Standen: “And you know what? We kill a lot of them this season as well. [laughs]”

On saying goodbye to actors that depart the show:

Clive Standen: “You can say, “Is there a character that I would like to kill?” and I could say “yes.” But the actor that plays that character, that’s why I can’t answer it. Because we’re all a big unit now. That always feels really horrible to say out loud to say “Yeah, of course I want to kill that character” for the story, but I don’t want to lose the actor from the show. We lost a guy the day before we flew out [for Comic-Con 2014]. It’s a token for how much they’re loved, by the send-off we all gave them.”

On George Blagden and Gustav Skarsgård not being at Comic-Con:

Clive Standen: “George was going to be out and so was Gustav. George is actually shooting scenes and Gustav can’t be here because of personal reasons.”

Travis Fimmel: “He’s got a wedding.”

Travis Fimmel: “For a really good friend. He did say to tell hello to everyone.”

Clive Standen: “We killed Gustav. Floki is dead! [laughs] And he criiiied and he wouldn’t want to be here anyway. He stormed out.”

On adding to the show’s direction:

Clive Standen: “You do that through your character. Michael [Hirst] can write it, but there’s a certain interpretation behind anything. That’s why it’s very hard to say if someone is a bad actor. I just think that some things are interesting and some things are less interesting. It’s your job as an actor to translate what Michael has written on the page and created something. So you do have creative means within the writing. It’s more interesting or less interesting. That’s all there is.

On being able to grow their hair long and have beards:

Travis Fimmel: “Yeah, I don’t have much hair. But beards are good!” [interviewer’s note: Fimmel’s hair is cut for his role in the Warcraft movie]

Clive Standen: “Beards are good, but hair extensions are [a hassle]. Nine hours of sitting in a chair and having them glue in the hair and never being able to do anything with it.”

History’s Vikings will return for Season 3 in 2015, only on The History Channel.