Movie Review: ‘In the Heart of the Sea’ 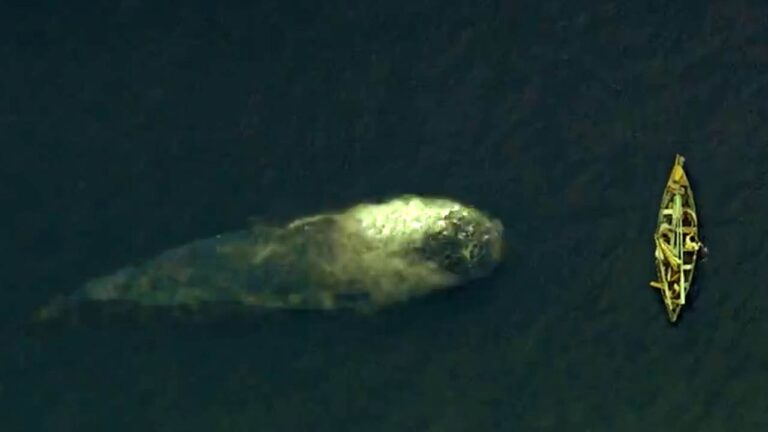 Like The Adventures of Huckleberry Finn or A Christmas Carol, Moby Dick is a classic novel that’s been adapted quite a few times, but there’s never been a definitive film version. It’s such an iconic piece of literature that bringing Moby Dick to the silver screen in this day and age almost sounds like a thankless task, even with a great director like Ron Howard behind the camera.

In the Heart of the Sea offers a unique approach to the story, however. This isn’t a straightforward retelling of Herman Melville’s work, but the true story that inspired his magnum opus. Howard delvers a visually stunning film that’s often thrilling, although it doesn’t stand out as a great American epic.

Ben Whishaw plays Melville, who meets with an old man named Thomas Nickerson (Brendan Gleeson). Nickerson recounts his days as a young lad at sea where he’s played by Tom Holland, aka the new Spider-Man. On a whaling expedition, the cabin boy is taken under the wing of First Mate Owen Chase (Chris Hemsworth) and commanded by Captain George Pollard (Benjamin Walker). As you can probably guess, the crew bites off a little more than they can chew when a massive sperm whale attacks their ship. From there, the film follows the men as they’re shipwrecked, stranded at sea, and resort to unspeakable methods of survival.

By far the best character in the movie is the white whale. Brought to life by state of the art special effects, this colossal beast just dominates every scene in it’s in. The problem is that there actually isn’t too much of the whale in the picture. Much like Jaws, it doesn’t show up until about halfway through In the Heart of the Sea. Even then, Monstro only pops up a few more times.

For the most part, the humans are the focus here, which would be great if they were unforgettable characters. There just isn’t really much to the crew, though. They certainly aren’t bad characters and performances are strong across the board. However, they’re survivors first and characters second. While we don’t want to see any of them die, the audience never really forms a strong emotional connection to these people either. There are also certain character dynamics that could’ve been fleshed out more, namely the rivalry between Hemsworth’s First Mate and Walker’s Captain.

So in a rather bizarre way, In the Heart of the Sea has the same strengths and weaknesses of the most recent Godzilla movie. It delivers in the monster department and offers some incredible action set pieces. Then when it comes to the humans and their struggles, the film is just all right. Nevertheless, the sheer scope of the movie is undeniably exhilarating and it is interesting to see where Melville got the idea for one of the most famous books ever written. If you’re looking for a big, exciting adventure with some history to it, In the Heart of the Sea does have just enough good stuff to go around. If you’re looking for something with complex characters and the same level of depth as Melville’s novel, though, keep in mind this is more style over substance.

In the Heart of the Sea delivers in terms of scope and action set pieces, but falls short when it comes to its characters.

Movie Review: ‘The Devil All the Time’