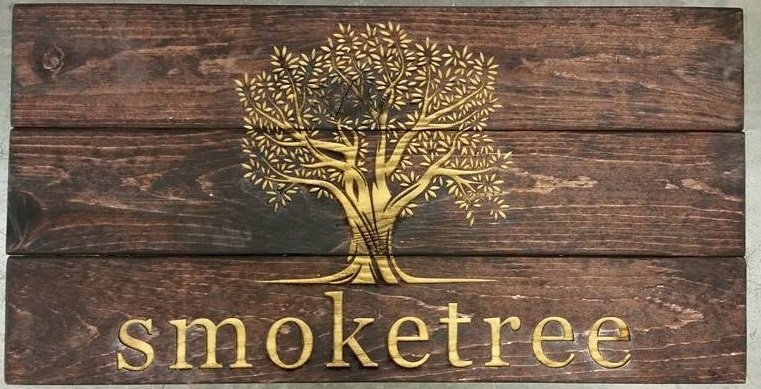 From Star Wars to Fallout, the local guys from Smoke Tree Workshop are bringing their unique brand of nerd-culture wood art to the masses in Arizona. These custom-made, hand-stained pieces are unlike anything you have in your geek cave, and you’ll be able to see them for yourself at Phoenix Comicon Fan Fest this weekend, Dec 4th-6th.

The Nerd Repository loves to support local nerd endeavors and we wanted to point our readers in their direction (just in time for your holiday shopping) because the work these guys do is tremendous. I sat down with founders Tom Wright and Bryan Camp to find out just how they got Smoke Tree Workshop up and running and what it takes to make these awesome pieces of one-of-a-kind fandom art.

This work you do is fantastic. How did you get started creating these pieces?

Tom Wright: I worked in the restaurant industry for several years and decided that I love the people I work with, but I hated my job. It was one of those things, I was making really good money but I was paying for it in soul currency. I just didn’t really want to do that anymore. I didn’t have a job lined up or anything like that.

I did take art courses and welding courses at Mesa Arts Center, and I had a lot of fun with that so I just decided, during the football playoffs, “I just can’t do this anymore. I want to watch football and hang out with my friends. I want to experience life.” So I quit, and gave a three-week notice.

I signed up for a tech shop in Chandler and they have this incredible creative space with 3-D printers and vinyl cutters, commercial textile manufacturing and wood shop. So I went in there and one of my hobbies was metal working, wood and furniture and stuff like that. To get to the metal shop, I would have to walk by these laser cutters every time I went in there. I would peek over and check them out. Finally I was just like, screw it, I paid the $100 to take the class to get cleared on those.

That’s how I started. Originally, I just wanted to do large format city skylines, and then I got started on what I guess you would call nerd culture. Way more fun. The looks on people’s faces. That sort of reaction is so much fun, and it’s still me being able to do some art stuff and be creative. It’s so much fun.

Bryan Camp: I was in the research world. That was also soul draining, so I started to teach, so now I’m teaching community colleges. I have a lot of time on my hands. I needed to do something and Tom was having fun with the art work and I said, “This is something that we can support you.” We wanted to support him and I could help do the sales and drive ideas on what to make, look for events cost-wise, get this thing to become real. It was way more than he could handle himself. So that’s where I came in.

So you guys were buddies, not business partners beforehand?

Bryan Camp: Yeah, we’ve known each other for 6 years. We hung out, but we started to lose Tom more and more with his job. Now he’s back and we get along really well. There’s two other guys that handle the computer aspect, they have the tools that we can use at home. But it all starts out with an idea. We’re thinking about what we can do to make money, while still having fun. Being married, I have to get approval to put things on our wall. I can get away with putting up something like our Spock piece in my living room, where I couldn’t do it with a poster.

Are you getting involved with the actual creation of the art now with Tom?

Bryan Camp: I’m taking a laser class to make the art and make the frames, do the staining and sanding down. There’s a lot of process to it. There’s more than just going in with the laser.

Do you guys create the designs themselves, or do you commissions, patterns, etc?

Tom Wright: We do a little bit of everything. I’ve got a lot of artist friends that are like, “Yeah, I can draw that up for you. That’s no problem.” We also buy a lot of rights to use some of the images. Especially the ones that center around Star Wars or Star Trek. It’s just easier for us and easier for me. I like to say I’m an artist, but it takes me a long time to get to what I would consider a finished piece. To get licensing is just easier and a lot of times I like their work better than mine. We definitely want to take care of people. Especially because this medium is so new. You don’t see a lot of wood nerd inlay art out there.

Bryan Camp: One of the beauties of this style we do is that it allows us to do just about anything. As long as we can make an image that the laser can accept, we clean it up a little bit, we can make it work.

Do you guys take a lot of custom orders?

Tom Wright: Usually about half of our orders are instigated from customer request. They want different colors, or they want a specific design or they’re like, “Hey, can you find someone that does the Green Lantern logo?” and we’re like, “Yeah, cool. We can do that.”

Bryan Camp: We did a Jean Grey [Dark Phoenix] one. It was actually a wedding gift that they wanted for their groomsmen/bridesmaid gifts. So we did Green Lantern and Jean Grey. Took a little time to build it up, but now that we have a file it’s a lot easier.

Tell me about the designs and the process, because it’s obviously not just a laser etching and you’re done. There’s colors and layers…

Tom Wright: Once we get the design that we like, we can figure out what material we want to cut it out of. The material that I really prefer is Baltic birch. It’s called Finnish Plys in the trades, and it’s used for cabinet making and furniture making. It’s got an ambiguous grain so you can stain it in a different color and it’ll look there’s a walnut stain or an oak. It doesn’t react very much to humidity or temperature changes. It’s not going to warp. It’s very resilient.

Once we have the image, we dial in the laser settings. Depending on the piece, we get 20-30 tiny little wood cutouts. You sand them individually and stain and seal them and glue them to another Baltic birch backing board. Then we put all of that into our own frames, which we make. We looked into outsourcing the frames, but even if you outsource – wow, frames are really, really expensive.

Bryan Camp: We can do it ourselves cheaper and make it look really nice.

Tom Wright: I feel like we’ve come up with what I would call a rustic frame. It’s not a fine art frame, but man, I’m really a fan of our frames. We make them all ourselves and it’s all by hand.

How long do the pieces take from start to finish?

Tom Wright: For most of these the real work isn’t the laser work, it’s the finishing work. It’s one of the reasons we use the birch.

What about pieces that have multiple colors?

Tom Wright: A lot of experimenting.

Bryan Camp: Seeing which ones work and which don’t.

One of the biggest elements for most fan memorabilia is the price point. What can people expect to pay for these?

Bryan Camp: We’re well aware of that. We’re in our mid-20’s, early 30’s. There’s a lot of things we have to pay for. We’re trying to find that right price point where we’re not over the top. We’ve had people tell us that we could be selling our stuff for way more now. But we want people to get these hanging up in their houses and get people excited about it and think about them for gifts.

Bryan Camp: We keep our overhead low so we can pass the savings on. We still get a good enough profit margin.

What would say has been your biggest seller?

One of the first pieces I ever did was Space Invaders piece and people would look at it and say, “What is that? I know that. Where is that from?”

Bryan Camp: The Legend of Zelda Tri-Force has been huge. We made a Fallout thumbs-up guy for Phoenix Comicon Fan Fest. It’s the stuff that people stop by and see and are like, “I need that right now. We’re not fine art people, I need that right now in my house.” That’s the audience we’re looking for.

Smoke Tree Worshop will have product on hand for purchase at Phoenix Comicon Fan Fest, and will also be taking orders for the holidays. You can find them at Exhibitor Booth #415 and tell them Nerd Rep sent ya!

Not going to be at Phoenix Comicon Fan Fest, but still want some badass art for your nerd wall? Check out Smoke Tree Workshop on their Facebook page.