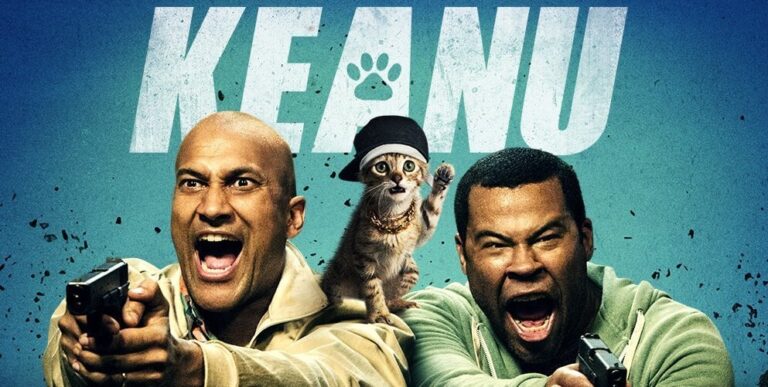 Keegan-Michael Key and Jordan Peele are two of the funniest and most talented people in the comedy game today. They’re popular with the young crowd, yet not quite a household name, but that might be about to change with their first outing onto the big screen, the feline action/comedy caper Keanu.

When slacker Rell (Peele) spirals into a depression after his girlfriend leaves him, the appearance of an adorable kitty on his front porch brings him back to life. But when his apartment is mistaken for a drug dealer’s home, Rell returns to his place to find the kitty he named Keanu is missing. Rell and his uptight cousin Clarence (Key) embark on a journey to find the missing feline that takes them into the seedy drug underworld, where they are completely unprepared for what they’ll need to do to save poor Keanu.

The premise is utterly silly and sounds better suited for a 3-minute sketch on Key and Peele’s now finished sketch series on Comedy Central. But the chemistry of these two actors is undeniable as it carries much of the film through what could’ve been painfully bad scenes. The script has a few really funny and clever moments, but most of what works is due to its two lead actors.

Key is particularly hilarious as he switches from his suburban dad personality to his hardened street thug in order to pass as a true gangster. Peele plays things a bit more subtle as Clarence’s stoner buddy, but he’s not without some gut-busting character moments while undercover as well. Keanu mixes the lead duo’s awkward scenarios and slap-stick humor with some pretty entertaining action scenes to boot. The film definitely displays a love for the genre and has shades of another great action/comedy film homage: Hot Fuzz. It’s not as clever or fun as that one, but Keanu still has some great moments.

Another film Keanu lovingly seems to borrow from is John Wick, which is not coincidence that it’s a Keanu Reeves film. Only this time, the little furry sidekick doesn’t bite it in the opening of the movie and has a whole film to make audiences say “awww” and give everyone the warm fuzzies.

Key and Peele are in virtually every scene (even pulling double duty as the notorious assassins the Allentown Brothers), but Method Man has a sizeable role as Cheddar, the big time drug dealer who unknowingly kidnapped Keanu. Method Man is completely comfortable – basically playing a version of himself – and is both funny and subtly creepy. Will Forte also shows up as Rell’s drug pushing neighbor Hulka, effectively stealing the scene in most of his all-too-brief appearances in the film.

The biggest downside to Keanu is the repetition of similar types of comedic beats. The film goes back to the well one too many times with Rell and Clarence profusely swearing, dropping the N-word and goofily trying to talk themselves out of dangerous situations. Earlier I also mentioned the premise sounds better suited as a sketch, and with the 98 minute run time is just too long. Keanu is too thin on story and not even this talented cast can stretch things enough to stay consistently entertaining.

All in all though, Keanu is a solidly funny film and big “win” for Keegan-Michael Key and Jordan Peele. The film has plenty of big laughs, an adorable kitty and serves as a successful launch of the comedic duo’s big screen careers. General audiences should lap up some big laughs like a saucer of milk and that’s really the point of these types of movies, right?

Key and Peele bring some big laughs and an adorable little kitten to their solid comedic feature film debut. Aside from relying too much on the same type of urban humor jokes and sticking around too long with a longer- than-necessary running time, audiences should have a silly, good time with this one.