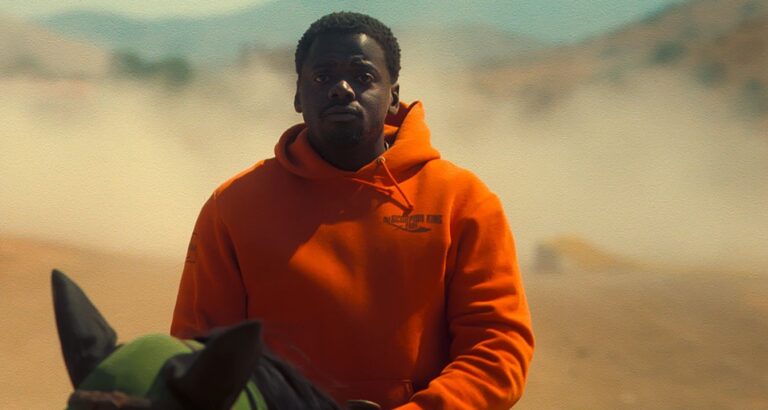 Jordan Peele’s latest (extraterrestrial based?) mind-bender Nope proves the director is working at levels no one else is close to matching among his peers in the current age of cinema. This film is the most audience accessible and also clearly the most ambitious of his endeavors to date. If the brilliant Get Out was the announcement of his arrival, Nope is Peele taking his seat at the roundtable with the likes of Hitchcock and Spielberg, who defined pop culture thrillers for generations.

The difficult thing for any critic when reviewing secretive plot twist-y films is how much to tease or leave out to preserve the experience for the uninitiated. M. Night Shyamalan’s work grew to be so reliant on a big surprise, that most of his later work is completely forgettable beyond The Twilight Zone-esque swerves, leaving very little need to revisit them once the gimmick is spoiled. Nope threads a very similar needle, but there’s no bait and switch here. Audiences will get what the marketing has sold them, but in just enough of an unexpected way that you’re never too sure what will happen next.

What I can tell you is the directing is superb. Peele’s tracking shots, tension building and character development take what is essentially a basic premise — a UFO or UAP mystery sighting — and slow burns it into one hell of an intense nail-biter. Every little detail from the creepy score, the haunting sound designs and the gorgeous isolated setting makes for stunning suspense/horror when things legitimately gets unleashed. Nope is Jordan Peele’s sci-fi homage to Jaws, which is genius in its simplicity, but also Nope doesn’t have to hold back when the time comes for spectacle. Once the threat is revealed, it’s nothing short of an iconic piece of stellar craftsmanship from the designers on the film.

Daniel Kaluuya as OJ Haywood and Keke Palmer as Emerald Haywood anchor the film with their wonderfully sincere sibling dynamic. OJ is stoic and hard to read and Emerald lights up a room, but can’t get out of her own way, yet there is a terrific implied history that the actors portray, really endearing themselves to the audience. Steven Yeun is also great casting as the wormy former child star turned event entrepreneur that owns a Western-themed park outside the Haywood ranch called Jupiter’s Claim. Then just when you feel like the movie is ending, they bring back in fantastic, gravel-voiced character actor Michael Wincott to aide the Haywood’s in a last ditch confrontation — and folks, Wincott is deliciously bonkers in his limited screen time.

Let’s also not forget, the writer, director, producer is also one of half of the best sketch comedy duo of the last two decades, and it shows when Nope slices the tension with impeccable comedic timing. For a movie full of mystery and interesting characters, I found myself laughing far more than I ever would have expected entering the theater. Peele’s direction and script set up little hilarious gems and the cast flawlessly knocks ’em down. Despite all this success, there are a few minor cracks in story choices during the wild final act, but nothing egregious enough to take away from what is an overall great film going experience.

Despite some good to mediocre tent pole films, the summer blockbuster movie season of 2022 finally has a breakout, original property in Jordan Peele’s Nope. It harkens back to the original summer blockbuster in the best way possible, with fresh faces and unknown threats that both scare and delight. And yes, from now on every film Peele does should include his name in the title as a certificate of authenticity, a testament to his impressively diverse and growing film resume.