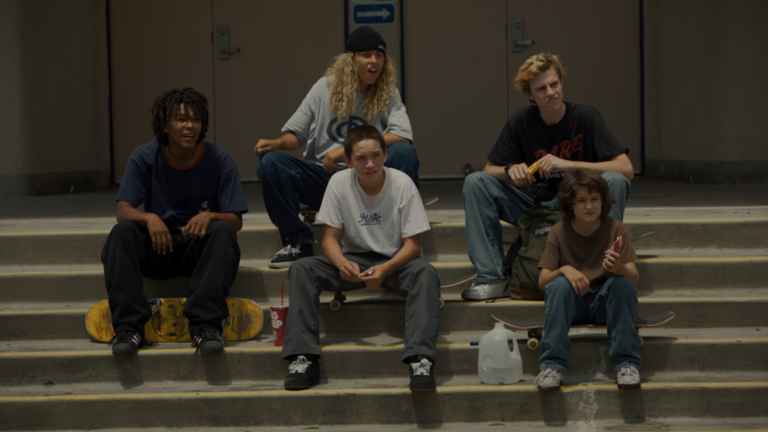 When we first meet 13-year-old Stevie (Sunny Suljic), he’s being hurled into a wall and pummeled mercilessly by his older brother Ian (Lucas Hedges). The next scene finds a shirtless Stevie looking into a full-length mirror and contemplating the collection of bruises that cover his torso – obviously, these beatings are a regular occurrence, and Ian clearly knows better than to leave signs of the abuse in a place where they might be noticed by their mother, Dabney (Katherine Waterston).

Despite the regular physical assaults, Stevie idolizes his older brother and wants only to make some kind of connection. But as Ian repeatedly rebuffs these attempts, it’s no wonder that Stevie soon begins looking for role models outside the household, eventually gravitating toward a group of teens that hang around a local skateboard shop. At first, Stevie watches from afar, pretending to shop for clothing while eavesdropping on the older boys’ conversations, but it doesn’t take long before he’s introduced to the group by Ruben (Gio Galicia), a boy only slightly older than Stevie who offers the newcomer a cigarette and then admonishes him for expressing gratitude. “Don’t thank people,” he warns. “They’re gonna think you’re gay.”

It doesn’t take long for the rest of the group – aspiring skate pro Ray (Na-kel Smith), wannabe filmmaker Fourth Grade (Ryder McLaughlin) and borderline burnout Fuckshit (Olan Prenatt) – to warm up to Stevie, simultaneously amused by his wide-eyed enthusiasm and impressed by his willingness to keep pace with their antics. His pale skin quickly earns him the nickname “Sunburn,” and hanging around with the older kids opens Stevie’s eyes to a lifestyle his pre-pubescent mind can barely comprehend. But the booze and the pot and the late-night parties can barely mask the almost crippling insecurities that each member of the tribe feels, from Fourth Grade’s shame over his family’s extreme poverty to Fuckshit’s growing jealousy over the attention Ray receives from a pair of well-known pro skaters.

As a snapshot of the culture and time period, Mid-90s is pitch perfect, and first-time director Jonah Hill’s decision to populate his debut with non-professional actors lends authenticity to the events that play out onscreen (the soundtrack, curated by Hill and featuring cuts from Nirvana, Cypress Hill and other seminal acts from the era, also serves as a constant reminder of when the film takes place). But there’s very little in the way of an actual plot, feeling more like a collection of loosely related scenes than a cohesive narrative, and the conflicts that arise – Ruben’s growing discomfort at being replaced by Stevie as the group’s “little brother,” or the rift that forms between Stevie and Dabney – are never quite resolved.

Likewise, even though the core group of personalities are given depth and nuance, those on the fringe are under-developed. There’s no explanation given for Ian’s rage, nor for the seething hatred he feels for his mother and younger brother, and Dabney barely even registers as a parental figure, save for a heated confrontation with the older boys when she discovers Stevie has been experimenting with illicit substances. Hill also fails to adequately explore the darker side of Stevie’s personality and his penchant for self-harm, flagellating himself with a hairbrush after an act of larceny or wrapping a video game cord around his throat following another violent interaction with Ian. This is clearly a deeply troubled child, and when the credits roll we have no idea whether or not he’s going to be okay.

But perhaps that’s not the point of this film: indeed, Mid-90s seems more interested in providing a slice of life, fly on the wall perspective of the culture, rather than forcing the audience to truly examine the effects – both negative and positive – these experiences might have on an impressionable youth. For some viewers, the hazy nostalgia of skateboards, baggy jeans and grunge rock will be enough to capture their imagination and keep them glues to the screen, but others are likely to find themselves craving a bit more than what Hill offers here.