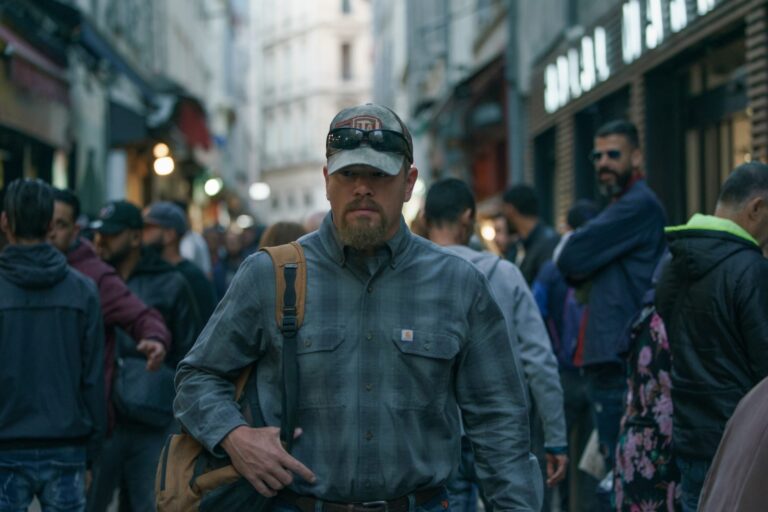 Oscar winner Tom McCarthy’s Stillwater finds Matt Damon — saddled with a thick goatee, a trucker cap and a pair of wraparound shades — portraying Bill Baker, a good ol’ boy oil rig worker who travels to the French port city of Marseilles to visit his daughter Allison (Abigail Breslin), five years into a decade-long prison sentence for the stabbing death of her girlfriend. Bill wasn’t much of a father during Allison’s youth, and his frequent trips across the ocean are borne from genuine concern, but also guilt over his past shortcomings.

Clearly inspired by the murder of Meredith Kercher and the subsequent arrest and conviction of American student Amanda Knox, the film begins with the DNA of a fairly rote procedural: new information regarding Allison’s case has come to light, and she wants her lawyer (Anne Le Ny) to reopen the investigation. Hearsay may not be enough to sway the judge, but Bill takes it upon himself to keep his daughter’s hopes alive by surreptitiously embarking on his own investigation. Obviously, the language barrier is a problem, so he enlists the help of theater actress Virginie (a terrific Camile Cottin) to act as his guide and translator, in exchange for completing odd jobs and helping out with her eight-year-old daughter, Maya (Lilou Siauvaud).

It’s here where Stillwater begins to veer into surprising territory, foregrounding the growth of Bill’s new and unconventional family unit while his search for answers takes a backseat. Damon plays Bill as a fish out of water, but one that’s about as amenable as can be expected: he doesn’t flinch when Virginie asks if he owns a gun — the answer, of course, is “two” — and when someone asks whether or not he voted for Trump, his answer is genuinely surprising. With his sleeveless T-shirts, bald eagle tattoo and Oklahoma drawl, his outward appearance borders on caricature, but he prays over each meal, addresses everyone he meets as “sir” or “ma’am” and treats Maya with genuine warmth and affection. These latter scenes are some of the film’s best, as circumstances offer Bill an opportunity to get right all the things he screwed up during his first run at fatherhood.

Of course, it’s Allison that brought Bill to Marseilles in the first place, and Stillwater eventually returns to the issue of her incarceration. As Bill continues his attempts to track down the true culprit, McCarthy shines a light on the casual racism that permeates the city, from the local police who seem to relish each opportunity to put an immigrant in jail, to a scene where a bar owner who may have witnessed the events preceding the murder eagerly offers to point the finger at any young Arab kid of Bill’s choosing, regardless of whether or not they were actually involved. “They’re all guilty of something,” he insists, much to the horror of Virginie (and the audience).

The dramatic third act, which sees a desperate Bill adopt an increasingly reckless approach that threatens not only Allison’s case, but also the safety and well-being of Virginie and Maya, is a real heartbreaker. Damon, Cottin and Breslin are pitch perfect here as various secrets and deceptions come tumbling out, and the final moments hit like a gut punch. Stillwater questions whether some truths are best left unsaid, but doesn’t shy away from the pain those truths can inflict, and although it’s difficult to classify the ending as “happy,” it feels like McCarthy delivered precisely the sort of conclusion this story deserved.