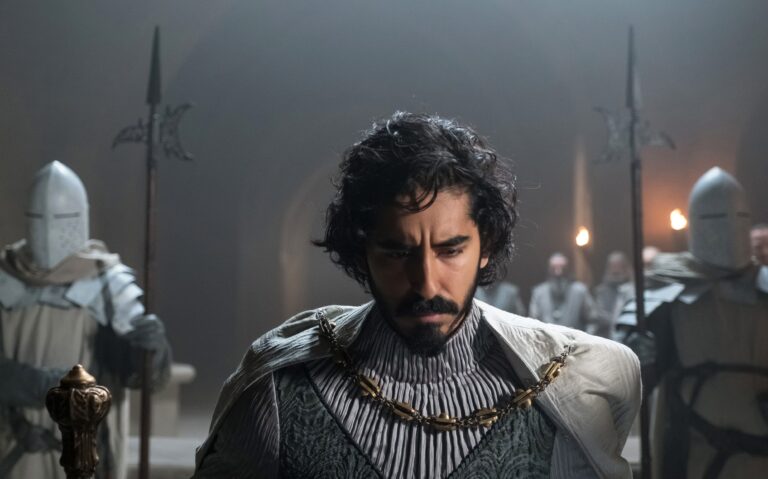 Despite the enduring popularity of the legends, there’s never been a truly great cinematic depiction of King Arthur and his heroic Knights of the Round Table (although if you argued in favor of John Boorman’s 1981 Excalibur, I’d be willing to listen). The Green Knight, director David Lowery’s mind-bending adaptation of a lesser known Arthurian tale about a young knight desperate to prove himself, is a bona fide masterpiece, wrapping dreams of heroism and chivalry in a cloak of otherworldly horror that slowly tightens around your throat until you can scarcely breathe.

It’s Christmas morning, and Gawain (Dev Patel) awakens in a brothel to shouts of “Christ is born” as he bids farewell to his favorite courtesan, Esel (Alicia Vikander) and rushes out the door. He barely has time to plant a kiss on the cheek of his mother (Sarita Choudhury) before hurrying to the castle for a holiday celebration, where an ailing King (Sean Harris) — Gawain’s uncle, as it turns out — beseeches him to regale him with a tale of himself. “I have none to tell,” he admits somberly, to which the Queen (Kate Dickie) interjects, “You have none to tell yet.”

As if on cue, the gates to the hall are thrown wide and a black horse rides into the hall, bearing a hulking creature on its back. Clad in green armor, with a face that appears to have been carved from wood, the mysterious visitor issues a challenge: let any of the King’s men attempt to strike him, and if they’re successful, he’ll be permitted to return the same blow in kind, exactly one year later. Taking up the King’s own sword, Gawain vaults over the table to meet the Green Knight, who drops to a knee and bows his head, prompting Gawain to cut it off completely. It’s only after the knight rises to his feet, picks up his own head and croaks “one year hence” before riding off into the night that the overzealous warrior realizes the gravity of what he’s done.

But a bargain is a bargain, and Lowery’s film charts Gawain’s journey to make good on his promise, traversing the countryside in search of the chapel where the Green Knight awaits. As if embarking on an odyssey all but guaranteed to end in death isn’t bad enough, the expedition itself is rife with peril, as Gawain encounters a headless spirit (Erin Kellyman), a menacing thief (Barry Keoghan) and a peculiar Lord (Joel Edgerton) who doesn’t seem especially bothered by the notion that his wife (Vikander in a dual role) is eyeing Gawain with a lustful eye. Throw in a talking fox, a herd of lumbering nude giants, and increasingly hallucinogenic imagery — all potential byproducts of the mushrooms a ravenous Gawain scooped off the forest floor — and there’s quite a bit more to digest than your average sword-and-sorcery epic.

Lowery’s heavy use of natural light and real-world locations (with the Irish countryside standing in for England) gives the film a grounded, tangible quality, even as it becomes increasingly surreal en route to Gawain’s reunion with the being he decapitated the previous holiday. The closer he draws to his destiny, the more unsure of himself he becomes; the more his valor and virtue are challenged, the more his will begins to falter. Patel plays all of this masterfully: the fear, the shame, the tenacity, the boldness and everything in between. It’s arguably the best work of his career, which makes it a fitting companion for Lowery’s most stunning and evocative film yet.