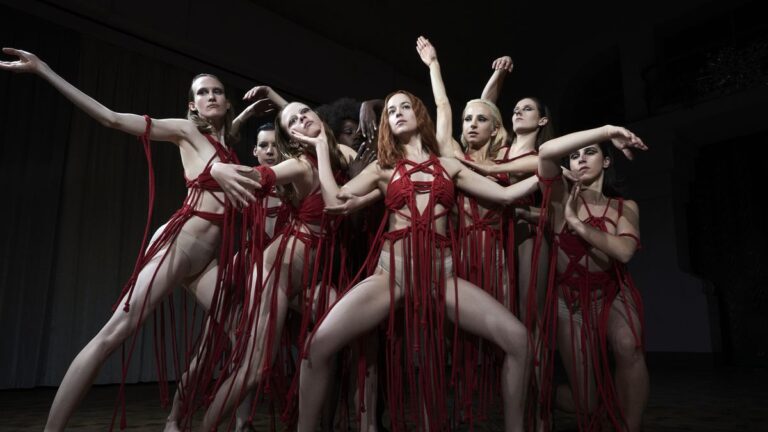 Told in “six acts and an epilogue set in divided Berlin” as a title card helpfully explains, Luca Guadagnino’s Suspiria is less a remake of Italian horror master Dario Argento’s 1977 film, and more of a complete reimagining. The basic premise of a young woman traveling to Germany in hopes of joining a dance troupe secretly run by a coven of witches remains the same, but the similarities end there: where Argento’s film reveled in excess, Guadagnino opts for restraint, with a muted color palette and a focus on building atmosphere rather than delivering gore-soaked thrills (at least until the finale).

The film opens when a terrified young woman named Patricia (Chloe Grace Moretz) bursts into the office of psychiatrist Josef Klemperer, raving about mysterious events occurring at the famed Helena Markos Dance Company. Klemperer (billed as Lutz Eberdorf, but actually Tilda Swinton under multiple layers of makeup and prosthetics) initially dismisses Patricia’s babbling as nothing more than paranoid delusions, but when the girl goes missing and Klemperer begins examining her journal, he begins to suspect that something may indeed be amiss at the academy.

Meanwhile, Ohio native Susie (Dakota Johnson) arrives in Berlin to audition for a spot in the troupe, and despite her lack of experience – no doubt a result of her strict Mennonite upbringing – the raw talent she displays catches the eye of Madam Blanc (also Swinton), the company’s lead instructor. Clad in flowing dresses with her hair pulled into a ponytail, and rarely seen without a cigarette in her hand, Blanc cuts such an intimidating figure that it’s no wonder most of the girls are terrified of her. She has a tendency to push her students to their limits, and sometimes well beyond their breaking point, such as Olga (Elena Fokina), a star pupil who angrily storms out of a rehearsal after declaring Blanc and her subordinates to be witches, meeting with a grisly fate not long after.

Whether or not Olga means this in a literal sense is up for debate, but she’s not wrong: unlike Argento’s film, Guadagnino acknowledges the true nature of the academy’s instructors from the early going, revealing a behind-the-scenes power struggle between devotees of Madam Blanc and those allied with the ailing Madam Markos (Swinton, again). As Susie begins to emerge as the troupe’s most gifted performer, she’ll have a role to play in these machinations, unless her overly suspicious roommate (Mia Goth) discovers the true circumstances behind Patricia and Olga’s disappearance.

At 152 minutes, Guadagnino’s Suspiria runs a full hour longer than the original film, moving at a languid pace that will almost certainly test the patience of audience members hoping for a more traditional horror experience. Most of the additional screentime is devoted to material that seeks to firmly establish the film’s place in time, with events such as the hijacking of Lufthansa Flight 181 playing out over radio and television broadcasts. There’s also ample attention paid to Klemperer’s ongoing investigation of the academy, spurred onward by an ever-present grief over the loss of his wife during the early days of World War II – if he can save these young women from whatever cruel fate awaits them, perhaps that will be enough to set his conscience at ease.

As mentioned above, this version of Suspiria is all about atmosphere, but make no mistake: there are some genuinely horrific moments, most of them used to punctuate long periods of tension. Chief among them is a brilliantly edited sequence where Susie, auditioning for the lead role in the troupe’s signature piece, unwittingly terrorizes and tortures a fellow dancer trapped in a mirror-lined room. With each of Susie’s violent twists and thrusts, the other girl’s body is hurled into walls and contorted into grotesque, unnatural shapes. Ribs crack, arms are torn from their sockets, and internal organs are punctured in one the most effective body horror sequences in recent memory. The film’s grandiose climax offers significantly more in terms of blood and gore, but can’t match this moment for sheer brutality.

With so many differences between Guadagnino’s film and the original, it’s nearly impossible to make a determination on which version is better – in truth, each is likely to appeal to a very different audience. If Guadagnino had set out to craft a horror film that adhered to genre tropes, then it would be easy to peg Suspiria as a misfire, as there’s almost nothing conventional on display here. But as an exercise in making viewers increasingly uncomfortable, building (and sustaining) a sense of foreboding and dread, it undoubtedly accomplishes its mission.