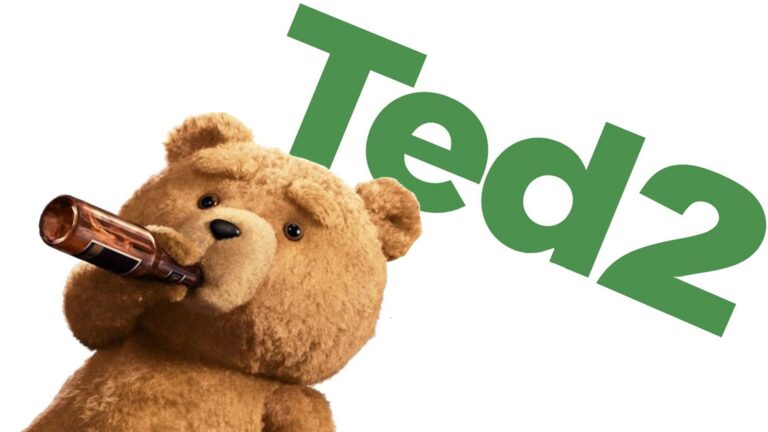 Ted 2 brings the raunchy bear and his best buddy back to the big screen for more pot smoking, pop-culture referencing mayhem following the massive success of the first film. Ted creator and star Seth MacFarlane’s brand of humor isn’t for everyone and after his box office flop A Million Ways to Die in the West, many wondered if Ted was a big screen one-hit wonder.

Surprisingly, Ted 2 is a clever, thoughtful comedy sequel wrapped inside the expected potty humor jokes. It refrains from mimicking the story and comedic beats of the original, but instead takes its characters on a fresh new adventure with lots of big laughs.

The film opens with the wedding of Ted (Seth MacFarlane) and Tammy-Lynn (Jessica Barth) and a fantastic old-school classy musical number – the type MacFarlane always does so well, only bigger. Ted’s best friend and “thunder buddy” John (Mark Wahlberg) is at his side as always, but he’s been struggling to get past the break-up with Mila Kunis’ character from the first film.

But when the government decides to take away Ted’s rights (due to the return of an old adversary) as an individual and annul his marriage, the boys hire attorney Samantha Jackson (Amanda Seyfried) to fight the good fight and restore Ted’s rights and prove he’s a person, not property.

Ted 2 impressed me by how the script wisely avoids revisiting the same story arcs and jokes used in the first film. So many comedies take the easy way out with sequels and provide the same movie over again with a new skin – I’m looking at you, Dumb & Dumber To.

Not only does the film craft a brand new, very funny tale, but Ted 2 managed to keep an impressive amount of huge belly laughs out of their marketing for the film. Perhaps MacFarlane learned his lesson from A Million Ways to Die in the West, which spoiled almost every good joke in its promos, but much of this film will make audiences laugh with quite a bit of unexpected material – my favorite being a couple of nerd-tastic sequences in the film’s third act.

Wahlberg and MacFarlane are almost on cruise control with their Boston buddy schtick, but their chemistry is so effortless and fun to watch that you can’t help but enjoy their silly friendship. Amanda Seyfried and Morgan Freeman are the only real major cast additions and both do admirable jobs with the screen time they’re given. Seyfried got to do more than Kunis, who played the wet blanket to the boy’s antics for much of the first Ted, but Seyfried gets to play a bit more in the comedic situations.

If you’ve never liked Family Guy and the original Ted wasn’t your thing, you can steer clear of Ted 2. But the underlying sweet story (that obviously critiques the ongoing civil rights struggles) and the limit-pushing, crass stoner humor are at their MacFarlane-y best in this sequel. The story refreshingly goes to new places and the jokes are mostly new (with quite a bit held back from marketing) and is the first truly funny comedy of the year.

If you like Seth MacFarlane’s style of humor, this is a return to form. There are lots of big laughs that are thankfully not given away in the marketing, many of which hilariously push the boundaries of good taste. More importantly there's an actual sequel story worth telling, rather than just the usual recycled jokes from the first film.