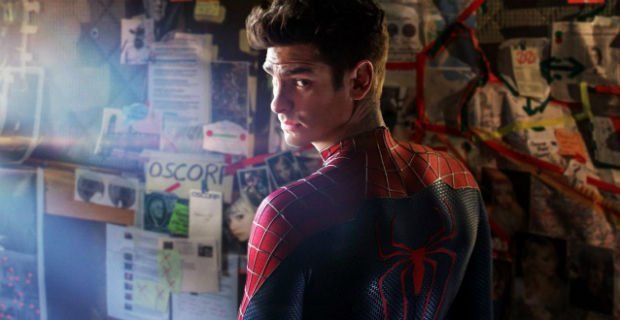 Your friendly neighborhood wallcrawler is back in theaters and once again finds himself trying to prove to audiences that his franchise reboot was not premature. Although I may not have spider-sense, I can certainly feel that there are going to be just as many split opinions among the audiences for The Amazing Spider-Man 2 as there was for its predecessor, but for a whole new web of reasons this time out.

Andrew Garfield squeezes back into the red and blue tights and finds his Peter Parker graduating high school and fighting off a heaping of guilt for disregarding Captain Stacy’s (Denis Leary) dying wish for Peter to stay away from his daughter Gwen (Emma Stone) at the end of The Amazing Spider-Man. Not to mention the unresolved mystery of why Peter’s parents left him behind keeps popping up and slapping him in the face at the worst times, while his Aunt May (Sally Fields) seems to be holding back crucial info about it from Peter.

But after Spider-Man’s chance encounter with OsCorp employee Max Dillon (Jamie Foxx) and the return of Peter’s childhood friend Harry Osborn (Dane DeHaan) set dangerous events in motion, Peter Parker/Spider-Man finds himself wrapped deep in a conspiracy that threatens everything and everyone he holds dear.

The Amazing Spider-Man 2 gets many things so incredibly right with Spider-Man that it’s terribly frustrating when the film itself does so many things wrong with its execution. Andrew Garfield is just fantastic as Spider-Man, and he’s totally hit his stride with this film. The humor, the attitude, the witty one-liners of Spidey – it’s all there. Emma Stone effortlessly steps back into the adorable shoes of Gwen Stacy and still remains one the best love interests in modern superhero cinema.

But it’s not the heroes of the film that are the problem, it’s the villains. And not how you might think, because over-crowding is not really the issue with this installment as it was with Raimi’s Spider-Man 3. Director Marc Webb does a good job of dividing up the screen time (even Paul Giamatti’s Aleksei Sytsevich/The Rhino is given two fun and perfectly brief sequences). The problem is that the villains in this film are cartoons that go from goofy to scary and back again, resulting in conflict that just isn’t compelling outside of its flashy CG action.

Regardless of what the recent marketing tells you, this is definitely Electro’s (Jamie Foxx) movie and his character is so campy for the first part of the film I couldn’t help but be reminded of Jim Carrey as Edward Nygma in Batman Forever. When the character is using his powers and destroying things the action is gorgeous, fast-paced and incredible, but to no fault of Jamie Foxx, as soon as the sparks stop flying everything falls apart again. The script by Alex Kurtzman, Roberto Orci and Jeff Pinkner treats him as a one dimensional nerd character that immediately turns murderous, towards even his idol Spider-Man, as soon as he acquires powers.

Dane DeHaan does some nice out of costume work (which applies to everyone in the film) as the new Harry Osborn, with a very different Green Goblin back story compared to James Franco’s version. Unfortunately, when Harry transforms into his alter ego and starts using his powers, he quickly goes from an interesting layered character to a lame comic-book cliché and is used for an obviously setup plot device in the film’s climax, rather than serve any real purpose.

Even though the film fails to mesh the goofy fun of Raimi’s film with the darker more grounded tones of Marc Webb’s first film, the giant battle sequences have improved dramatically and deliver on all levels expected of large summer set-piece fun. Cinematographer Daniel Mindel makes The Amazing Spider-Man 2 pop with color and wonderfully framed shots and Webb has really figured out how to make Spidey move with weight, but still retain his superhuman acrobatic skills.

I also have to mention that the film’s score is extremely interesting and refreshingly different this time out. Hans Zimmer teams up with The Magnificent Six (Pharrell Williams, Johnny Marr, Michael Einziger, Junkie XL, Andrew Kawczynski, and Steve Mazzaroritten) and really adds personality to the film. Zimmer’s work has been incredible as of late, and his work for Electro is a powerful, almost nightmarish dub-step style theme that seethes with energy that perfectly embodies the character.

The film has a solid indie romance vibe, monstrously good action sequences, and great cast performances going for it, but its indecisive tone choices make The Amazing Spider-Man 2 too schizophrenic to be a really good film. Instead you only get pieces of what could have been the best Spidey movie ever made, but you’re left with raised questions about whether a creative regime shake-up is needed so Garfield can get the truly great Spider-Man film he deserves for his next swing around the block.