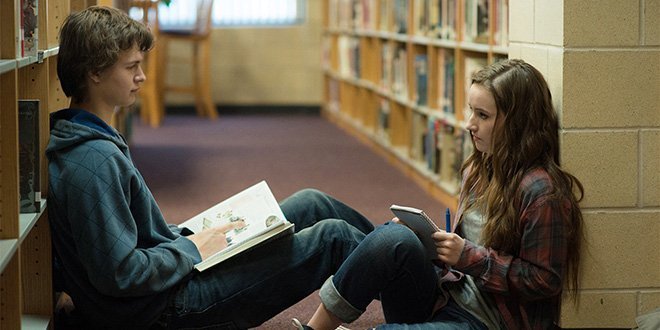 Jason Reitman’s Men, Women and Children takes aim at communication in the digital age, offering a sobering and uncomfortably accurate portrait of the way we connect – or rather, fail to connect – with each other when there’s a wealth of technology at our fingertips. Take Don (Adam Sandler) for example: a quiet schlub whose sexless marriage to Helen (Rosemarie DeWitt) finds him sneaking into his son’s room to feed his internet porn addiction, while his wife struggles with the temptation of using a cheating website to start an extramarital affair. This is the kind of issue that an open dialogue and honest communication could likely overcome – but that would require both of them to put down their iPads or look away from the television.

There’s also Hannah (Olivia Crocicchia), a fame-obsessed cheerleader who force-feeds her sexuality to everyone around her in hopes of blazing a path to stardom, Kardashian style. It doesn’t help that she’s enabled by her mom, Donna (Judy Greer), a failed actress who constantly snaps photos of her daughter for a “modeling” website that happens to include a private section reserved for paying members. Hannah has a thing for Chris (Travis Tope), Don’s football player son whose own internet porn habits would not only put his dad’s to shame, but have also left him unable to become aroused by anything but the images on his monitor.

Most tragic and heartbreaking of all is Allison (Elena Kampouris), so desperate to catch the eye of her crush that she developed an eating disorder after overhearing him make a disparaging comment about her weight. Now pale and waifish, she maintains her figure by seeking “support” from an online forum dedicated to staying thin at any cost, offering such helpful hunger-battling hints as “drink water and wait five minutes.” Their motto? “Pretty bitches never eat.”

At the opposite end of the spectrum is Patricia (Jennifer Garner), a suburban parent who redefines the term “overprotecrive” as she demands that daughter Brandy (Kaitlyn Dever) surrender her cell phone on a regular basis so that she can read her emails and text messages, in addition to poring over pages of chat logs and using a GPS locator app to monitor her daughter’s movements whenever she leaves the house. Patricia is convinced that she’s keeping Brandy safely out of harm’s way, yet remains oblivious to the fact that she’s stifling any chance of her having a normal teenage existence.

And then there’s Tim (Ansel Elgort), a star running back who elected to quit the football team in favor of investing his time in online role-playing games. Tim’s interpretation of Carl Sagan’s Pale Blue Dot (a recurring theme throughout the film) is that nothing matters in the grand scheme of things, so why bother investing in a “pointless” activity like football? He’s much more content to form connections with other like-minded individuals in a virtual world, while growing increasingly distant from his father (Dean Norris), who continues to cope with the sudden departure of Tim’s mother the previous year.

If that sounds like a lot to keep track of, you’re correct. As the film progresses, each character is faced with their own individual conflicts, while simultaneously crossing paths with other characters and creating new conflicts along the way. It’s not only gut-wrenching to see how commonplace cruelty has become in today’s digital world, but terrifying to see how broadly we can all be affected by it. Seemingly innocuous decisions turn out to have major, far-reaching consequences, with actions affecting other characters in surprising ways. It’s unapologetically reminiscent of Crash, which admittedly pulled off the same trick in a much more organic fashion that was far more believable.

But that’s not to say that Men, Women and Children doesn’t feel authentic. Having been acquainted with people that have struggled with eating disorders, depression, or poor self esteem, every performance in the film is pitch perfect, and it’s almost frightening how expertly Reitman nails some of these issues. If you’re looking for a film that will send you home with a smile on your face, this one isn’t it. But if you want a thoughtful, genuine depiction of the how far our communication skills and regard for our fellow humans have fallen, look no further.