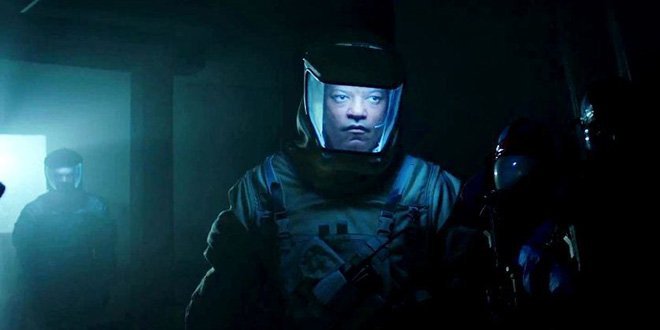 In an age where astronomical budgets and A-list stars dominate the sci-fi genre, it’s seldom that you stumble across a film that strives to present a unique vision, which is precisely why The Signal is such a breath of fresh air. Directed by Will Eubank (who co-wrote the screenplay), the film follows a trio of MIT students on a cross-country trip, who decide to take a detour in order to track down and expose a malicious hacker.

Arriving at their destination, Nic (Brenton Thwaites) and Jonah (Beau Knapp) find nothing but an abandoned, dilapidated structure. Haley (Olivia Cooke) elects to stay behind as the guys explore the grounds, and just as they stumble across evidence that they’re on the right track, all hell breaks loose.

Sometime later, Nic awakens with no memory of the previous events and finds himself trapped in a sterile, hospital-like facility, with Haley in a coma and Jonah held in an adjacent cell. His only point of contact is Damon (Laurence Fishburne), the facility’s mysterious administrator, who dons a Hazmat suit for every interaction. Damon wants to know everything about “the signal” – how Nic found it, when he first discovered it – but Nic’s only concern is getting himself and his companions to safety.

It’s nearly impossible to reveal anything more about the plot without wandering into spoiler territory, but rest assured that The Signal does a spectacular job of approaching familiar sci-fi tropes from a completely different perspective. Eubank spent eight years as a cinematographer, and his experience behind the camera combined with his indie-film sensibilities allow him to get a tremendous amount of mileage out of The Signal‘s $4 million budget.

The pacing is slow and methodical, doling out information in carefully measured doses before opening the floodgates during the film’s climax. There are some truly breathtaking visuals here, particularly during the third act, with one jaw-dropping shot after another building toward a startling mindfuck of a conclusion. If you’re tired of seeing Hollywood continually rehashing the same boring sci-fi stories with new faces and bigger budgets, then track down The Signal and buy yourself a ticket. You won’t be sorry.