Interview: ‘The Signal’ Director Will Eubank On Cost-Effective Storytelling 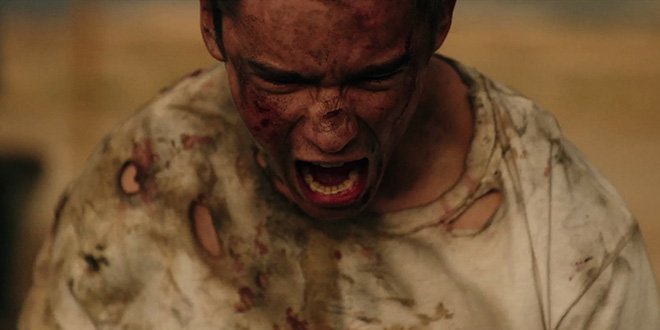 Sitting across the table from me in a conference room at the Hotel Valley Ho in Scottsdale, Arizona, you would never know that Will Eubank is in the midst of a whirlwind promotional tour for the release of his low budget sci-fi flick, The Signal. Full of energy and enthusiasm, Eubank talks a mile a minute about the Sundance hit that’s poised for its theatrical debut, praising the cast and answering plenty of questions about the film’s mysteries – most of which we have elected not to publish in order to keep a tight lid on spoilers.

For now, enjoy the things that we can reveal, and head out to your local multiplex this weekend to catch The Signal.

Where did the idea for this film come from?

David [Frigerio] was getting in my ear a lot as I was finishing my first film, and we share a lot of the same interests, like The Twilight Zone and stuff like that. And we hatched an idea for the ending. It definitely wasn’t what the movie is now, but we had this big concept that we wanted to figure out a way to work backward from.

We brought my little brother on board, and we started trying to engineer a way to get to that ending, but to do it in the smallest way possible, like the most organic and unconventional way. So that by the time you got there, you felt like you had started this ride at five miles per hour, and you ended at 200 or 300.

One thing I really appreciated was the pacing of the film. There’s so much information that you relay, but it’s done at a very slow pace, and the audience is never really able to get ahead of the film and figure it out. Was that a conscious decision to try and stay a few steps ahead of the audience?

For sure. I have a terrific editor, Brian Berdan, and he has a very different lens than the way I see things. I see things a certain way, and he sees things a certain way, and it’s always very interesting to see how he’s paced something. He’s a terrific comrade when it comes down to pacing things. I don’t pretend to be a good editor, because I’m really not.

But in terms of narratively giving things away, I always feel like if I’m slightly confused as the creator of something, I want to just barely ride the edge of what I think is revealing the right amount at the right time. That’s kind of my gauge of what’s entertaining and what’s too slow, what’s going to keep people guessing. And I hope it works, I hope people dig it.

Another stylistic choice I liked was that during the flashbacks, the color palettes are so much more vibrant and vivid, and then everything in the hospital is clean and sterile, and everything in the desert looks drab. Were those choices meant to convey specific emotions?

For the most part, any real solid memory that sticks in your head is pretty powerful, and I think that color is a good way to boost that and make it important. That’s why the start of the movie is so colorful, it’s young love and they have a whole future. The future is a little uneasy because of what Nic is going through, but still, it’s something I identify my younger life with. My best memories are always colorful, and they stick in my head that way.

Speaking of what Nic is going through, the film never expressly tells the viewer what happened, how he came to be in this condition. Why did you choose to be ambiguous about that?

I think, honestly, because I know friends that have these sort of problems or issues, and they’re not defined by those things. It’s a part of who they are, inherently, and does cause them to make certain decisions, but they don’t let people define them by it. That’s why I open the film the way I do, so that you understand it’s a part of him, but it doesn’t define him.

Most of the cast is comprised of up-and-coming performers, but then you have Laurence Fishburne, who carries a tremendous amount of gravitas. How did he get involved?

This was my first movie where I’ve had a casting agent, and Venus Kanani and Mary Vernieu put a lot of talented people on the table. I had originally written the character to be a little Anton Chigur from No Country For Old Men, just flat-faced and oddly stoic. But to get Laurence? I would have never imagined we would have gotten him. As a filmmaker, I’m so lucky, and he ended up being such a nice guy and so collaborative, and he brought so much to that character.

You shot this film for less than $4 million, but there are plenty of shots, especially during the third act, that look incredibly expensive. What techniques did you use to get the most out of your budget?

I’m really into building practical things, so I started testing a lot of things early. And I made a really clean, clear blueprint of exactly what I was going to do, and I really had no wiggle room, and I just followed that blueprint with the visual effects guys to make sure I was delivering. And there are so many little things, like if you shake the camera, it’s going to be this much more expensive. So I was really clear and concise about how I shot certain things so they could be done in an economical way.

And at the same time, a lot of these bigger moments that use slo-mo, those are economical choices as well. I’m only doing it because it saves a lot of money. I don’t have the setups to do tons of crazy action, so how do you make something feel powerful and emotional? It gets the job done, and it still feels riveting, even if you didn’t have the same tools as Transformers.

The Signal is currently playing in theaters everywhere. Check your local listings for showtimes and availability.