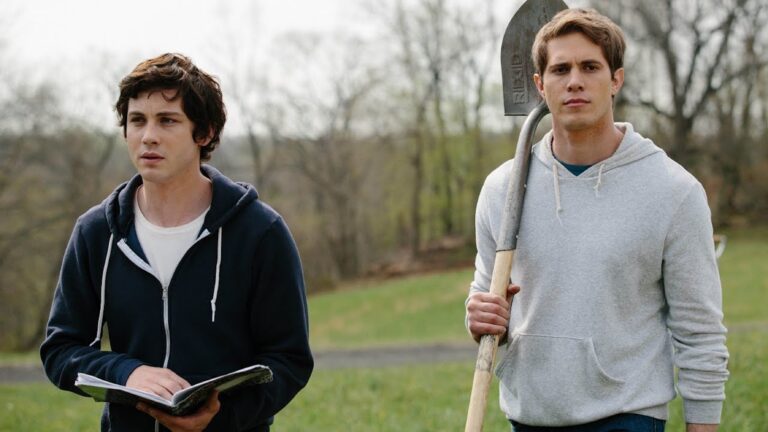 “What about Hunter S. Thompson or David Foster Wallace?” he grouses to the school newspaper’s editor in chief (Yahya Abdul-Mateen II), who serves as something of a mentor and confidant. It’s clear that Sidney believes his writing talent is on another plane entirely, and before long we learn that he’s correct: we flash forward to Sidney in his mid-20s, a successful author whose first novel resonates with disaffected youth in ways that invite comparisons to Catcher in the Rye.

But much like JD Salinger, Sidney is ill-prepared for the trappings of fame and the constant attention thrust upon him, and by his mid-30s he’s completely removed from society, wandering the country with a knapsack, a hound dog, and one of the worst fake beards ever committed to celluloid. He’s also developed a bizarre habit of wandering into bookstores, gathering up all copies of his works, and setting them on fire, an act that finds a mysterious stranger (Kyle Chandler) hot on his trail, hoping to discover the truth behind the celebrated author’s mysterious disappearance.

Thanks to the film’s non-linear editing, which finds us constantly shifting between the various stages of Sidney’s life, it’s difficult to become invested in the events which give rise to Sidney’s fame and ultimately lead to his downfall. Numerous “secrets” are held back until the third act, many of them being revealed long after the audience has already pieced things together on their own, and nearly every character is woefully underdeveloped. As the central subject, Sidney is given the most depth, but becomes increasingly more difficult to empathize with as we learn that his fame was built by exploiting a tragic event from his hometown, or that he routinely cheats on his wife, Melody (Elle Fanning) with his editor’s daughter (Margaret Qualley).

In short, Sidney Hall is kind of a dick, and by the midpoint of the film we’ve long since lost interest in learning how he went from renowned author to bearded, rail-riding hobo – a series of events that were ultimately brought about by his own selfishness, and which led to unspeakable suffering for those around him. The only character in possession of a personality is Chandler’s “searcher,” a kind-eyed and soft-spoken sleuth who turns out to be harboring yet another secret – but at least this one lands as a genuine surprise. It’s too bad that so little of the film is spent with him, as it would likely have been far more compelling to learn why a guy like this is so fascinated by someone with so few redeeming qualities.

Directed by Shawn Christensen from a screenplay he co-wrote with Jason Dolan, The Vanishing of Sidney Hall meanders its way through an excruciating two hours, and seeing the film through to completion is like an exercise in self-flaggelation. It’s neither enjoyable nor particularly interesting, and the biggest tragedy comes not from the events of the narrative, but rather from the amount of talent that goes to waste here.

This story of a JD Salinger-esque novelist who drops off the map at the height of his fame is rife with tragic events, but none so tragic as the squandering of its talented cast on such bland material.