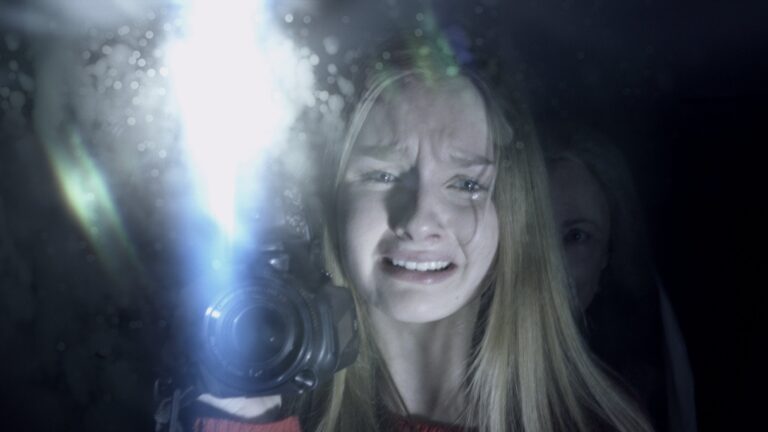 What can be said about M. Night Shyamalan that hasn’t already? Most people would agree that his earliest films (The Sixth Sense and Unbreakable) were great while almost everything he’s made since (Lady in the Water, The Happening, The Last Airbender, and After Earth) has been awful. The Visit is full of numerous trademarks we’ve come to expect from Shyamalan, such as uncomfortable dialogue, awkward moments that seem pointless, and a tacked-on message. Unlike Shyamalan’s previously films, though, The Visit doesn’t come off as unintentionally hilarious. You often get the sense Shyamalan is trying to make us laugh this time and he surprisingly succeeds in a welcome return to competence.

Olivia DeJonge plays Becca, a precocious fifteen-year-old girl who talks more like a cartoon character out of The New Yorker. She’s an aspiring director who decides to make a documentary about a visit to the home of her estranged grandparents. Yep, it’s another found footage movie, but the shaky cam is fortunately much more restrained here than in The Blair Witch Project. Joining Becca on this trip is her younger brother Tyler, played by Ed Oxenbould of Alexander and the Terrible, Horrible, No Good, Very Bad Day. He’s a wannabe rapper who curses the names of pop singers rather than swearing with four-letter words. Um… that’s weird, but whatever.

Upon arriving, Nana (Deanna Dunagan) and Pop Pop (Peter McRobbie) seem perfectly nice. As the week goes by, though, the kids realize that something isn’t right with their grandparents. In the daytime, they attack random strangers, ask Becca to get inside the oven, and just generally act bonkers. They then go completely insane after 9:30 pm when the children are sent to bed. The entire movie is almost like that one infamous sequence from The Happening with the crazy old lady played by Betty Buckley, but The Visit is much more self-aware.

Shyamalan’s movies have been known for trying to seem profound and important, which ultimately results in them just sounding dumb and boring. In The Visit, Shyamalan seems to be acknowledging that he’s taken himself too seriously in the past and decides to simply have a little fun. You’re not always sure if Shyamalan set out to make a horror movie with a comedy element or a comedy movie with a horror element. For the first time, however, you do get the impression that Shyamalan is in on the joke.

Silliness aside, does The Visit work as a thriller too? While you’ll find yourself laughing throughout much of it, the film also possesses a genuine sense of dread. You’re constantly left wondering exactly how unhinged these people are and where the story will go. It amounts to one of Shyamalan’s best twists, which actually adds up and leaves you legitimately chilled. Shyamalan creates an unnerving atmosphere and never allows the found footage approach to become gimmicky. Even if he recycles a few jump scares we’ve seen from him before, they get the job done nonetheless.

The absolute best aspect of the film is its performances, which is a true blessing considering how Shyamalan previously sucked the talent out of Mark Wahlberg and Will Smith. The actors all hit just the right notes here, particularly the gifted young DeJonge and Oxenbould. The dialogue they’re given to work with doesn’t sound natural in the slightest, but they do create characters that are funny, likable, and share an identifiable sibling bond. Dunagan and McRobbie meanwhile have a good time letting all their crazy out. We also get some effective work from Kathryn Hahn as Becca and Tyler’s loving single mother, who had a falling out with her parents for reasons unknown.

The Visit isn’t the most focused film Shyamalan has ever made. If anything, it’s schizophrenic, but that oddly works to the movie’s advantage given the insanity and uncomfortable nature of its supposed antagonists. For the most part, Shyamalan does keep the focus on what’s most important: our connection to the characters. We truly fear for Becca and Tyler’s safety, wanting to see them overcome this bizarre ordeal. Whether you’re laughing or jumping out of your seat, the emotional investment is always there. The film may not be an instant comeback for Shyamalan, but it does demonstrate he’s at least taking a step back in the right direction.

Funny, chilling, and terrifically acted, The Visit may not be an instant comeback for M. Night Shyamalan, but it does demonstrate he’s at least taking a step back in the right direction.

REVIEW – ‘After Earth’ gives audiences a glimpse of a dull future that we’ve seen before.