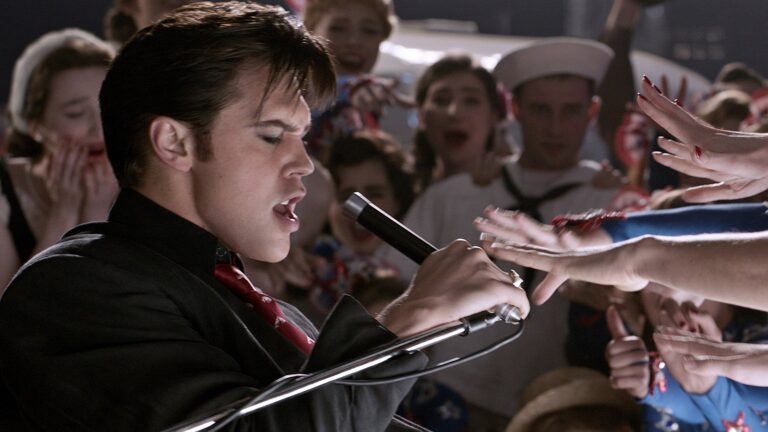 The King of Rock ‘n’ Roll is no stranger to the big screen; in addition to the 31 films that Elvis Presley starred in during his lifetime, he’s been the subject of numerous biopics, documentaries and more than a handful of parodies and satires. The notion of yet another film examining the life and legacy of one of the biggest musical icons in history might elicit little more than a yawn and a shrug from most moviegoers, but filtering the legend through the lens of Australian auteur Baz Luhrmann promises, if nothing else, a level of bombast befitting a king — or in this case, The King.

Right out of the gate, Luhrmann throws a curveball by positioning Presley’s longtime manager, Col. Tom Parker (Tom Hanks), as the narrator — it’s from his perspective that we’ll experience the discovery of a talented young singer from Memphis and watch him blossom into the most recognizable figure on the planet. Buried under layers of latex and sporting a baffling accent of indiscernible origin that in no way resembles the speech of his character’s real-life counterpart, Hanks’ turns in one of the most bizarre (and perhaps misguided) performances of his illustrious career; Elvis wastes little time in establishing Parker’s villainy, including the manipulation and rampant financial abuse to which he subjected his client, but every moment Hanks spends onscreen feels so ludicrous that it’s nearly impossible to regard the Colonel as a legitimate menace.

That said, neither Hanks nor the film’s subject are the true star here — that would be Luhrmann’s brash, maximalist style of filmmaking, a dizzying whirlwind of smash cuts and speed ramping, of anachronistic needle drops and endless montages. Less than 30 minutes into Elvis, I was already exhausted, and the titular rock star hadn’t even been glimpsed onscreen — but when Austin Butler finally arrives, casting a shy glance at the audience from beneath a curl of jet black hair, we immediately feel like something special is about to occur. And boy, does Butler deliver, channeling the King’s dynamic performance style in all its hip-swinging, crotch-thrusting glory (the actor even provided vocals for much of the “young Elvis” musical sequences, and you’d be hard-pressed to tell the difference).

Luhrmann’s penchant for overindulgence extends to Elvis‘ running time, but even at 159 minutes there are countless omissions: Presley’s military service and subsequent Hollywood career are glossed over with a few lines of expository dialogue, and his marriage to Priscilla (Olivia DeJonge) occupies a surprisingly brief amount of screen real estate. Meanwhile, Luhrmann conjures up events that never occurred, such as the singer responding to a local police captain’s directive not to “wiggle so much as a finger” by doing just that — and then some — resulting in a riot breaking out when Elvis is hauled off to jail. The film positions this sequence of events as the impetus for Elvis joining the military and trying to rehabilitate his image; in truth, it was a Jacksonville judge that warned Presley to keep his gyrations under control, and Elvis complied, performing six shows in the city in the summer of 1956 without running afoul of the law (he wouldn’t enlist until two years later).

Yet for all its flaws, Elvis remains a remarkably entertaining experience, the credit for which rests largely with its star. Butler is far and away the strongest element film, and the energy with which he infuses the musical numbers — including picture-perfect depictions of the 1968 “Comeback Special” and the Las Vegas residency that followed soon after — is undeniably electrifying. Offstage, Butler is just as captivating; even when the film’s breakneck pace and unnecessarily flashy editing threaten to overshadow his soulful performance, he shines through it all, capturing a vital part of the King’s essence through his meteoric rise and the tragedy of his downfall.

Movie Review: ‘News of the World’