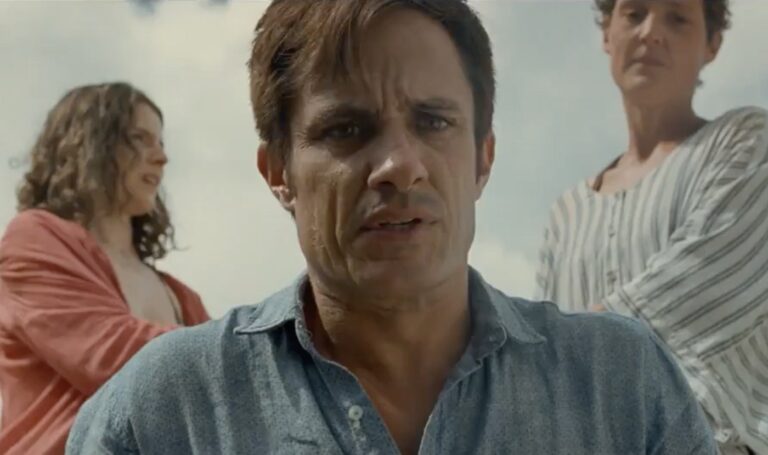 Love him or hate him, the always controversial M. Night Shyamalan’s films certainly seem to get people talking. Other than returning to the Unbreakable and Split universe with Glass, the writer-director has spent the last few years developing and producing various television projects like Servant and Wayward Pines. That all changes with Old, the first new original feature film in a while from the master of the twist that proves to be as frustrating as it is clever.

Old revolves around a small group of families and couples that are whisked away from their vacation resort for a day on a supposedly VIP private beach. Suddenly the beachgoers discover a terrible secret: everyone there is aging at a rapid rate. Every attempt to leave ends with the escapee passing out and to make matters worse, a rapper named Mid-Sized Sedan (Aaron Pierre) was already on the rocky beach with the body of a dead woman.

Shyamalan’s premise and its execution are impressive, creating tension and foreboding dread once the plot eventually kicks in. Unfortunately, Old clocks in at 108 minutes and takes far too long to get to the more fascinating aspects of the aging gimmick. Everything is bleak and humorless until turning into outright horror in the last act. Credit where credit is due though, this is the rare Shyamalan flick that actually sticks the landing with an ending that, in hindsight, improves the rest of the story.

Speaking of the ending, it wouldn’t be a Shyamalan outing without that signature twist finale, which will not be spoiled here. What I will say is that the writer-director hits on a more thoughtful and subtle surprise this time out that enriches the story rather than distracts for the sheer shock value, like one of his more disappointing releases, The Village.

The ending may be strong, but the aforementioned tedium of the first half and some really cheap writing ploys help drag down the overall experience. Don’t expect any proper explanation of the beach’s “magic” because all the film gives the audience is something vague involving magnets. Yep. The plot also conveniently gives the characters the exact information or tools at the perfect moments, coming across as beyond ridiculous.

The cast brings solid work with Gael Garcia Bernal (Y Tu Mama Tambien) putting in a vulnerable, empathetic performance as the patriarch of the main family. Rufus Sewell (The Man in the High Castle) does what he does best: be intimidating and creepy as Charles, the pushy upper class loudmouth with trophy wife Chrystal (Abbey Lee). It’s harder to get to comforable with the kids since the actors and actresses keep getting swapped out, but Thomasin McKenzie (JoJo Rabbit) as the aged-up Maddox is particularly good.

When Old is working, it works extremely well and highlights some of the best aspects of M. Night Shyamalan’s talents. The story is more impressively restrained than most of his recent work, but to the film’s detriment, his weakness is also still on display, leaving the audience with a more thoughtful, but middle-of-the-road return.