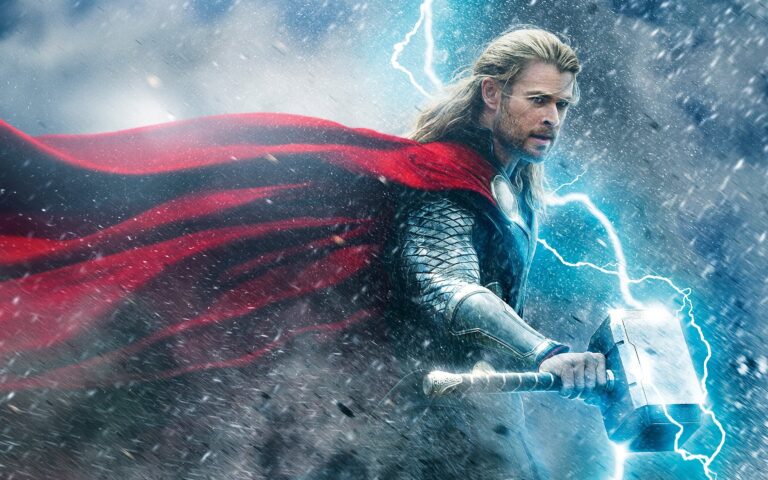 The original Thor was by far the hardest sell for moviegoing audiences during Phase One of Marvel’s cinematic universe, yet it became their most surprising hit. Now Chris Hemsworth is a household name rivaled only by the intense fan love for Tom Hiddleston in the role of Loki, so naturally expectations are noticeably much higher for the inevitable sequel Thor: The Dark World.[pullquote_right]The film improves on the first one in almost every way.[/pullquote_right]

Fans can lay their fears to rest though, as the film improves on the first one in almost every way with a big, loud, and silly sci-fi adventure that is irresistibly fun. From the opening Lord of the Rings-meets-Krypton-from-Man-of-Steel intro, the film packs in so much action and humor that it’s one hour and fifty-two minute runtime feels much shorter.

Marvel’s Phase Two got off to a rocky start with the disappointing Iron Man 3 (my review) but Thor: The Dark World had the luxury of taking the less than perfect rough edges of the world created in Thor and smoothing them into a much slicker visual film with consequences and impact for its characters. The brothers Thor and Loki are still fascinating personalities and their family drama is back on display here.

The aforementioned Malekith and his army of dark elves do not have the most fleshed out motivations, but certainly make for intimidating foes with their gorgeously creepy designs. Odin’s (Anthony Hopkins) narration to the story basically tells us that Malekith wants to suck the light from the “Nine Realms” to usher in the reign of the Dark Elves because, you know, evil. We’re supposed to go on that, but since it’s a comic book movie and the villains make for some great sequences (and there’s still Loki as a villain) it gets a pass.

To the delight or disdain of many, the romance angle is definitely back for round two with Jane Foster (Natalie Portman) and Thor. Jane is still pretty cute with her bubbly crush on Thor (or is it Portman’s on Hemsworth?) but when the story first shifts to Asgard things slow down in a bad way. One scene in particular bordered dangerously close in tone to a certain notorious “romantic” scene in a certain franchise on the lakes of Naboo. [pullquote_right] Sif thankfully spends more time kicking ass than pining after Thor. [/pullquote_right]

Love triangles are a staple of any cinematic romance and Thor: The Dark World has begun to establish their version between Jane, Sif (Jaime Alexander) and Thor in this movie. The actors and script wisely foreshadow the more severe rivalry down the road through small character glances and body language, leaving plenty of room for exploration later. Sif thankfully spends more time kicking ass than pining after Thor.

The look and design of Asgard in the first film always really bothered me (in my mind Asgard should be less a space city and more a medieval realm) but director Alan Taylor (Game of Thrones) took this visual base and created a beautiful hybrid of ancient mountains and castles with futuristic aesthetic and technology. Think the visual jump from Chamber of Secrets to Prisoner of Azkaban in the Harry Potter franchise. Everything simply looks better this time around, from costumes to environments.

Thor: The Dark World is also quite brilliantly insane (more so than even The Avengers) which mostly works in its favor by just letting loose with its creatures and over-the-top scenarios, but things occasionally get out of control. The film has spaceships and castle sieges and monsters and portals and flying gods. It’s fun. But events get so crazy that things start to feel a long way off from the simpler character-driven scenes like getting drunk with Dr. Selvig that made the first Thor so endearing.[pullquote_left]The film badly wants to be The Empire Strikes Back but trips up on its own feet.[/pullquote_left]

Another aspect the movie tries to incorporate with even less success is comedy alongside its adventure, nearly resulting in the destruction of the overall tone of the film. The script has a few great bits but leans heavier on groan inducing one-liners than the few genius comedic Joss Whedon-type moments.

The Warriors Three are constantly trying to have witty “battle banter” but come across more cartoon-ish than normal for these types of films, while over in our realm (Midgard/Earth), Kat Denning’s Darcy went from a cute, small, humorous role in Thor to a bigger, louder, more obnoxious part, killing most of the character’s charm.

[pullquote_right]The stakes are raised, the scope is bigger, the actors are having fun.[/pullquote_right]The film badly wants to be The Empire Strikes Back but trips up on its own feet enough times to fall short of that level of a sequel. But as only the second film in Marvel’s cinematic universe to get a followup thus far, Thor: The Dark World is the first to have a clear cut success (sorry Iron Man 2).

The stakes are raised, the scope is bigger, the actors are having fun and aside from some goofy elements, most everything works in the way it should for Thor: The Dark World. The Marvel Cinematic Universe is becoming one of the most impressive creations in film history and the ride keeps re-inventing itself all along the way.