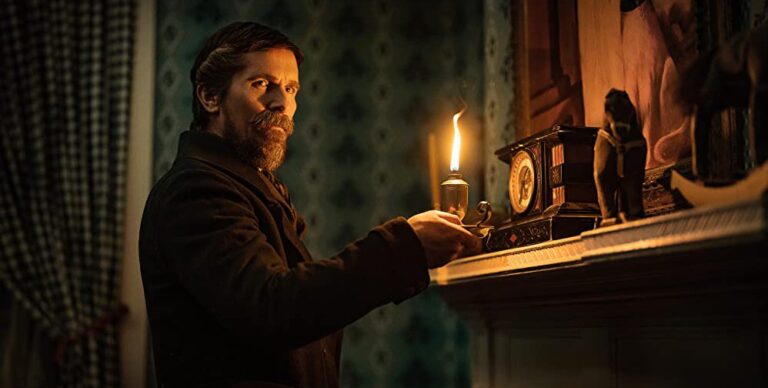 Director Scott Cooper reunites with Christian Bale for a third time in The Pale Blue Eye, which finds the latter cast as Augustus Landor, a retired police constable with a reputation for solving the most inscrutable cases. “Is it true you once solicited a confession with nothing more than a piercing look?” another character asks, and while Landor never quite confirms this legend, he definitely seems like the sort of fellow who would intimidate even the most stalwart of criminals.

When we catch up with Landor in the Hudson Valley circa 1830, his days of piecing together clues are mostly behind him, until the body of a West Point cadet, believed to have committed suicide, is desecrated in the middle of the night, his heart carved from his chest. The top brass at the US Military Academy — including Captain Hitchcock (Simon McBurney) and Colonel Thayer (Timothy Spall) — beseech Landor to track down the madman with all haste, lest the crime reflect poorly on the institution itself, of course. Landor interrogates everyone from the victim’s inner circle to the onsite medical examiner, Dr. Marquis (Toby Jones), but in order to ferret out the truth, he’ll need a man on the inside: enter a young cadet named Edgar Allan Poe, played with delightful eccentricity by Harry Melling.

Bale and Melling have decent enough chemistry as investigative partners, but the investigation at the center of The Pale Blue Eye (or perhaps Cooper’s labored, languishing depiction) proves less than captivating, and that’s before the film introduces several more supporting characters portrayed by the likes of Lucy Boynton, Gillian Anderson and Charlotte Gainsborough — all tremendous performers, and all underutilized here. Even the great Robert Duvall is reduced to a mostly thankless cameo as an exposition-spouting occultist whose contributions to the narrative feel disconnected, mostly because we can’t stop puzzling over the notion of Robert Duvall with a bushy beard and a shock of wild hair, jabbering about witch hunters and immortality.

Adapted by Cooper himself from the 2003 novel by Louis Bayard, The Pale Blue Eye is more serviceable as a gorgeous period piece than a compelling murder mystery. Masanobu Takayanagi’s cinematography is spectacular, and combined with a nerve-jangling score from Howard Shore, the film succeeds in evoking a sense of unease and dread. But atmosphere can only carry you so far, and despite the appeal of another haunted, brooding performance from Bale — often my favorite kind — and memorable work from a show-stealing Melling, the film never quite achieves the potential of its impressive pedigree.