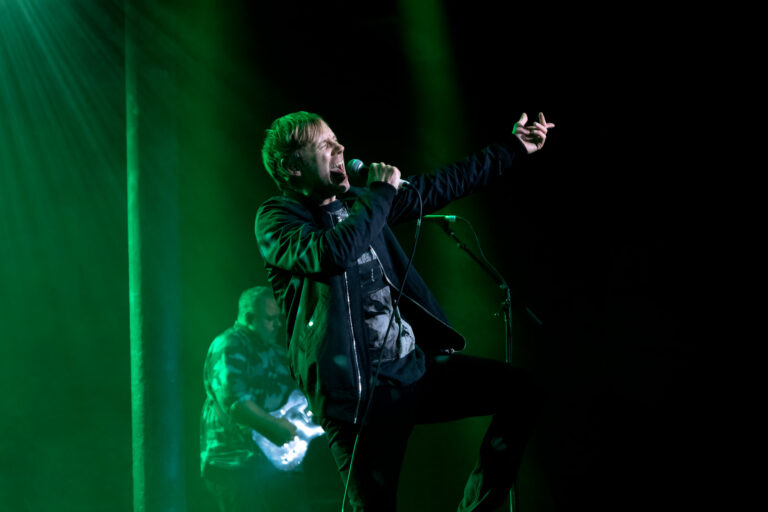 The latter, one of the best-known artists signed to Omaha-based Saddle Creek Records, courted nostalgia with multiple selections from their 2003 release The Ugly Organ, along with a smattering of tunes from their lengthy discography.

Fresh material was on display as well, with the band debuting a new track under the working title “You and What Army.” Frontman Tim Kasher cautioned it was only their second attempt at performing the song in front of an audience — the first run had come about a week prior in the band’s hometown of Omaha — but the track was well-received by the Portland crowd.

Long revered for their intense and energetic live shows, Thursday exploded onto the stage with “For the Workforce, Drowning,” the first track from their beloved 2003 release War All the Time (and a frequent live opener). The 80-minute set was comprised mostly of selections from that record and its predecessor, 2001’s Full Collapse, with a handful of others tunes and even a surprise cover of Texas is the Reason’s “If It’s Here When We Get Back It’s Ours” thrown in for good measure.

Frontman Geoff Rickly led the audience in singalongs to some of the band’s most popular songs, including “Autobiography of a Nation” and “Cross out the Eyes,” and flung himself all over the stage during heavier, faster-paced numbers like “Jet Black New Year” and Thursday’s breakthrough single, “Understanding in a Car Crash.” It was a blistering, exhausting performance, and a perfect showcase for why the band has endured for more than two decades.

Thursday Setlist
For the Workforce, Drowning
The Other Side of the Crash/Over and Out (Of Control)
Cross Out the Eyes
Signals Over the Air
Jet Black New Year
This Song Brought to You by a Falling Bomb
Fast to the End
A Hole in the World
Running From the Rain
Standing on the Edge of Summer
If It’s Here When We Get Back It’s Ours (Texas Is the Reason cover)
Autobiography of a Nation
Understanding in a Car Crash
Division St.
War All the Time