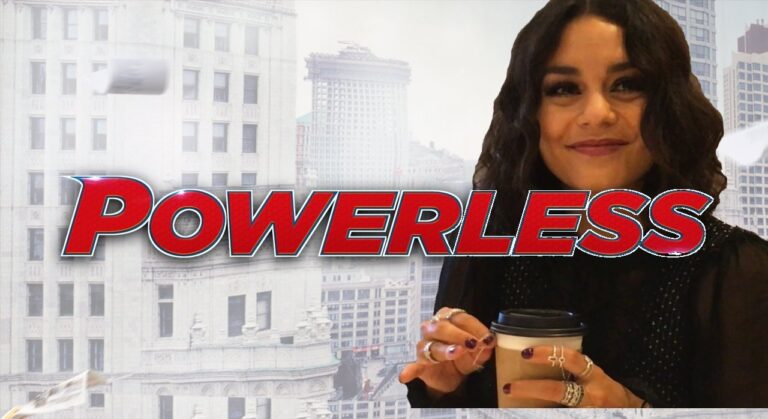 Vanessa Hudgens is tired of superheros – no, not like that, the Spring Breakers actress is starring in the upcoming NBC workplace comedy Powerless set in the DC Comics universe, where her job as an insurance claims adjuster is no easy feat when your world is full of super-powered individuals.

The bubbly actress sat down with us at the press round tables at Comic-Con 2016 to talk about her character Emily and getting to play around in the DC Comics universe within Powerless. You can watch the video via our YouTube page below:

If you haven’t seen the trailer for Powerless on NBC, you might be able to find a version out there on the YouTubes but NBC has yet to release anything official yet – although the footage that is out there is pretty great and has tons of DC references and Easter eggs.

Additionally, the Pilot episode of Powerless was screened at Comic-Con 2016 to mostly positive reviews – unfortunately, we weren’t able to make it over the Warner Bros Television Preview Night event to check it out. The rest of us will have to wait until Powerless gets an solid release date (most likely mid-season), but for now we’ll leave you with the official synopsis of the show:

In the first comedy series set in the universe of DC Comics, Vanessa Hudgens plays Emily, a spunky young insurance adjuster specializing in regular-people coverage against damage caused by the crime-fighting superheroes. But it’s when she stands up to one of these larger-than-life figures (after an epic battle messes with her commute) that she accidentally becomes a cult “hero” in her own right… even if it’s just to her group of lovably quirky coworkers. Now, while she navigates her normal, everyday life against an explosive backdrop, Emily might just discover that being a hero doesn’t always require superpowers.

Powerless will most likely premiere around mid-season on NBC.