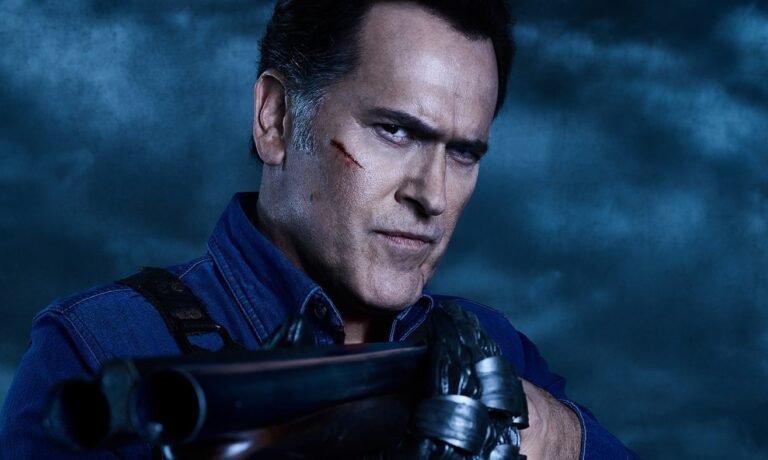 Ash vs Evil Dead Season 2 is just over a month away, premiering exclusively on Starz during the first week of October to kick off Halloween season. Bruce Campbell thinks this is the year the show “sticks” and will connect with audiences around the globe, launching multiple more seasons of the cult favorite series.

We got to sit down with The Chin himself, Bruce Campbell, during the press round tables for Ash vs Evil Dead at Comic-Con 2016, and he had all kinds of insight to give us about the upcoming season and what’s in store for his Deadite-fightin’ crew. You can read the highlights below:

On whether there’s more pressure going into Season 2:

“Yes, because there are expectations. We get through Season 2 alive, we’re good. I have a bold prediction: This is the season that it sticks. You put a show out on the air and it takes a long time to get around the world. They’re selling this around the whole world. It takes a long time to get there. Season 2 comes out and people go, ‘I think I’ve heard of that show’ and they check it out and the more you see it, the more it becomes real in your head.

Like if Starz were to give us Season 3 now, people would go, ‘Oh, this is a real show. Oh, well I’ll start watching it then.’ – that it’s worth investing your time in because sometimes you go, ‘Well I don’t know how long this show is going to last. So why should I watch it?’

Plus people have a list of what they’re bingeing and you have to allow for them to get to your show. We might be in a queue of three, four, five other shows. They’ll get to us, but not right now. So all these networks need to learn how to check the ratings. No one is sitting there live on a Tuesday night at eight o’clock anymore. Nobody.

On the aftermath of the events of the season finale of Ash vs Evil Dead Season 1:

“Ash is living the dream in Jacksonville, Florida! What could possibly go wrong? That’s how we find him. Living the good life.”

On what fans can expect from Season 2:

“Well, this season it gets personal. Ash has to go back home. The Evil Dead, they are like the Mafia, because they hit you where you live. They go after your family. He’s got to go clean up this town of Elk Grove, Michigan, which is why we’re introducing the character of Ash’s father, Brock Williams, played by the great Lee Majors, and Ash’s high school buddy Chet Kaminski, played by Ted Raimi. You know, Ted plays an idiot because he’s so good at it, and I always use Ted because that way my acting looks subtle.”

“Game over, right? Write the check. Check, please! Well, you never know. It’s always the danger of what’s the guy like as a real human? Lee is great because he was on three television shows, each went over a hundred episodes. Big Valley, which was like a hundred years ago – that was his western show, put him on the map, then it’s obviously the classics Six Million Dollar Man and The Fall Guy.

What you get is a guy that’s spent a lot of time on a film set. He doesn’t crap around, he knows what every camera does, he know what’s happening. So none of it’s a mystery to him. He never leaves the set. He wants to rehearse his lines, he memorizes his lines.

Modern actors can honestly get a little lazy. They run back to their trailer, they put their earbuds in, they’re doing whatever they do. Lee just goes and sits in a chair on the corner of the set. Never leaves. It’s like, “Lee, can we get you anything?” and he’s “Na, I’m good.” Because that’s just how he grew up, he grew up on a set.

First two shows he worked on, he lived on the lot. He had an apartment on the backlot. He worked so many horrible hours, you’d just stagger up to your apartment and collapse, wake up the next morning, come down and work all day. I mean, those were different times. So this guy has put in his time. I have a lot respect for him. He’s still sharp as a tack and in [Ash vs Evil Dead] he’s reeeally funny. We have a couple great conversations that have fun little “bionic” hints, I guess you could say.”

On if they upped the amount of blood/gore for Season 2:

“I think we did, because there are more characters to get it this time around. Lee Majors had his first experience with blood and he’s like, “What the hell is this?” You can’t predict what it’s going to be like if you’ve never done it before. I know what it’s like to get slimed, so it’s a big eye-opener that first time you get nailed. But yeah, we had more characters, more opportunities to bloody them all, so we went for it.”

On what he likes about playing Ash:

“Look, Ash is a flawed human and that’s the beauty of it. He’s a very flawed hero. I don’t like heroes that are perfect. That’s snores-ville, man. I’ve turned down hero parts because the bad guy was so much better. I told the producers, “I’ll play the bad guy. I don’t want to play the good guy, because the good guy has shitty lines.” The good guy has lines like this, “Come on!,” “Let’s go!, “Get down! Now!” That doesn’t cut it for me. The bad guy had all these flowery speeches and I was like, “Let me do that,” so they did and I got to watch Robert Culp’s son, Joe Culp, struggle with his shitty dialogue for the whole movie and I’m like, ‘You poor fucker.'”

While you wait for the Season 2 premiere of Ash vs Evil Dead, you should watch the Comic-Con 2016 red band trailer for the show’s sophomore season on STARZ below:

Ash vs Evil Dead Season 2 premieres Oct 2 only on STARZ.