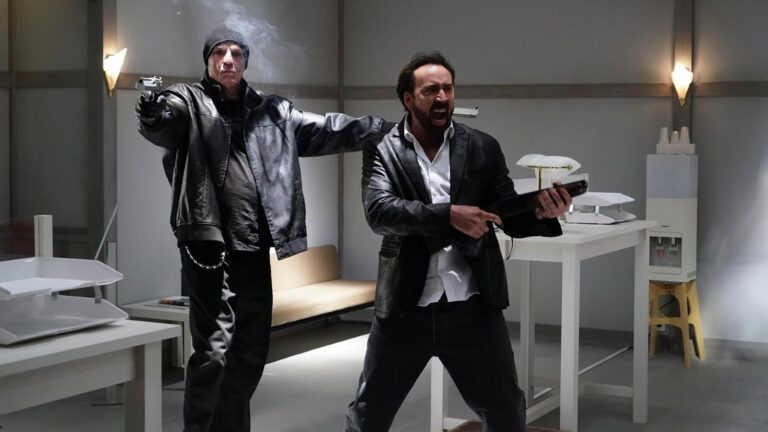 Jesus Christ, where do I even start? Prisoners of the Ghostland, Sion Sono’s first English-language feature (although there’s still a healthy amount of spoken Japanese) is a nearly incomprehensible blend of influences, ideas and tropes, as if an eclectic selection of westerns, samurai films and Mad Max-esque post-apocalyptic adventures were haphazardly smashed together, then blown to shit with high-grade military ordnance — only to have someone attempt to reassemble the pieces into something vaguely coherent. Nothing else in the 2021 Sundance Film Festival lineup comes even remotely close to this level of gleeful insanity.

After the most colorful bank robbery in history — every patron is wearing bright pastel colors, which contrasts wonderfully with the building’s snow white interiors — The Hero (Cage) finds himself incarcerated in Samurai Town, a weirdly effective blend of Eastern and Western influences patrolled by shotgun-toting cowboys in trenchcoats and katana-wielding swordsmen. Paper lanterns line the streets of the red light district, where wooden cages are filled with prostitutes, and The Governor (Bill Mosely, dressed as though he stole Burt Reynolds’ wardrobe from The Dukes of Hazzard) keeps the townsfolk in line with help from his lethal enforcer, Yasujiro (Tak Sakaguchi).

When The Governor’s adopted granddaughter Bernice (Sofia Boutella) escapes into the desert beyond Samurai Town’s border, he yanks The Hero out of his cell and straps him into a black leather jumpsuit — with explosives rigged to the arms, throat and crotch — and gives him three days to track down Bernice before his head and balls are blown to smithereens. The Hero’s journey (heh) will take him into the heart of the Ghostland, whose inhabitants have built a sprawling settlement around an enormous decrepit clock, and live in fear of an irradiated prison escapee (Nick Cassavetes, looking like a muscle-bound Freddy Krueger) and his army of henchmen.

If Prisoners of the Ghostland already sounds bizarre, then wait until you get into some of the more extraneous world-building, such as the mannequin pieces that many of Ghostland’s inhabitants adorn themselves with, or the machinery obsessed “Rat Clan” that scampers about the village, their leader speaking mostly unintelligibly through some kind of voice modulation device. There are countless ideas on display here, with so much weird shit happening at any given moment that it’s virtually impossible to absorb it in a single viewing.

Back in 2018, Cage referred to Prisoners of the Ghostland as “the wildest movie I’ve ever made,” and it’s difficult to argue with that notion. Almost nothing makes any goddamn sense, but everything looks spectacular, the ultra-violent action — especially the climactic swordfight/shootout — is a blast, and Cage is magnificently off the reservation (a monologue which finds him shouting the word “testicle” into the heavens is perfectly on-brand). If you’re in the mood for something unapologetically bizarre, outlandish and just plain fucking bonkers, then check this one out.