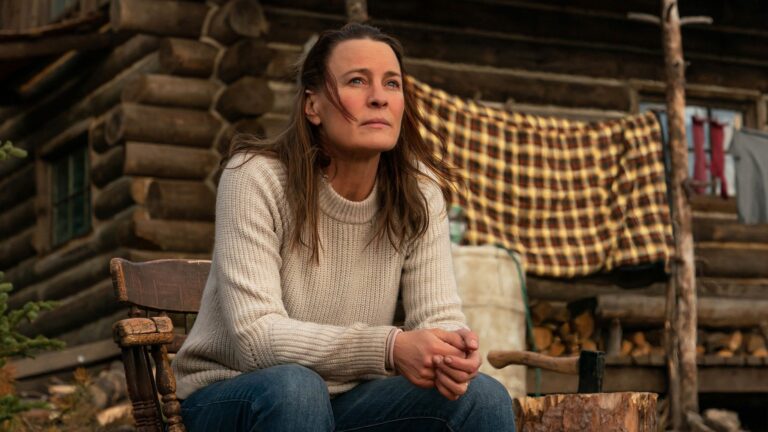 Golden Globe winner Robin Wright is no stranger to stepping behind the camera, having directed multiple episodes of the critically acclaimed Netflix series House of Cards, in which she also starred and served as producer. But Wright’s feature-length directorial debut, Land — premiering at the 2021 Sundance Film Festival — treads very different territory than the seedy political underworld, trading the crowded hallways and chambers of our nation’s capitol for the remote, rugged wilderness of Wyoming.

Wright stars as Edee, whom we first encounter during a therapy session, reeling from an unknown tragedy that has left her feeling isolated. “It’s really difficult to be around people,” she explains. “They just want me to be… better.” When asked if she’s able to share her feelings with someone — such as her sister (Kim Dickens) — Edee is practically aghast at the notion of subjecting others to the pain she feels. “Why would I want to share that?”

So determined is Edee to wall herself off from the rest of humanity that she purchases a tiny patch of land, surrounded by a vast forest and occupied only by a rickety cabin with no electricity or running water. Intent on embracing the solitude and living off the grid, she struggles with daily tasks like chopping wood and catching fish, and spends her nights shivering before a dwindling fire or huddled beneath a mountain of blankets as rain leaks from the ramshackle roof. All the while, Edee is haunted by ghosts of her former life, and as her supplies begin to run out, determination gives way to despair. “It’s not working,” she sobs in frustration.

When Miguel (Demian Bichir) stumbles upon the cabin after a blizzard, he finds Edee cold, weak and starving, barely able to open her eyes. Nursing her back to health with the aid of a nurse (Sarah Dawn Pledge) from a nearby town, Miguel offers to teach Edee how to survive on her own through trapping and hunting, a proposition to which she reluctantly agrees. As the months pass, she progresses from ensnaring rabbits and squirrels to shooting and butchering deer, from picking berries to growing her own food in a makeshift garden. When she asks Miguel why he chose to help her, his matter-of-fact response takes her by surprise: “You were in my path.”

Shot on location in Alberta, Canada, Land is awash in stunningly beautiful scenery. Warm fall colors fade into the grey and white tones of a harsh winter, before bursting back to life with the lush greens and blues of spring, and cinematographer Bobby Bukowski captures it all in exquisitely vivid detail. Not to be outshone by the visuals, both Wright and Bichir are in peak form, with the latter bringing a quiet dignity to his good-natured, salt-of-the-earth hunter, while Wright’s performance runs the gamut from melancholy to hopelessness, to steely resolve and ultimately, hope.

Land revels in little moments of humanity: a shared cup of coffee, a warm bath beneath a starry sky, an off-key rendition of 80s pop hit “Everybody Wants to Rule the World” sung in tandem while enjoying a campfire. Some viewers might expect Edee and Miguel’s cautious friendship to eventually blossom into something more than platonic, but screenwriters Jesse Chatham and Erin Dignam show little interest in the notion, opting instead to explore the different ways in which grief manifests, and the remarkable effects that can result from even the smallest acts of compassion and kindness.