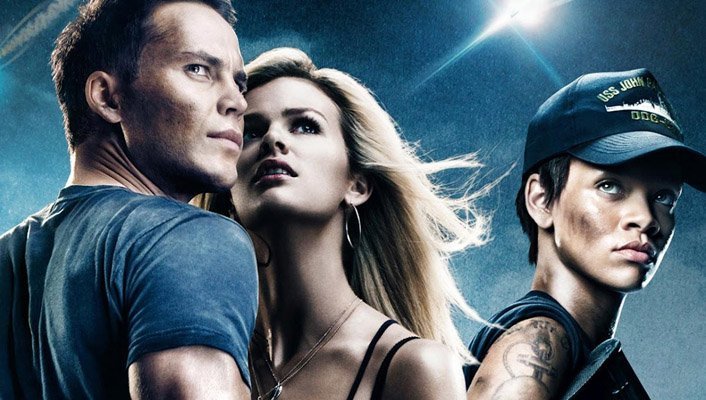 The second Hasbro property to be adapted into a big-budget feature film, Battleship is proof positive that just because Transformers launched a hugely successful film franchise, this does not mean that Hollywood should begin flooding the market with movies based on popular children’s toys. Transformers had the benefit of a rich history told via a long-running animated series and a popular line of comic books. Battleship is a board game. One of these things is not like the other.

[pullquote_left]While the visual effects are astounding, nearly every other component is sub-par.[/pullquote_left]After a lengthy opening sequence that involves our “hero” drunkenly breaking into a convenience store in order to procure a frozen chicken burrito for the attractive blonde he just met at the bar, we jump forward an indeterminable period of time to the present day, where Alex Hopper (Taylor Kitsch, giving exactly the same one-note performance as every other role he’s played) has joined the Navy at the behest of his older brother, Commander Stone Hopper (Alexander Skarsgård) and has established himself as a competent young Lieutenant with a severe attitude problem. After witnessing Alex commit a number of crimes before the film’s title card is displayed, one is immediately forced to ponder how he could possibly have been allowed into the Navy in the first place, but this becomes the first in a long series of unanswered questions.

Meanwhile, after discovering a distant planet that seems capable of supporting and sustaining organic life, scientists construct an elaborate communications array in Hawaii to broadcast a repeating communication signal in hopes of making contact with extraterrestrial life. After eight years with no activity, a response finally arrives in the form of five alien ships speeding toward Earth. One of the ships breaks apart after colliding with a satellite, with the wreckage leveling a Hong Kong skyscraper, while the remaining ships crash into the Pacific Ocean a few hundred miles off the coast of Hawaii, during the first few days of the RIMPAC naval exercises.

Tasked with investigating the disturbance, the brothers Hopper make the unfortunate decision to adopt an aggressive attitude with our new visitors, which results in the elder brother’s Class IIA destroyer being obliterated by a barrage of missiles from the invaders – missiles which just so happen to be shaped like the pegs used in the board game on which the film is based. Out for revenge, John Carter – sorry, Alex Hopper – goes on the attack after learning absolutely nothing from the death of his brother only moments before, and looks on helplessly as a Japanese destroyer providing supporting fire is blown out of the water.

[pullquote_right]Dialogue is poorly delivered, and character development is nonexistent.[/pullquote_right]Unable to contact reinforcements due to a terribly convenient force field the visitors have erected around the Hawaiian islands, and unable to utilize any modern-day weapons technology for the same reason, Tim Riggins – sorry, Alex Hopper – teams up with Captain Nagata (Tadanobu Asano), a badass weapons officer (Rihanna) and the surviving crew members of each ship to launch a counter-attack, paying homage to the film’s board game origins in one of the film’s few well-written scenes.

Back on the island, a boring subplot manifests when the aliens attempt to commandeer the communications array in an effort to establish a link with their homeworld. Despite the presence of a naval base a few miles away, the film expects us to believe that the only people willing or able to even attempt interfering with this plan are Hopper’s physical therapist girlfriend (Brooklyn Decker), a disabled Army veteran with prosthetic legs, and a sniveling, terrified NASA scientist. Realizing that destroying the array is the only way to prevent the alien signal from broadcasting, the trio notifies Hopper and his crew, who return to base and hijack the USS Missouri, a decommissioned WWII battleship that has been preserved as a museum.

With advanced alien technology, elaborate vehicle designs, and catastrophic levels of destruction and chaos, Peter Berg is trying desperately to emulate Transformers director Michael Bay. He even seems to share Bay’s enthusiasm for – and childlike fascination with – the United States military. This isn’t necessarily a bad thing, as it leads to what many will probably consider the best scene in the entire film – a crew of retired war veterans, or “old salts,” resuming their posts and piloting the USS Missouri out to sea to combat an alien invasion. The board game’s famous tag line, when delivered by one of these grizzled old fighters, has more emotional impact than the performances of Rihanna and Kitsch combined.

[pullquote_left]The film runs out of steam long before the end, overstaying its welcome by a solid 30 minutes.[/pullquote_left]While the astounding visual effects in Battleship are certainly worthy of praise, nearly every other component is sub-par. Dialogue is stilted and poorly delivered, character development is nonexistent, and pacing is incredibly inconsistent. As the disapproving father of Hopper’s love interest, Liam Neeson isn’t given much to do aside from barking the occasional order or scowling at his daughter’s beau, and he (along with the entire romance angle) could easily have been excised from the final cut without any damage being done to the film’s narrative.

At two hours and change, Battleship overstays its welcome by a solid 30 minutes. With better dialogue, a different cast, and a tighter narrative, this could easily have been an enjoyable popcorn flick. Unfortunately, the film runs out of steam long before the engines of the USS Missouri are fired up, and audiences will find themselves as worn out and beaten down as the old salts on deck.