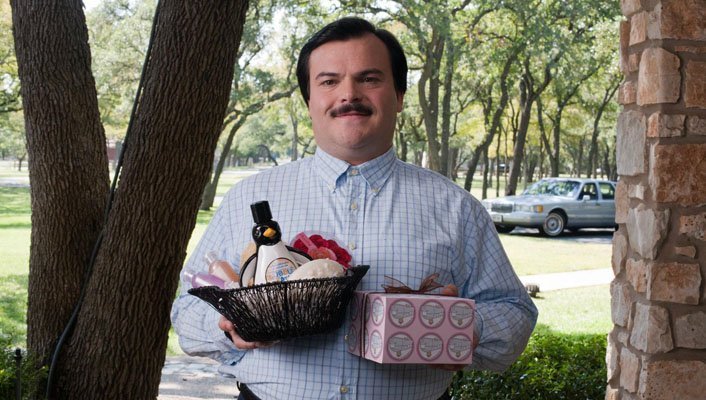 Kind, compassionate funeral director Bernie Tiede (Jack Black) is one of the most well-known and well-respected citizens in the small town of Carthage, Texas. He’s incredibly generous and thoughtful, and never has a bad word to say about anyone – not even Marjorie Nugent (Shirley MacLaine), the cantankerous widow of a local millionaire.

[pullquote_left]An absurdly dark comedy, and a bizarre portrait of small-town America.[/pullquote_left]Bernie and Marjorie establish an unlikely friendship, vacationing all over the world and quickly becoming the talk of the town. Estranged from her family members and with no friends to speak of, Marjorie has no one to rely on except Bernie, but their relationship becomes strained when she begins to monopolize his time, displaying jealousy whenever he’s away. With accusations, temper tantrums, and passive-aggressive behavior piling up, Bernie lashes out unexpectedly, putting the old hag out of her misery once and for all.

Unable to face the truth of the horrific deed, Bernie covers up the facts from the locals and goes about his business as though nothing is wrong, but the local D.A. (Matthew McConaughey) and Marjorie’s snoopy stockbroker begins to sense that something might be amiss. When the truth comes out, the response from the townspeople is almost as surprising and shocking as the crime itself.

[pullquote_right]Black gives a wonderfully understated performance, and MacLaine is delightful.[/pullquote_right]Black gives a wonderfully understated performance as the big-hearted mortician, proving once again that he is capable of much more than the one-note roles he usually finds himself saddled with. MacLaine is delightful as the cranky shut-in with the chip on her shoulder, and McConaughey, though used sparingly, is still mesmerizing in a courtroom setting.

With Bernie, director Richard Linklater has put together an absurdly dark comedy that also serves as a bizarre portrait of small-town America. The narrative is littered with interview segments featuring real-life residents of rural Texas, which provide amusing insight into the true events which inspired the film. You won’t find many belly laughs here, but there’s plenty of awkward humor to keep the film rolling along at a brisk pace.