[REVIEW] “Don’t Be Afraid of the Dark” is aptly titled. 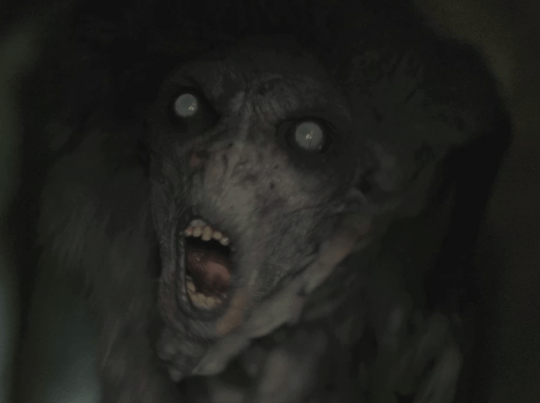 Before we begin, allow me to say that I’m a tremendous fan of Guillermo Del Toro.  He’s a creative genius with an unmatched passion for the art of filmmaking, and it’s rare that I find myself disappointed in a piece of work that he’s involved in.  Unfortunately, Don’t Be Afraid of the Dark turned out to be one of those rare exceptions.

After a disturbingly grisly opening sequence, the film introduces us to architect Alex (Guy Pearce) and interior designer Kim (Katie Holmes), who are working to restore the ancient Rhode Island mansion of revered painter Emerson Blackwood.  Alex’s daughter, Sally (Bailee Madison) has just been sent to live with the couple, and she finds difficulty adjusting to life with her preoccupied, workaholic father and his new girlfriend.  An exploratory trip around the mansion’s grounds leads to the discovery of a hidden basement inside the house, and Sally begins to hear voices from inside a mysterious furnace grate, begging to be set free.

It doesn’t take long for Sally to realize that opening the grate was a pretty big mistake.  The voices belong to malevolent, demonic little creatures that begin to wreak havoc on the household, and who have very sinister intentions for their new playmate.  Sally desperately tries to warn her father, but finds herself saddled with a child psychologist and a prescription for sleep medication for her troubles.  It’s not until a terrible injury befalls the grizzled old caretaker that Kim begins to suspect something might be amiss, leading her to investigate the circumstances surrounding the previous owner’s disappearance.

Visually, the film impresses at nearly every turn.  The architecture of the old mansion is superb, and coupled with the lighting design makes for some very interesting set pieces.  The creatures are reminiscent of the fairies in Pan’s Labyrinth, and 80s horror fans will no doubt notice some similarities to the demons in The Gate.  The audio design is also top-notch, and the frantic whispers of the creatures are used to great effect in surround sound.

The script, however, turns out to be the film’s biggest stumbling block.  Del Toro adapted the story from a 1973 made-for-TV film that is often hailed as “the scariest movie ever made,” but it seems as though he forgot to include any of the scares from the original.  There was never a time that I felt the slightest concern for any of the characters, which can probably be attributed to the fact that none of them are fleshed out well enough that the audience can relate to them.  I also found our heroine to be so bitter and unlikable that I nearly caught myself hoping the creatures would finally get their hands on her, just so I could stop listening to her complain.  And speaking of the creatures – that particular reveal comes far too early.  They seemed so much more sinister scuttling around in the shadows, offering only fleeting glimpses, and I think the filmmakers could have built a lot more suspense by keeping them shrouded in mystique until much closer to the finale.

Don’t Be Afraid of the Dark is a very interesting film, visually arresting and well-conceived.  Unfortunately, the execution leaves much to be desired, as the film gets bogged down with under-developed characters, poor pacing, and a distinct lack of the thrills and chills that a horror movie needs.  I won’t say that I didn’t enjoy it, but I’ll certainly say that I wasn’t afraid.