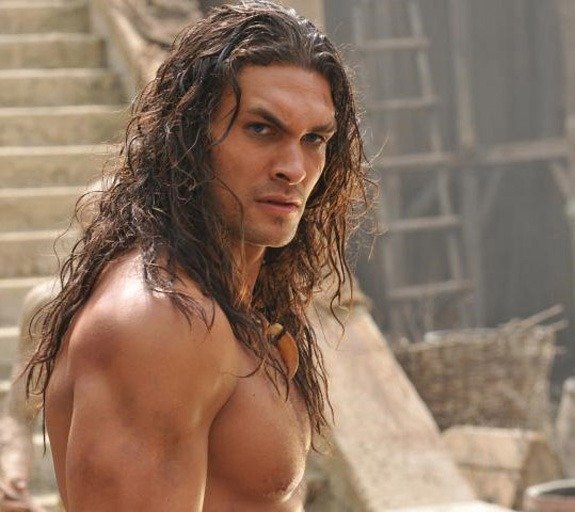 It’s not often that I exit a theater with the sense that I have completely wasted the last two hours of my life, but such was the case with Marcus Nispel’s reboot of Conan the Barbarian.  While I’ll admit to showing up with low expectations, I don’t think anything could have prepared me for how truly, truly terrible this film was.

Conan is born amidst a vicious battle between the Cimmerians and… well, the film is never quite clear on that particular detail.  His father, Corin (Ron Pearlman in a completely lifeless performance), cuts Conan from his mother’s belly so that she’ll have the opportunity to behold her son before she perishes.  As she shuffles off this mortal coil (and the audience considers shuffling off to the concession stand), Corin holds his newborn son aloft and roars at the heavens (this is the first of many sequences featuring characters screaming nonsensically at the sky while holding an object over their heads).

Fast forward to Conan’s adolescent years, as he longs to become a Cimmerian warrior.  While competing in a trial against the other boys in the village, Conan is besieged by a small band of warriors from what we should probably assume is a warring faction – again, this is never really explained.  The teenage Conan (Leo Howard, who also played young Snake Eyes in G.I. Joe and is far more interesting in his 15 minutes of screen time than anything else that happens during the course of the film) effortlessly defeats five adult, experienced fighters in a preposterous but entertaining action sequence, and returns to the village brandishing their heads.

It’s not long before the Cimmerians find themselves under attack… again.. this time by Khalar Zym (Stephen Lang), who seeks the final piece of an ancient mask that is said to hold incredible power.  Of course, Conan’s father is protecting this piece of the mask, and of course his father must die and the village must be razed in order to move the plot forward and give Conan something to do besides standing around and scowling.

We jump forward again, and Conan (Jason Momoa) has wandered the globe in search of the warlord that destroyed his village.  He learns that Zym seeks a “pureblood” in order to activate the power of the mask.  In keeping with the theme of this film, we never learn exactly what being a pureblood entails, or how it relates to the mask, but that’s okay, right?  Of course it is.  Who needs a coherent plot when there are bodies being torn asunder and bare-breasted slave girls fleeing for their lives?

We then descend merrily into a series of seemingly disconnected action sequences wherein Conan and the pureblood, Tamara (Rachel Nichols) narrowly escape danger, argue, narrowly escape danger again, argue some more, sleep together, become separated, etc.  The third act of the film is Epic Action Movie 101, and by the time the credits rolled I was completely disgusted with the lack of imagination being displayed onscreen.

Jason Momoa, who was interesting and charismatic on Game of Thrones, certainly looks the part, and he shines in the action sequences.  Unfortunately, his performance is crippled by the horrendous writing, as he tries desperately to keep a straight face while delivering lines such as “I live… I love… I slay.  And I am content.”

Stephen Lang’s villainous Zym is likewise saddled with such gems as “Babarian… I don’t think I like you anymore,” spat out whilst he and our hero are engaged in a pitched battle over a pit of lava.

Rachel Nichols is completely underutilized and underdeveloped in this film, and the same can be said for Rose McGowan, who portrays Zym’s daughter, the sorceress Malique.

A movie like Conan the Barbarian should feature some truly epic battle sequences, but with the notable exceptions of the aforementioned scene featuring young Conan, and an interesting battle involving warriors made out of sand, everything else feels disjointed, and the extreme-close-up-shaky-cam footage combined with a ludicrous amount of gore gets stale very, very quickly.  And seriously, do we really need 47 shots of Conan thrusting his sword into the earth and kneeling?

I’ll give credit where credit is due – the backgrounds and environments do an excellent job of establishing the mythical world in which Conan takes place.  It’s just a shame that everything and everyone populating that world is completely devoid of any of the elements which make up an enjoyable film.

I watch… I cringe… I fall asleep.  I am not content.