[REVIEW] “Footloose” remake dances to the same beat… but we don’t mind. 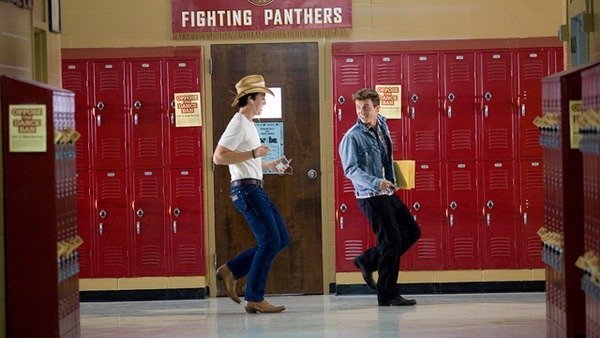 I’ll be honest – I was completely against this idea as soon as I heard about it.  The original Footloose is one of the most beloved films of my youth, and the idea of someone trying to modernize it just seemed like another attempt by Hollywood to cash in on a well-known name from the past.  But despite my reservations, I went into the film with an open mind, and walked away pleasantly surprised by the experience.

After his mother succumbs to a long battle with leukemia, Boston native Ren McCormack (Kenny Wormald) leaves the city life behind and moves to Bomont, a close-knit little farm community where everyone known everyone else.  His aunt and uncle take him in, setting him up with a car and a job, but no one tells him about the town’s history, and the guidelines he’s expected to follow.

It seems that three years before Ren’s arrival, a group of teenagers were coming home late from a party when they were killed in a horrific car crash, a tragedy that still haunts the town and its patriarch, Reverend Shaw Moore (Dennis Quaid).  Moore’s son was behind the wheel of the car, and the devastating effect on the community and the congregation led him to pursue the passage of several laws designed to protect the town’s remaining children.  These laws include a strongly-enforced curfew, a prohibition of loud music, and a ban on public dancing.

Unfortunately, the Reverend Moore is so focused on taking care of everyone else’s children that he continually neglects his remaining daughter, Ariel (Julianne Hough), whose behavior and attitude run the risk of alienating her closest friends.  This is a girl that’s trying so desperately to be seen and heard, and despite her best efforts, no one notices except for the new kid in town.  Ren’s interest immediately puts him at odds with Ariel’s father, as well as her abusive race car-driving boyfriend from the next town over.  Ren’s frustrations soon lead him to organize a grass-roots campaign to abolish the law against public dancing, and to allow the teenagers of Bomont an opportunity to enjoy their youth.

Although I love John Lithgow’s portrayal of Reverend Moore in the original film, Quaid breathes new life into the role, creating a character with more more depth than his 1984 counterpart.  He is so lost, so unhappy, and the only thing that keeps him moving forward is the sense of duty he feels toward his community.  He’s broken, beaten down, and so blind to the mistakes he continues to make that you can’t help but feel some sympathy.

The choice to cast professional dancers in the lead roles is one of the best decisions made by the filmmakers.  Wormald has a captivating presence, and whether he’s blowing off steam in an empty warehouse or strutting his stuff on the dance floor of a honky-tonk, this kid can move.  Hough fares just as well as Ariel, and the chemistry between her and Wormald, both on the dance floor and off, is electric.

After enjoying his previous efforts (Hustle and Flow, Black Snake Moan), Footloose reinforces my belief that no one makes more effective use of music in his films than director Craig Brewer.  Alongside that music, choreographer Jamal Sims gives the cast plenty of opportunities to showcase their talents, making every dance sequence feel unique and different.  Brewer and his team have done a remarkable job of paying homage to the 1984 film, staying true to the original vision while tweaking it just enough to make it feel new and accessible to a modern audience.