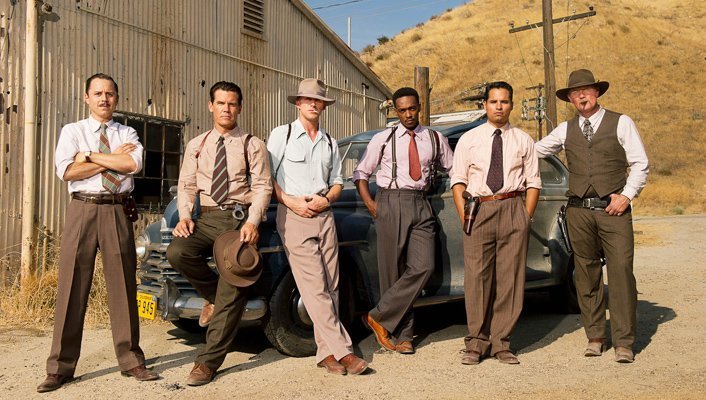 The rampant corruption that plagued the LAPD during the late 1940s and early 1950s has already been explored onscreen in such films as Mulholland Falls and L.A. Confidential, but director Ruben Fleischer eschews the somber tone of those films in favor of a pulpy, melodramatic approach in Gangster Squad, the story of a ragtag assembly of detectives waging a personal war on boxer-turned-crime boss Mickey Cohen (Sean Penn).

Leading the charge is John O’Mara (Josh Brolin), a square-jawed Dick Tracy sort of cop with a pregnant wife and an incorruptible sense of honor and duty. He’s backed by longtime friend and fellow war veteran Jerry Wooters (Ryan Gosling), whose interest in ridding the city of Cohen’s influence plays second fiddle to his interest in Cohen’s girl (Emma Stone), who may or may not be playing one against the other.

The film looks gorgeous, with incredible production design and impressive costumes that believably recreate the era, and Sean Penn steals nearly every scene with his sinister portrayal of the legendary gangster. The remaining key players do their best, as does a supporting cast that consists of Anthony Mackie, Robert Patrick, Giovanni Ribisi and Michael Pena, but Will Beall’s screenplay (adapted from the nonfiction book by Paul Lieberman) is more concerned with spitting out one-liners than developing characters.

Fleischer brings to the table the same blend of action and humor that made Zombieland such a hit – unfortunately, it’s less effective here, as the film careens from shootout to explosion to car chase and back again, with little time for subtlety or nuance. There’s a great movie buried in here somewhere, but the reliance on spectacle over substance leaves us with an experience that’s just pretty good – enjoyable, but instantly forgettable.