REVIEW – Arnold barely keeps ‘The Last Stand’ on its feet. 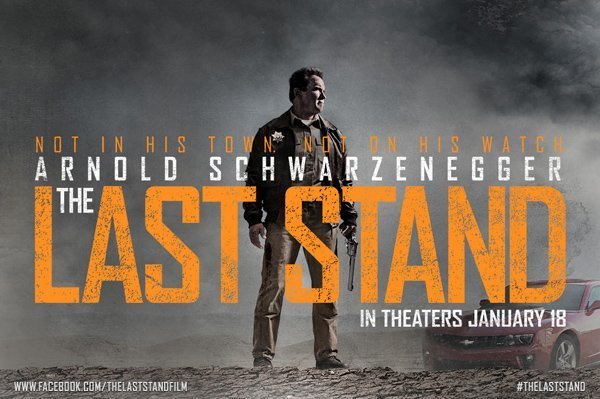 Arnold is getting old. It’s not an insult or an assault on his talent or charisma, but a fact of nature that even the marketing of his latest film The Last Stand agrees upon. They make it clear he’s getting up there in every commercial, playing up the Danny Glover “I’m getting too old for this shit”  laughs whenever possible. But many action stars have been able to transition successfully in the twilight of their career and adapt to embrace their age (see Eastwood, Connery, and Stallone). The Governator will have to choose his roles more wisely going forward to reach that caliber, because The Last Stand feels a bit lazy as a sometimes entertaining, but overall lackluster throwback to 80’s/90’s action flicks.

The Last Stand is set in my lovable state of Arizona and I sat down in our screening surrounded by law enforcement men and women – including the notorious Sheriff Joe Arpaio himself, one row in front of me. They were all invited in a nice gesture to view the tale of a motley crew of police officers led by their Sheriff Ray Owens (Schwarzenegger) defending their small border town from an escaped drug kingpin and his lackeys, whom are trying to flee to freedom in Mexico.

The film works on some basic levels, and director Kim Jee-Woon wisely balances out the film with an ensemble supporting cast and an ample amount of humor, the latter of which is very important because this movie is utterly ridiculous in its logic jumps, corny dialogue, and action film clichés. Things move pretty slowly in the early parts of The Last Stand, with the heroes not even getting in on the action until almost 40 minutes into the movie. Most of the early sequence revolve around drug lord Gabriel Cortez’s (Eduardo Noriega) escape and race to the border in his stolen Corvette ZR1 super car, which can do implausible things that would make even the Batmobile jealous, while the Sheriff and his deputies putter around and talk about how their town is quiet and boring.

Arnold is obviously a bit rusty and his line delivery, never a strong point to begin with, seems as bad as ever – almost unintelligible in some scenes. Smartly, the film surrounds him with entertaining sidekicks in Luis Guzman, Johnny Knoxville, Zach Gilford (Friday Night Lights) and Jaime Alexander (Thor) that keep most of Arnold’s lines to one sentence at a time, while keeping things light-hearted and fun. And on the opposite side Peter Stormare (Armageddon, Prison Break) leads Cortez’s men and hilariously chews the scenery as always, with his insane eyes and one-of-a-kind line delivery thanks to an awful-but-awesome hybrid Russian/Southern/gibberish/whatever accent.

If you can make it through the film’s long setup, filled with numerous laughably bad scenes that include Forest Whitaker’s constant tantrums while his FBI team is tracking Cortez from their base, you are rewarded with a completely cartoonish, over-the-top bloody extended finale that almost redeems the film. As reserved and bland as the first half comes across, the second goes batshit nuts when the “last stand” of the title takes place in the town, complete with torsos exploding, a gatling gun in a school bus, a high speed car chase in a corn field, a wrestling match on a makeshift border bridge and a granny with a shotgun. Yep, that happens.

Schwarzenegger is undoubtedly one of the most beloved and recognizable stars of all time, and now that he’s hung up his hat in politics it’s nice to see him have one last run on the big screen. The Last Stand probably isn’t the home run they were going for, but it’s not a complete failure as a goofy fun action flick. Director Kim Jee-Woon brings a nice visual flair in some creative shots and his ensemble supporting cast really picks up the slack of its aging superstar lead, but it all feels just a bit tired and repetitive. Hopefully Arnold will make some more interesting choices for future films, because his return as a leading action man puts him back on the map with a resounding “meh.”