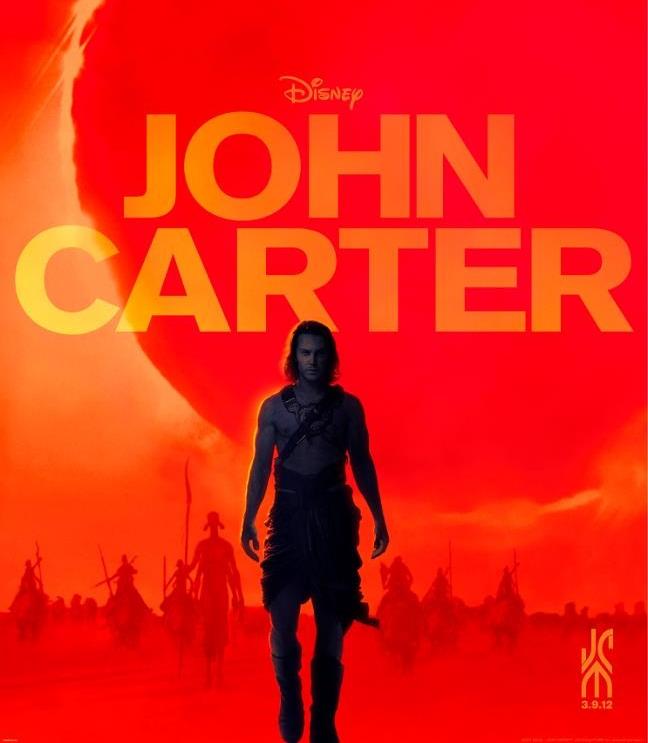 The source material for John Carter is one of the most influential works ever written for modern nerd culture. Sadly the character is fairly unknown to this generation’s geeks, and the title of the film sounds more akin to a boring lawyer drama. Edgar Rice Burroughs’ Barsoom series was the direct inspiration for  Star Wars, Flash Gordon, Avatar and basically all other modern sci-fi, and after decades of trying to bring the property to the big screen, Disney has finally pulled it off. But is it too late for John Carter to have the impact on modern cinema that it did on the generations that grew up on early sci-fi literature? The answer is unfortunately yes, but John Carter is still a beautiful piece of filmmaking and a sincerely fun sci-fi adventure that was decades in the making.

[pullquote_left]The film finds itself taking direct inspiration from the modern films the source material helped create.[/pullquote_left]One of the biggest obstacles facing John Carter and the vast worlds his story inhabits is that the original source material has already inspired so many other franchises, resulting in a film that seems like it’s mimicking others already ingrained in our pop culture psyche. No doubt you’ve seen the gladiatorial scene in the trailers, with Carter fighting wild vicious alien monsters in an arena with insect-like aliens watching and cheering. At first glance, this could easily be mistaken for the finale of Star Wars Episode II: Attack of the Clones. Much of the set pieces and look of John Carter are instantly comparably to that trilogy,as well as James Cameron’s Avatar, so in a strange reversal of events John Carter finds itself taking direct inspiration from the modern films it helped create. Unfortunately, I found myself having far too many “Oh that looks like that thing from that other movie” moments, rather than just being swept away by any of the originality in the film.

Taylor Kitsch (Friday Night Lights, X-Men Origins: Wolverine) gets his first potential blockbuster lead role as John Carter, and I was rooting for him as a big fan of the aforementioned football TV series. Unfortunately, Kitsch is only passable in the role and his performance felt lacking a certain charm and charisma. Don’t get me wrong, he definitely looks the part, and Kitsch is actually quite a good young actor, but he’s just too brooding for this kind of role. In contrast, relative unknown Lynn Collins is spunky and strong as love interest Dejah Thoris, who also happens to be a princess who still needs saving now and again, but can also fend for herself. Mark Strong is uncharacteristically boring as the main string-pulling villain and really isn’t given much to do.

If you’re still reading at this point, you’re probably thinking that I didn’t enjoy this movie. That is actually not the case…

[pullquote_right]The non-speaking characters elicit more of an emotional response than any of the humans.[/pullquote_right]What might be the result of John Carter being the first live-action film from director Andrew Stanton (Finding Nemo, Wall-E), the performances from the CG and motion-captured creatures far makes up for the bland onscreen human performances. And regardless of what the Academy thinks, motion-capture is indeed still acting. Willem Dafoe gives a complex and mesmerizing performance as the alien warrior Tars Tarkas, who uses Carter’s newfound skills to position himself as the Jeddak (king) of his race, the Tharks. Samantha Morton is equally gripping as his more empathetic and timid daughter Sola. Even the non-speaking characters like the adorable speedster dog/alien Woola felt like something right out of one of Stanton’s brilliant Pixar movies and elicited more of an emotional response than any of the real life humans on-screen. The character designs, the voice acting and the nuanced motion capture are just  fantastic, and the movie actually never tops the time Carter spends in the Thark village in the first half of the film, but there’s still quite a lot of spectacle to enjoy in the second half.

On top of the gorgeous artistic choices and character designs, there are some incredibly fun action sequences. Watching Carter discover that Mars’ gravity affects him differently, giving him heightened strength and incredible jumping ability, was hilarious and exhilarating. Once he gets the hang of the jumps and uses them in battle, it’s really cool and used unlike any onscreen super power we’ve seen yet. Who thought jumping really well could be a cool super power? It’s also worth mentioning that the 3D is not gimmicky and never pulls you out of the experience, resulting in one of the best uses and execution of 3D in a film that I’ve seen to date.

One final negative that has bothered me to no end is the fact that the film takes place on Mars (Barsoom), yet the sky is a clear crystal blue and looks more like the Arizona desert. I know it’s only a minor detail, but this is freakin’ Mars! All the classic Princess of Mars artwork has the red cloudy skies of Mars that gave it a distinct look. Just seems silly to have the planet be revealed as Mars but do nothing that distinguishes it as Mars.

John Carter is an old-school good time, reminiscent of the early sci-fi serials of Hollywood yester-year. Normally, this is the type of movie that would be reserved for a summer tentpole, but Disney was cautious with this large and expensive film, wisely positioning it in the normally drab spring box-office season where it could find time to gather interest and hype. Not that John Carter couldn’t possibly stand on his own eventually, because the film succeeded enough to get me excited about the prospect of future visits to Barsoom and the adventures that await.

SECOND OPINION
John Carter is hampered by a messy script and a headlining cast that lacks both the charisma and the talent to carry a blockbuster franchise. It’s almost embarrassing that the motion-captured aliens are far more emotive – not to mention infinitely more interesting – than their human counterparts. That being said, the film is an enjoyable sci-fi romp with some truly stunning visuals, and is definitely worth a look if you don’t mind feeling a sense of déjà vu.
3.5 stars
— Brent